So I have almost recovered now from the Oktoberfest, having been now back home for over a week. I still have bruises, am still tired, but the hangover has at last gone. Just. What will not fade ever is the memory of it all. It was utterly fantastic, and way way better than I expected it to be.

For those who don’t know, Oktoberfest is a 16- to 18-day festival held each year in Munich, Bavaria, Germany, running from late September to the first weekend in October. It is one of the most famous events in Germany and the world’s largest fair, with more than 6 million people attending every year. This year I think they had 6.4 million people. It is a combination of a massive fairground, and massive beer tents, holding between 6,000 and 10,000 people each. The drinking starts at breakfast time and continues until everyone cannot drink anymore, which for some is by lunchtime.

Beer is drunk by the ‘mass’ or litre, and served by frauleins wearing traditional dress – the ‘dirndl’ as it is called. It costs about €8.80 a pop, or call it a tenner by the time you have given a tip. It is glorious! So here are some piccies for your delectation and delight -I have put on here only the ones that are suitable for a family audience, as it were:

So the above was taken at about 10am in the morning, before the crowds got going. Suffice to say it was bedlam by the evening. Here also is the inside of a tent, the decorations are amazing:

The inside of the Hacker-Pschorr tent, breakfast-time

Generally at about noon, the singing gets going. For the majority of the afternoon it is a mixture of singalong stuff ranging from oompah music to almost country music (“Take me home, Country Roads” was played I do not know how many times). Every fifteen minutes or so, no matter what is going on, you have the ubiquitous German toast of “Ein Prosit”. Here is an example if you don’t know it already:

The above is a fairly tame version I found on YouTube, but you get the idea.

If you are sensible, after a couple of beers or so, you go and get some fresh air and wander around the fair. It is massive – here is a picture taken from the big wheel, although much of what you can see seems to be beer tents from here: 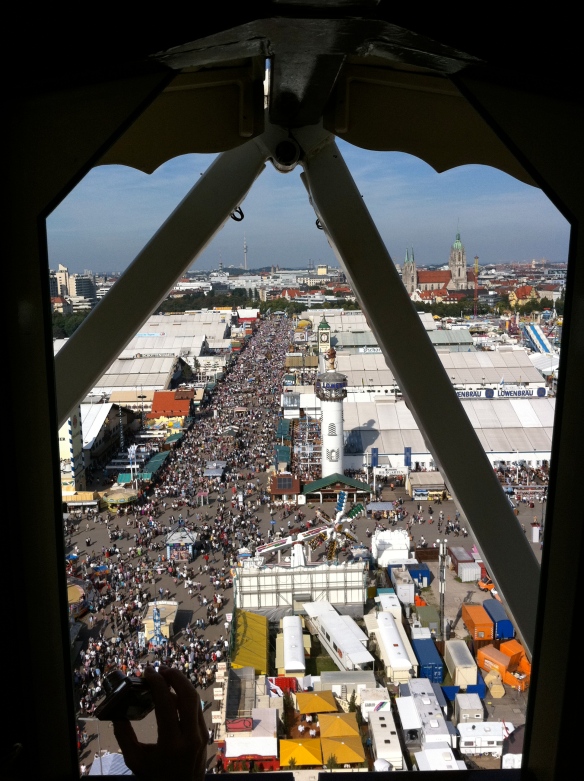 As the day goes on, if you are still capable, you get to experience an evening. I can only describe the evenings as completely and utterly insane. Imagine about 10,000 Jim Carreys at his wildest, on acid, and you are half way there. The music takes you from Abba to AC/DC, from Robbie Williams to Frank Sinatra, from “Sweet Caroline” to “Sweet Home Alabama”. You know the words to every song, and you sing your head off. You stand on the benches or on the table, because everyone else is doing the same, and you act like a demented drunken idiot, because in fact that is exactly what you are.

Somehow amongst the hats, the chicken (best chicken I have ever tasted by the way, strange but true), the lederhosen, the singing, the endless litres of beer, the funny t-shirts, the dancing, and the most cosmopolitan atmosphere you will ever witness, everyone has the most fantastic time ever. The atmosphere is nothing short of brilliant, at every moment. Some more piccies for you:

Need to get this T Shirt

I have tried to upload Sweet Caroline on video – to give you a little idea of just how well we all can sing:), but it doesn’t seem to have worked – oh well, probably just as well!

I will leave the Oktoberfest for now, and then tell you about in my next post about the Zugspitze, which was certainly a tale of two distinct sets of weather, and a lesson in respect for mountains.