Day Six began in rather slow fashion, as today would be the day we went up to the Mountain hut at Vignettes (3,140m) ready for the summit attempt of Pigne D’Arolla (c. 3,900m) early the following day. We therefore effectively had a lie in, as we did not need to leave the hotel until 9.30am.

Just packing for this journey was difficult however, as the weather had turned against us and it had rained all night. It was due to be cold overnight also, certainly below zero, and therefore we needed wet weather gear, a lot of layers and warm clothes, as well as crampons, ice-axe, harness, helmet etc., and then plenty of water (I took four litres) and snacks etc for the two day trip. My rucksack, despite me depserately wanting to travel as light as I could for this one, was absolutely bursting at the seams.

We set off from Arolla (2005m) right on time and began the ascent through woods and alpine pasture – it was quite serene: 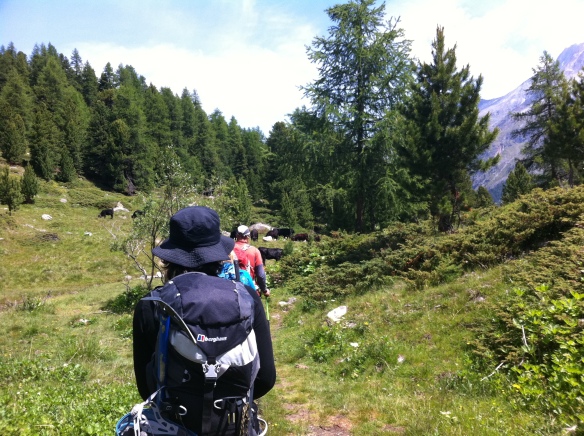 A calm and gentle start at the bottom of the valley..... 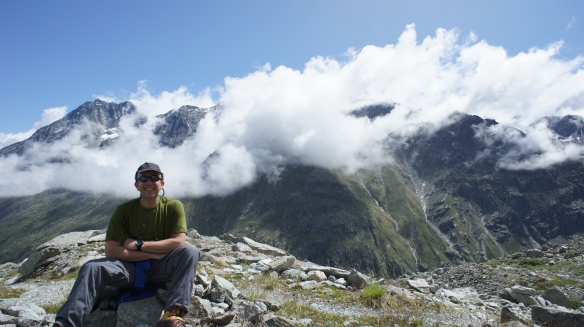 ....before stopping for a breather on the way up.

The walk from there got tough as the path wended its way up the mountain, and steadily approached the glacier up towards the Vignettes Hut. The weather began to get steadily warmer, and I began shedding layers and drinking copiously as the sweat began to pour. All week I have been the weakest climbing uphill of the four of us, and this began to show again as I lagged probably 40m behind at times. I began to wonder if I had it in me to get up the glacier, particularly as we would be roped in – there would be no room lagging behind then.

The walk was great however, and began to open up views of the glacier: 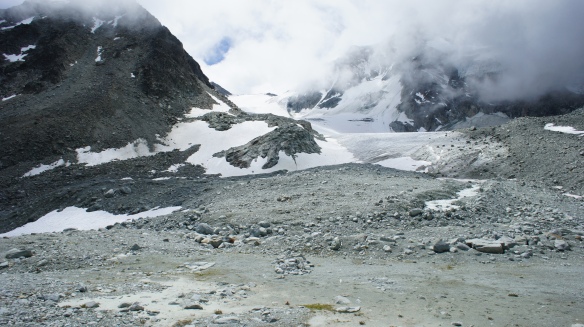 The Piece glacier comes into view

Some of the rocks on the path on the way up were steep, necessitating handily placed ladders screwed into place to get up them: 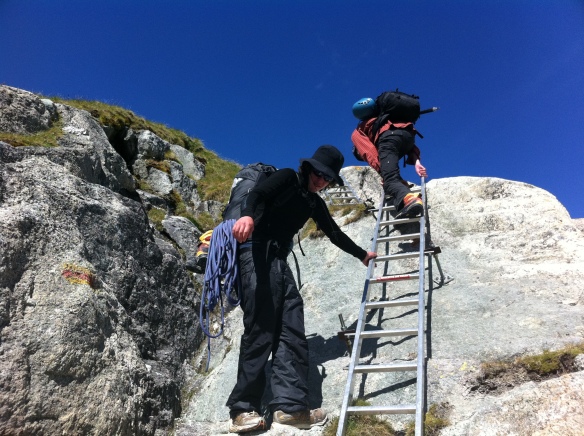 On the trek up to the glacier, ladders lead the way.

And the mountain itself, which still seemed impossibly high from even where we were. 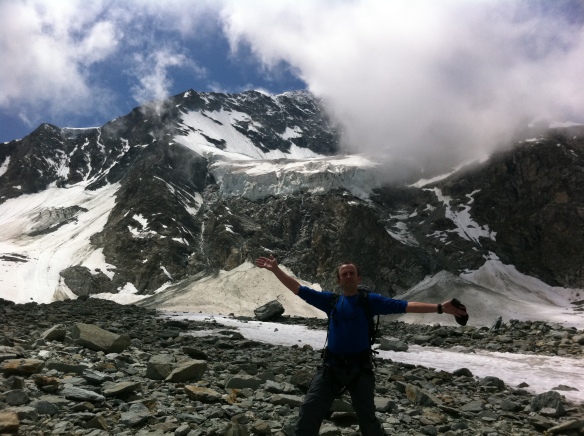 The top of the Pigne D'Arolla is up there somewhere - looks like mountain madness has gotten hold of me though!

We eventually got to the Pièce glacier at about noon. I seriously thought about telling Andy that I would stand down if he asked me to. I knew his answer would be something along the lines of “well it is up to you”, and so that made my mind up – I was going on. I hadn’t come here to quit anything – I was here to climb mountains!

The walk up the glacier was unmercilessly hard and slow, basically because it was now very hot and sunny, making the effort of climbing in crampons very hot work with all that weight on your back, but moreover because the snow on top of the glacier was melting. This meant that every footstep sunk into the snow, up to your knees at times, and on the steep sections this was really tough. 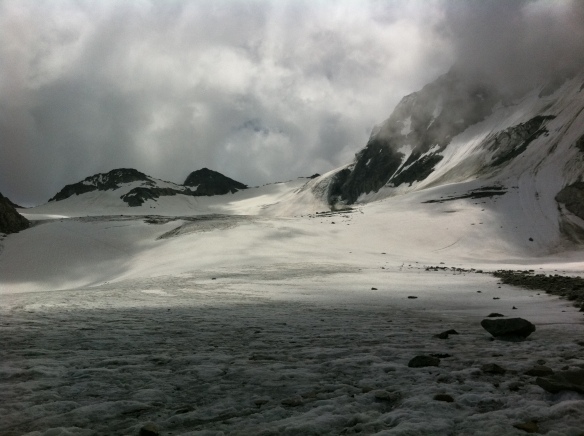 View from the start of the glacier towards the Vignettes hut, which is over the ridge at the top.

I was happy overall in that I struggled no more than the others, but the walk seemed to take forever. We reached the hut at about 3.30pm, having spent about 3 hours on the glacier, and six hours in total, to get to the hut. It just never seemed to get any nearer. I have almost never been so glad to get anywhere, ever. 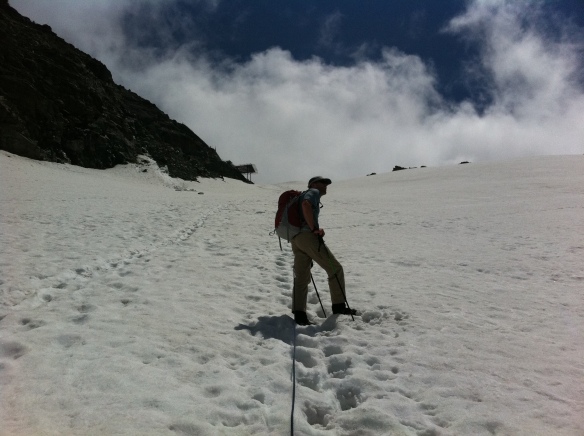 The hut itself was perched improbably on a ledge facing a number of peaks, in an absolutely breathtaking position, and not one for vertigo sufferers: 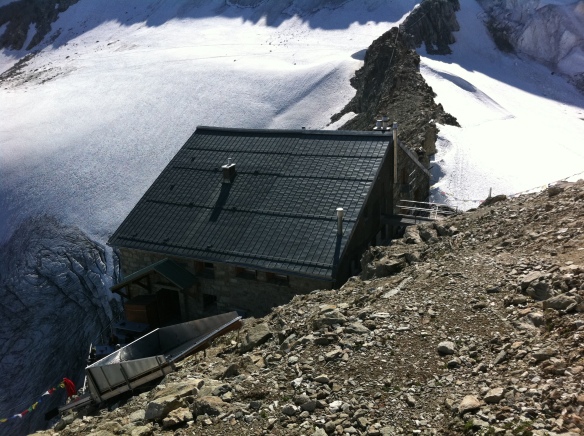 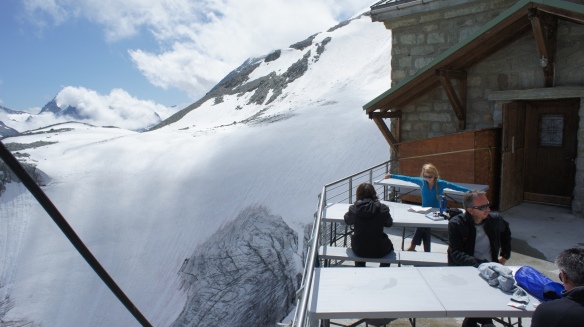 And here is a panorama shot from the door of the hut:

The hut is a step above the Aguilles Rouges we stayed in earlier in the week. It accommodates 120 people and the facilities are second to none. The bathroom and eating facilities were superb. We had a dormitory which slept 10, and we shared it with another Jagged Globe group who were doing the Haute Route (a seven day trek from Chamonix to Zermatt, using huts all the way along). Probably around 30 or so people were staying in the hut altogether. 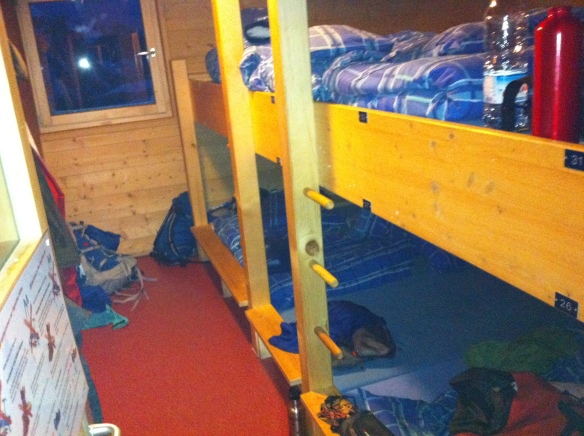 Our dormitory for the night, quite cosy really.

After a very pleasant beer on the balcony bar, you could walk up to the summit just above the hut and see the route for the following day. It looked really intimidating. I was not sure at all whether I was up for it, and shared this with Kelly. She said that she hated the thought of crevasses, which bother me less, so it just shows you how we are all wired differently. 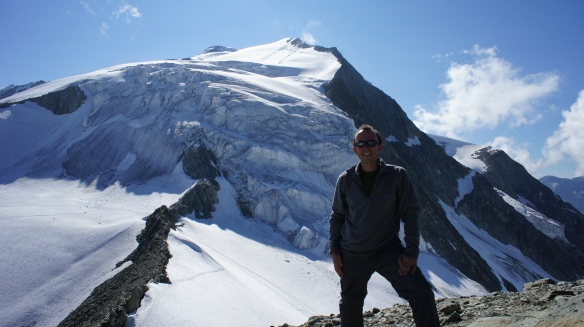 Looking at the massive drop from the terrace bar, all of a sudden there was a huge avalanche/serac fall. It is the first time I have heard and seen an avalanche, and the noise is deafening, even from some distance away. Strictly speaking this was not an avalanche, it was actually serac fall. A serac is a large chunk of glacial ice, and in this case it was huge, and incredibly powerful as it cascaded and broke on its way down the sheer face of Mont Collon. Seeing this sort of thing puts life in perspective, and you realise that if one of these things fell whilst you were underneath it, you would have no chance of survival. 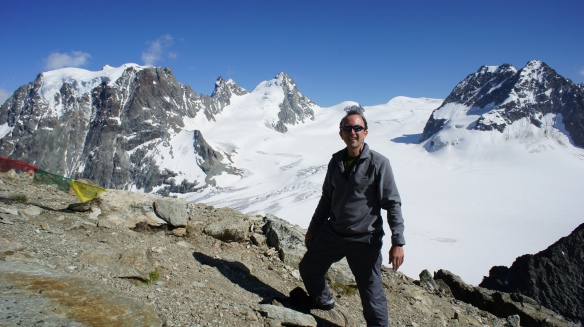 Mont Collon (far left) - moments later the seracs at the top would come tumbling down.

As the sun began to set, the temperature outside plummetted. We were at 3,188m (10,490 feet), and the forecast was for -7 degrees overnight. Time to head into the warmth of the hut!

So after a great dinner of minestrone soup, pasta with pork and ratatouille, and then chocolate eclairs (washed down with a few glasses of red wine for good measure – we made three bottles disappear this time :)) it was off to bed. I think we made it until 9pm until we retired.

4am would arrive way way too early tomorrow for our summit push, but the forecast was at least for clear (and cold, which is good) weather…..I lay there very determined now, despite my anxieties, that I could make it. I would at least try – this was what I had come for – it was my day of days. Come on!!