Today was one of those days when you try to get your head round things, but never really manage it. The cause – altitude. AMS or Acute Mountain Sickness has several forms, and at their most extreme can kill. At its mildest, AMS means a bad headache, loss of appetite, a feeling of nausea, and dizziness. Sadly I was to get all four of those symptoms today.

I had what I think was actually a reasonable night’s sleep, and was woken by the porter bringing bed tea at about 6.15. Looking our of the window down the valley we were greeted by another cloudless sky, and this time a very sharp frost. We are at 3,800m after all. After a quickish breakfast, we were on our way for the longest walk so far, to Dingboche at 4,350m. 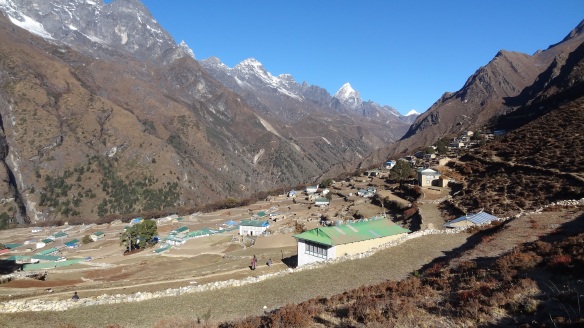 Leaving Phortse behind on another gloriously cloudless morning.

The walk began very steeply on frozen ground, and I struggled from the outset. Getting clothing right was hard at first too, as it was extremely cold in the shade, but already warm in the sun’s rays, and so walking uphill meant you would perspire very easily no matter what you were wearing. After about half a mile I felt very much out of breath, and hoping that this wasn’t going to be a very bad day. I thought my heart was going to burst out of my chest at one point.

The path however was a spectacular one, traversing a hillside with precipitous drops on the right hand side, and much easier overall than the first half hour or so. My fear of heights meant I looked to my right (where the drop was) a lot less frequently than I perhaps should have done in order to best appreciate the scenery, but this was already becoming a head-down sort of day in more ways than one. The views though were again breathtaking. Ama Dablam edged ever closer to us and I had to stop myself taking photographs every five minutes or so, but this mountain is just so tantalising and mesmerising in every way. 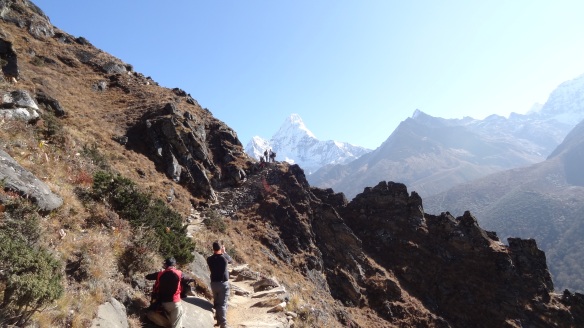 Ama Dablam in the distance as we traverse the mountainside 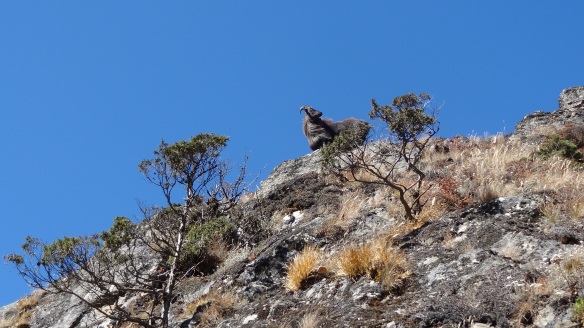 A mountain goat on the rocks behind our path

It's that Ama Dablam again - it keeps creeping up on you...

We stopped for a tea break at Pangboche (4,000m), and by this time I was feeling pretty crap. My headache had started, and I was struggling at times to place my feet in the right places, which is dangerous at best on a walk with a sheer 2,000ft drop on one side of it. We then carried on towards Shomare, at 4,120m, which would be our lunch stop. By this time I was feeling decidedly worse, and actually wondered for much of this section if this would be as far as I got in the Himalayas. I was just so frustrated at this point.

At the lodge at lunch I told Ngima, our guide, how I was feeling. He gave me some Paracetamol, and whilst they did not remove my headache, they allowed me to function enough to make me know that I could carry on at least for the shorter afternoon session. I tried to eat (and in fact did) my normal lunchtime order of Spaghetti with tomato sauce, but was not at all in the mood for it.

The quite staggering bulk of Lhotse (28,000 feet) comes into view in the distance

By this time the clouds had rolled in up the Khumbu Valley, and with them a stiff breeze, which though thankfully at our backs, made me feel cold for the first time since I have been here. We all thus layered up, with a fleece, a buff and a woolly hat now essential.

This last section of around 2 hours was pretty much all uphill, as opposed to the more undulating terrain of the morning, and was slow going for me. It was hugely rewarding though, as we were now greeted with the enormous bulk of Lhotse right in front of us. Lhotse is just gargantuan in every way, seemingly as broad as she is wide, and at 8,501m, the fourth tallest mountain on earth. Lhotse now became the mountain where there just weren’t enough superlatives to describe it. Oh and yes, peaking just above Lhotse and Nuptse’s mass was a glimpse of the summit and snow plume coming from Mount Everest herself.

The landscape began to change quite significantly now too. We were now well out of the tree line, and in the high Himalaya.

I reached Dingboche walking on my own, well behind the rest of the group, but supported by both Ngima and Pasang, our guide and assistant guide respectively, so I was in good hands.

Upon getting to the Peaceful Lodge in Dingboche, our home for the next two nights, at about 3pm, I went straight into my sleeping bag and slept for about two hours. I did not feel at all good upon waking, and I tromped to dinner wondering if I could manage to eat anything, and whether this would be the highest I get here.

So the ‘making sense of it all’ bit at the start of this post was about reflection. On life, and why we are here, and what we, or I want to do with my life. I spent some considerable time thinking about it today, I suppose because feeling ‘ill’ (I’m not ill of course, I’m just feeling sorry for myself) makes you feel a little more remorseful/contemplative, or makes you want to put things into perspective anyway.

In my fuddled attempts at conclusions on the above, my thought processes came to the following conclusions:

1. I don’t want to put my body through this again. I was walking looking at the south face of Lhotse, and realised to myself that I am at best delusional if I think I could ever aspire to get as high as that, and I simply know that feeling as I do right now, it is not going to happen ever.

2. I suddenly want to be at home, be in a nice garden, and to get settled down again, in a pretty place, and still travel when I can, but not alone.  Deep huh? Well mountains can do funny things to you (not that there is anything funny there, but you know what I mean), and this is what this one did to me today.

Tomorrow will I think be a make or break day for me. We will be heading up another 700m or so, to above 5,000m, or 16,500 feet. We will climb to a peak called Nangkartschang and then back down again on what sounds like a brutal acclimatisation walk, and it will be at the crack of dawn too, like 5.30am. I’ll be there.

I wanted most of all this day just to feel better, to be able to better appreciate all that is around me. I love my surroundings, they are utterly stupendous, and you should be able to take them in better than I was able to today. I’m not giving up though, I have to see Everest up close at the very least. That may be my revised goal on this trip, we will see….