So one good thing and one bad thing already happened to me today, and it is only 7am.

Firstly the good news – wait for it….. I slept through the night! I could not believe it when I woke up at 5.35am, and I hadn’t stirred since about 9 last night. That is literally my best sleep in the Himalayas. I will put it down to the four Everest beers that I had last evening, they obviously did the trick. Maybe today I will have six and sleep for ten hours, who knows.

Then the bad news, or should I say the boring and predictable news – yes it is still raining, yes the cloud is lower than even it was yesterday, and yes the prospect of the weather changing for the foreseeable future is not even close to slim. We are in the clouds, it is as simple as that, and Kathmandu is also cloudy, so no planes will fly here for a fifth consecutive day, and my third day of being marooned here.

The North Face Lodge is looking like some sort of refugee camp now. I am very lucky to have a bed, but have no idea if I will be able to keep it. Everything is so damp though due to the weather, that you wake up damp, your clothes are damp (and unspeakably dirty of course, there is nowhere to wash much less to dry anything), and it makes you even more miserable. There is in fact no running water here at all any more, which makes washing impossible other than (and thank goodness for them) with wet wipes, and the whole toilet situation a bit, well, smelly let’s just say.

I exhausted the shops yesterday and am running out of rupees, and so am not sure how much longer I can hold out. If yesterday was a looonnnnnnng day, then today is going to be longer still. More later……………

So it is now 7pm, and I got promised a helicopter at about noon. Apparently an army 24 seater helicopter was going to fly in, Apocalypse Now style (is that the right film I’m thinking of?), and I can pay $600 and be transported off into oblivion, or Kathmandu, whichever I get to first. I agreed to it, more readily than I thought I would, as I really just want to get out of here now. Somewhat predictably, the helicopter never comes. I am only glad that I didn’t pay my $600 first.

Trouble is, the weather is actually getting worse. You can now see about 50 to 100 yards in any direction. The bigger trouble still is, that in Kathmandu where we are trying to get to, some 5,000 feet below us, the weather is actually worse. They even cancelled the international flights there today, and so the chances of a single-engined ironing board with an outboard motor landing at the world’s most dangerous airstrip are laughable at best.

The runway, or all you can see of it, at Lukla.

I gave up even hanging around the lodge in the end. In fact even the shopkeepers here have given up trying. Normally the Nepalese are very good, they don’t actually pester you too much. They do try to help you however when you go to their store. Now however they have seen the same faces walking backwards and forwards all day long. It is like Shaun of the Dead versus Zombie Dawn at altitude. 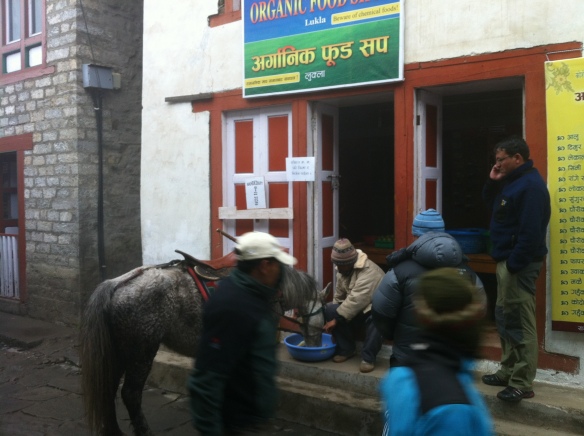 So my afternoon was a couple of hours in ‘Starbucks’ (that’ll be fake Starbucks, a bit like the ‘North Fake’ clothing that you see everywhere). I caught up on emails, caught up on what is happening at work (yes I was that bored), and caught up on Facebook etc too, putting up my Kala Pattar Everest picture up there, of which I am really proud.

Everyone else is just hanging around in the rain.

When 4pm came I went to the Irish Pub, which is becoming my local now. I walk in there now and the bartender puts a Tiger Beer in front of me before I ask for it. I am part of the furniture it seems – which is fine with me. I am stuck here for as long as I am stuck here, and that’s just how it is.

Back at the lodge in the evening I got in with a crowd from Canada and Germany playing card tricks. It whiled away at least 45 minutes of my life, which was a good thing at the time.

I am not even making any predictions for tomorrow. When I was in Fakebucks I checked the weather forecast. It is shocking through at least Monday (this is Friday). I therefore have at least three more days of looking at the rain, and then the people round at the airport have a week’s backlog of really really really pissed off people to try to process through an airfield with no controls, no gates, no nothing. It is going to be an unholy free-for-all on an epic scale.

I shall have a few more Everest beers now and sign off. If I could sleep for the next two days it would be a lot better than what I will actually face. Oh well, at least I am still in the Himalayas (well sort of, even if I cannot see them).

Instead of doing daily updates, I’ll return now to this only when I know for certain that I am heading out of here, to save anyone reading this with as much boredom as I am suffering from right now.

Here’s hoping it’s not too long before that happens………..