Waking up in strange surroundings I should get used to, but somehow I never do. Today was certainly no exception. We (Verena, Susanne and I) were in the Klingler Hotel in Maurach, Austria, and I woke to find rain and wind and also feeling quite disorientated.

We had expected the weather to be outstanding this morning. In fact the forecast for Innsbruck, the nearest place to where we were headed, was for cloudless skies and 33 C. The rain (and it was tanking it down) therefore was rather unwelcome to say the least. It was also distinctly chilly.

Breakfast was however wonderful, and afterwards we set out with rather mixed feelings about what the day would bring. We needn’t have worried however, and within about 10 minutes of setting off for our destination (only 30 minutes away), we were in bright and beautiful sunshine.

Then however after arriving in Absam, just east of Innsbruck, we hit our first snag. We were looking to park, nicely mapped out by Verena, at a place called St Magdalena, at about 1,300m. This would let us get to our planned destination (and accommodation for the night) the Bettelwurfhutte. The Bettelwurfhutte was at about 2,100m, and would allow us hopefully to a scale a peak or two after lunch.

However, upon coming to a dead end half way to St Magdalena and enquiring of a very helpful local lady (in fact everyone in Austria throughout was just so friendly and helpful) she told us that this was the furthest we could go. This was not good, as we were barely at 700m, leaving us with the thought of 1,400m of ascent before lunch, which was a tall order at best.

The Karwandel Alps – the trail would start here

We then thought we should ring the Bettelwurfhutte to tell them of our arrival and to book our accommodation in case things were busy. Susanne looked somewhat shocked to be told that there was nothing at all to be had. The place was literally crammed full.

Ringing ahead to hopefully get us some beds for the night.

We then spent a further 30 minutes or so (rightfully) trying to contact other huts to see if we could get other accommodation. The long and short of it was that everywhere seemed to be either full or on an answer machine.

In the end we just decided to go for it. There was another hut apparently a further two hours or so from where we planned to head, although we couldn’t reach that one by phone either, but to delay the trip further (it was already 10.30am with perhaps six or more hours walking ahead of us) would have wasted too much time.

Within probably 20 minutes or so of walking up a steep road, just to reach the start of the trail, the heat was really taking its toll. The forecast temperatures for the day would prove to be correct and the sun beat down relentlessly from here on. 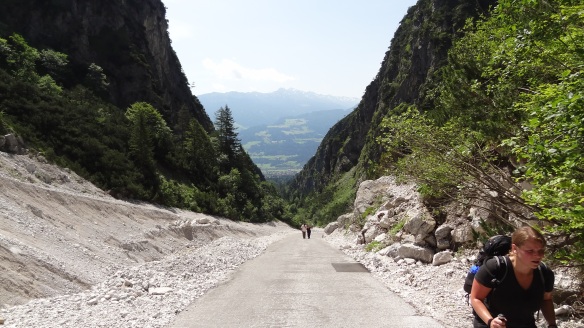 The trek started up a steep road at first…

After an hour or so, we reached a path which would lead us to the original destination (the Bettelwurfhutte). There were three paths in total. One of them was labelled ‘Klettersteig’, which was out for us as we did not have harnesses or via ferrata equipment with us. The other two paths looked long, and as we did not think we could get accommodation at this hut anyway, and after Verena and Susanne took the advice of a very helpful local passing shepherd, we decided not to take this route.

The climb up towards the Bettelwurfhutte

We duly marched on headed for the other hut, the Hallerangerhaus., which from our our current position was apparently a further 3 and a half hours. That may have been true for a fit Austrian (for whom the signboards must have been made) on a coolish summers day. This however was sweltering, and I couldn’t walk for more than about 50 paces uphill without stopping to wipe sweat from my brow and catch my breath. It was simply draining.

The walk was however beautiful:

An alpine meadow looking in the direction of the Stempeljoch, which would be tomorrow’s destination.

From alpine meadows with beautiful tiny flowers, to hillsides scattered with Edelweiss, to towering peaks around 2,000m above the valley floor, the Karwandel Alps were certainly proving to be everything I hoped they’d be and more.

Looking south from the approach to the Hallerangerhaus

The walk ultimately took us around 6 and a half hours. This meant that there was no time for other peaks along the way, but this in no way detracted from the day. Ultimately it was too hot anyway for serious hill climbing. Even when we reached our resting place for the day, the Hallerangerhaus hut, the temperature was 28 degrees C, and this at 1800m. 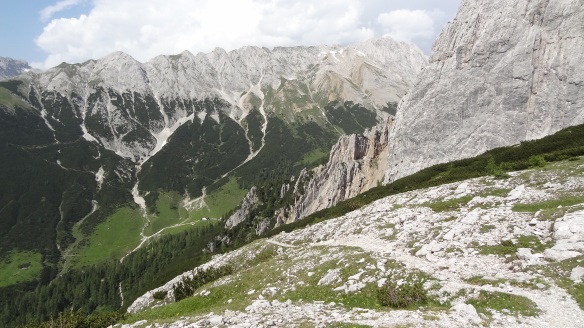 From the top of our ascent for the day, at about 2,200m, looking down towards the Hallerangerhaus in the distance in the valley

And a closer look at the Hallerangerhaus, our destination for the night.

Dinner was a perfectly cooked Vienna Schnitzel (well we were in Austria after all) washed down with a few glasses of Austrian beer. From the terrace of the mountain hut (we literally sat outside all evening it was so warm) we saw an amazingly beautiful sunset, and were entertained by the local hutkeeper and his wife. The hut was completely full, and we were ultimately lucky to get a place for the night at all. 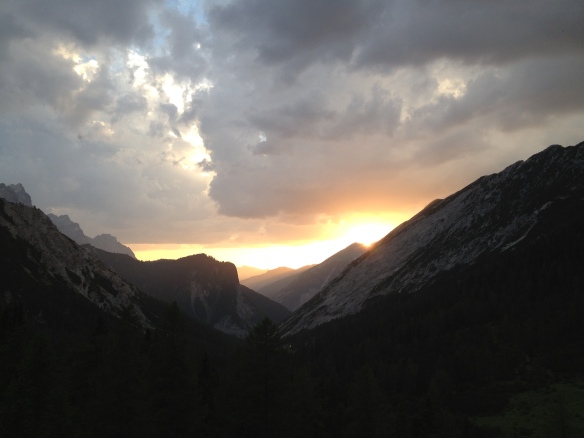 Sunset over the Karwendel

In the morning we would climb back up the hill we had just descended and head to the Pfeishutte. We had seen glimpses of the path we would go on on the way today, and it looked great. This trip was already going too quickly!