So here we were, sitting in the Riemannhaus hut in the middle of a very bleak looking Stony Sea in the Berchtesgadener Alps, with rain lashing against the windows. We had a choice now of going out to trek for three to four hours up a snowy gully to reach another hut (the Ingolstaedterhaus), or staying put, getting warm and dry, and staying the night where we were.

After debating for a while, we decided that going on was really the only choice. We were there after all, and you have to make the most of it, come what may! After donning some rather damp waterproofs and braving the teeth of the wind, we started out on our way. I am not sure if there was anyone else out there at all, but we perservered, and were so glad that we did.

Shortly into the walk it began to snow, which was not quite what we had expected for July, but we were up at about 2,400m, and the clouds were very low. We decided that we would just have fun on the way instead – we were not going to be able to climb anything, it would have been too dangerous. 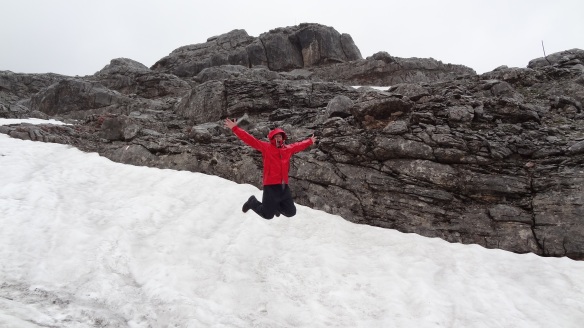 Having a bit of a lark around as the snows came down…. 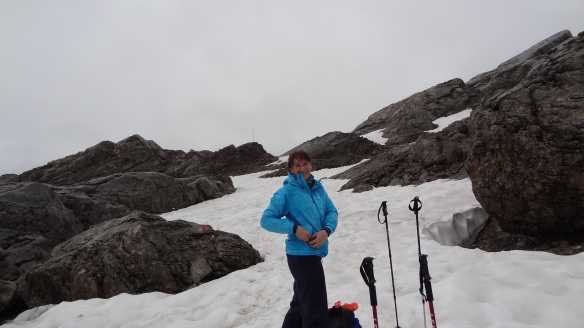 And Anna putting on a very brave and happy face as we headed off up on one of so many snowfields.

After a couple of hours of walking, the clouds began to suddenly lift, which was as unexpected as it was welcome. The temperature began to rise and we could actually see ahead of us for a change. It made a big difference to the progress we were able to make. 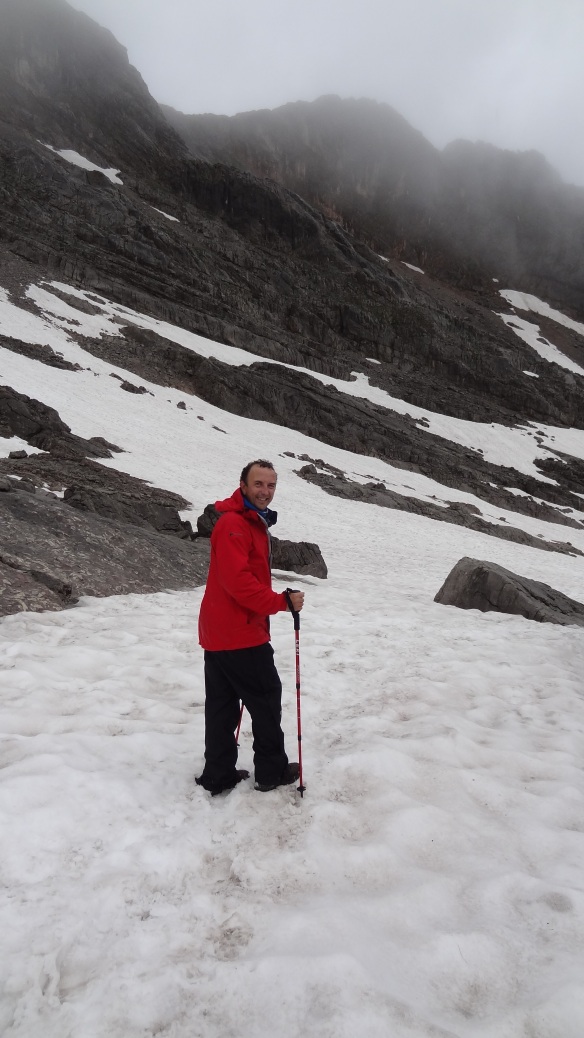 The mood lifts along with the clouds…..

One of the surprising things about this whole trek was just how much snow there was still around. Most of our walking was at between 2,000 and 2,400m, and the snow looked to be a good two metres deep in places. 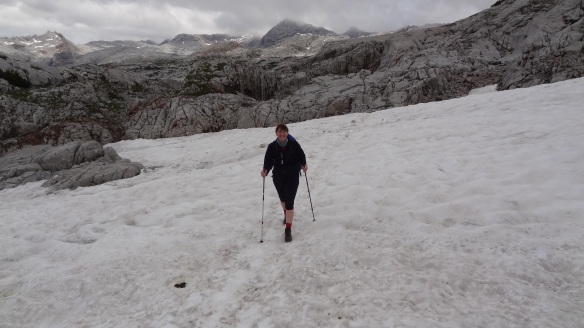 Another snowfield to cross…..the landscape of the Stony Sea finally visible in the background.

Eventually the waterproofs came off altogether, and we were able to walk at a much better pace. 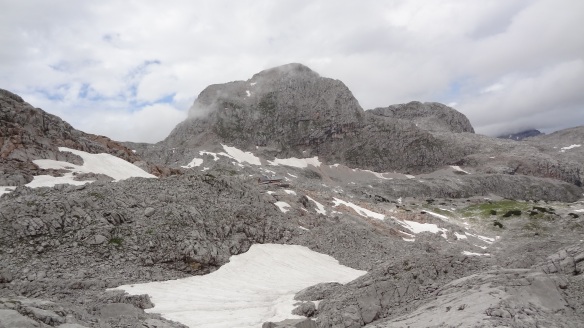 And finally the Ingolstaedterhaus (centre of picture) comes into view in the distance.

The Ingolstaedterhaus seemed to take forever to reach, but was a very welcome sight at what had been along days walking. Had the weather been kinder I would have loved to have climbed up the peak behind the hut, but even though the clouds had lifted by now it was probably a bit of a gamble still, so we got booked into the hut and got our wet stuff off finally. 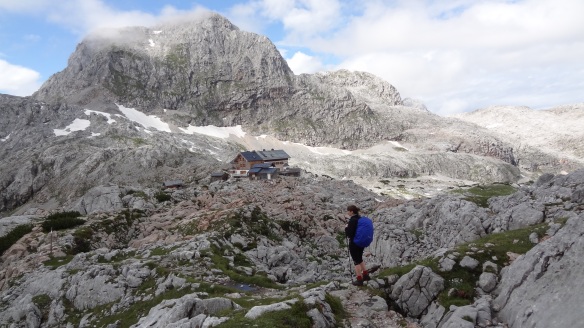 The Ingolstaedterhaus looms ever closer….. 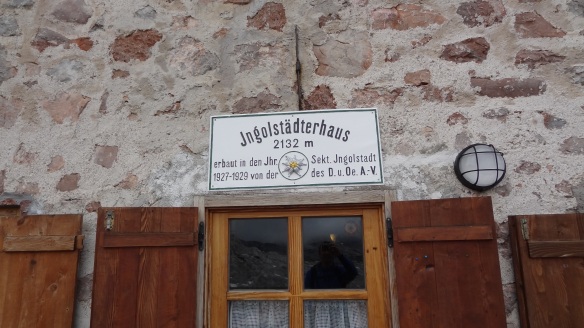 …and finally we are there 🙂

The views from the hut were quite stunning now that there was some visibility, and we even managed a beer on the terrace outside – well it would have been rude not to really! 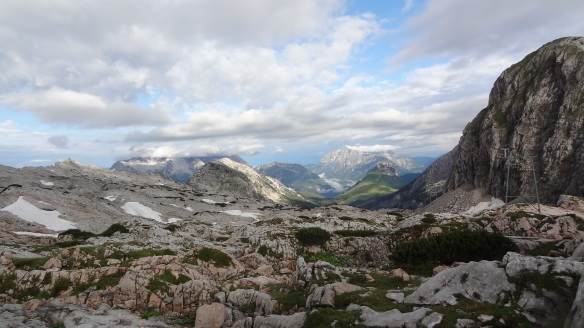 Westerly view over Austria from the terrace at the Ingolstaedterhaus

After some very suitable Austrian food (Schnitzel followed by Kaiserschmarm, what else?) and a few beers and a glass of wine or three, the end of the evening came rather quickly. The Ingolstaedterhaus was pretty full, and a great place to stop and stay if you are ever in the vicinity.

The next morning we had an early start, as we had a lot of miles to cover. It was our final day in the mountains and had to get back to Munich that night for an early flight back to the UK the day after. The trek back to the Funtensee was around three hours, and then another three back down to the Königsee in what was one of the heaviest downpours you will ever see. It was a great walk though, and the rain didn’t bother us in the slightest, it was just great to be there.
All in all, this (despite the mostly shocking weather) was just a great trip. The Bertchesgadener Alps are a stunning location, with a great deal to offer from a trekking and also a climbing perspective, and the Stony Sea is almost like no place I have ever been to. Many of the routes that we passed were graded black and required technical via ferrata equipment, so there is something to offer everyone. With great huts and fine Austrian hospitality, I’d thoroughly recommend the area, and would love to go back there sometime.