We’d been told to expect another hard day today, but not as bad as the day before (Chumpon to Ranong). If anything however, this was the toughest day. This was caused at least in part by the fact that it ended up a rather large hill (well not that large, but large by Thai standards).

Today just basically undulated and undulated. Unlike some of the flat roads on the Gulf of Thailand side, the Andaman Sea side is quite different. Most of the ride was also inland, and in fact we never saw the sea at all today.

Sunrise from the Tinidee hotel in Ranong.

Heading out of Ranong early in the morning, and seemingly busy for a Saturday, we were soon back out onto National route 4, which is for the most part a very quiet road and a single lane in both directions. We made great time first thing whilst the air was cooler, and notched up around 40km by our first stop. Suwat brought us our customary bananas (Dirk’s favourite!), watermelon, jelly drinks, electrolyte drinks, pineapple and the like, and it was all delicious as always. 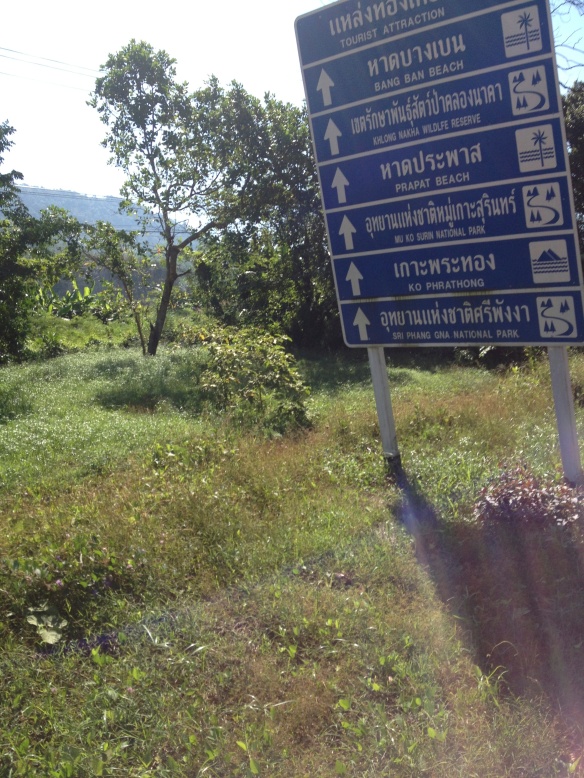 We’re on the road to somewhere….

…..and geting closer to Phuket (our final destination) all the time – we’ve now done 600km already!

The area down in this part of Thailand is principally Muslim, and the waves and greetings from the local children were all just as friendly – we just noticed headdresses and mosques in plentiful supply.

We stopped for lunch at a little place next to a petrol station which was just fantastic food. We had soft shell crab, red snapper, chicken with cashew nuts, prawns in garlic, and a green curry. The service and hospitality were just perfect. It’s was yet another example of a place where if you had been passing you would not as a westerner even think to stop, and yet what a chance that would have been missed! 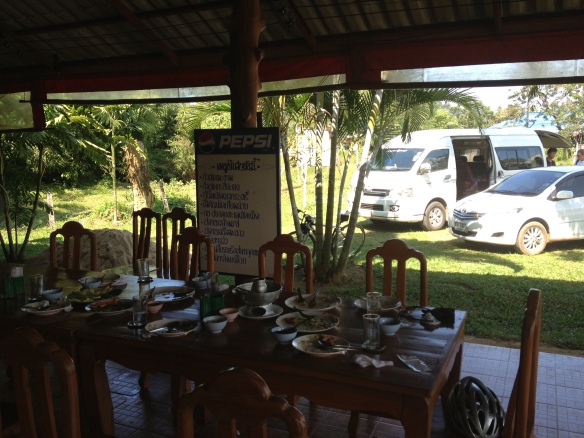 We had covered 92km by lunch, and so in theory the afternoon was a fairly easy haul, as it would be only 34km or so. This didn’t prove to be quite the case however, as first Esso, then Phillipa, then Esso again, punctured, and each stop in the blazing heat took its toll. The difference between moving with wind resistance and stopping, even in the shade, is quite severe when it is 35C out there.

It’s easy to smile, even with a puncture, when you have a friendly man in a support van to come and repair it for you!

And then of course there was the hill at the end. Never overly steep, but at around 5% average and about 2 or 3km in length, it was hard work, exacerbated by the fact that Esso and I pushed it pretty hard. I was wiped out by the time I got to the Greenview Kuraburi resort.

I was so tired when I got there that I didn’t even have the energy to go for a swim, but instead just relaxed and sat around looking at the lovely scenery, which was amazing. The resort was on its own in the jungle, and set by a lake. The noise from the cicadas was almost deafening. 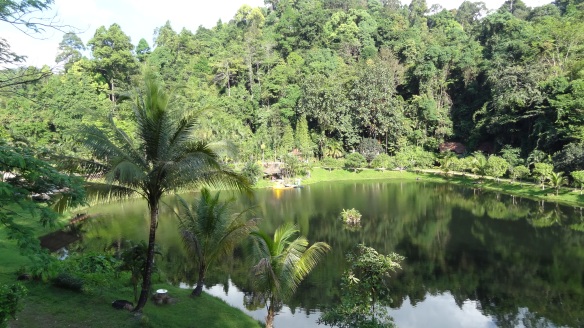 View from by room at the Greenview Resport, Kura Buri

Today had wiped everyone out I think. Dirk in particular was pretty drained for most of the day as he was still recovering from his bout of food poisoning. 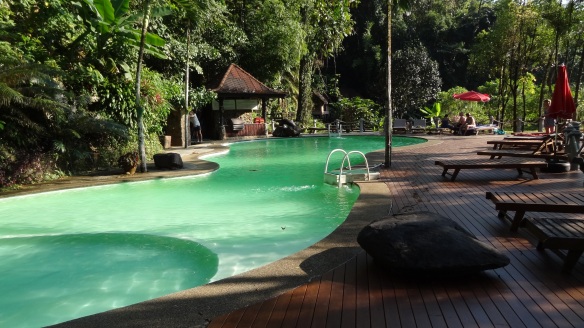 The pool at the resort.

Dinner was a fairly low key affair at the hotel, but of course delicious as always. I think we saw no other westerners at this hotel at all, the last time we would be so ‘remote’. This for me was a shame, as ultimately I loved the ‘real’ Thailand much more than the commercialised areas.

The following day would be a short one, only about 45 miles, as we would be doing some sightseeing of the area hit badly by the 2004 tsunami. I think everyone will appreciate the comparative rest after about 400km being covered in the last three days alone. We are also yet to see a cloud, not that we are complaining at all, but it does take its toll in terms of sapping the energy.

And finally the stats of the day are as follows, another 80 or so miles done: