The first day (and night) of the Elbrus trip was basically all taken up with travelling. Oh and packing, and of course faffing. I am a terrible last minute faffer when it comes to travelling generally, but worse still when it comes to trips to the mountains. I feel the need to pack and unpack several times, despite the fact that my kit has been laid out in order for several days and ticked off a list.

I also find that I have the need to buy things last minute. I will look at the “recommended things to take” some weeks in advance, and know that some things I must have, and others are at best superfluous. I then find myself in a last minute flap when I simply must have those items on the last day.

Take today for example. A matter of hours before I leave for the airport I am buying a silk sleeping bag liner and an insulated tube for my Camelbak. Oh and a half litre flask that I know I will probably never carry, let alone even use. And cords for my sunglasses that I don’t like, and don’t even fit.

Oh and I bought a new down jacket just in case it fitted better into my rucksack than my other one that I bought last year and have never worn. I put neither of them into my bag in the end – just a waste of time and my money. Memo to self – be less wasteful in future 😦

So anyway, on to the travelling. Day one was basically for the group to meet at Heathrow and get to Russia. The flight was Aeroflot to Moscow, and then from Moscow to Mineralne Vody (which translates to ‘Mineral Waters’). We would then meet our group leader, Britain’s only female multiple Everest climber Adele Pennington, in Mineralne Vody the next day. The first flight to Moscow went at 22.15, so it was destined to be a long day and night.

We met at 7pm or so at Heathrow, and we were 11 people in total. Andy and Cormac I had met before at the pre-Elbrus weekend in Snowdonia in June. It was really good to see them again. Then there was Dave, Steve, Dennis and Roxanne, Hui Ling, Jo, and Paul and Katherine. You sort of know when it is going to be a good group, and it was going to be a really good group.

After what seemed to be an interminably long check in, eventually all went smoothly from there, and after a swift glass of wine or two we were on our way. Moscow arrived at 5am in the morning after adding the three hour time difference, and after an almost four hour layover we were on our way to Mineralne Vody, a further two and a half hour flight due south towards the Caucasus mountains, our ultimate destination. 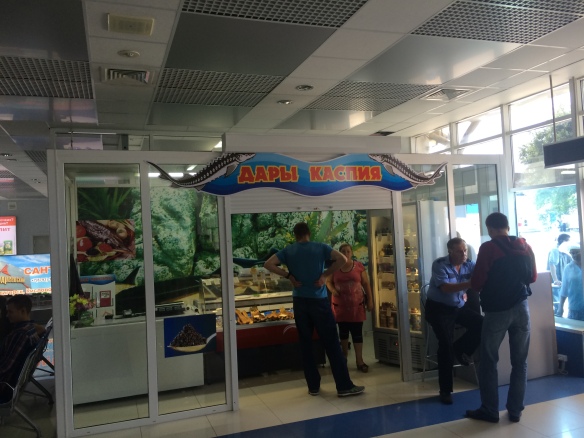 The only shop in Mineralne Vody airport, selling caviar – what else?!

Upon meeting Adele, who was there at the airport to meet us, and Viktor, our local guide, we set off in one small minibus and a taxi. It was sweltering, at a somewhat unexpected 36 degrees C, and air conditioned vehicles are not something I think much seen in these parts of Russia. I had at least arrived in shorts, but it was quite frankly just too hot to be outside whatever you had on.

We checked into the Intourist Hotel in Pyatigorsk, about two hours later, and were just happy to be there, even as hot as it was. What with uncertainties over the Russian/Ukrainian crisis, and a day and night of travelling involving all manner of planes, trains and automobiles, it was great to have all the luggage intact too, particularly as I had spent about £1,000 on my last minute kit shenanigans, including a super warm sleeping bag that would be great for the arctic circle, but probably would boil me alive down here.

The Intourist Hotel, Pyatigorsk – not the prettiest sight in the world, and a case of ‘function over form’ for the most part.

Mine and Paul’s room at the Intourist Hotel, basic, but clean enough, just 🙂

Having got ourselves sorted into our rooms etc., everyone headed out into town to get lunch and buy water and a few snacks for the days ahead. A pizza lunch and (sadly) warm beer over, everyone then headed back to sort out kit etc. for the next day. We would leave anything that we didn’t need for the mountain in the hotel, and pack everything else ready for our departure south to the mountains the next morning. 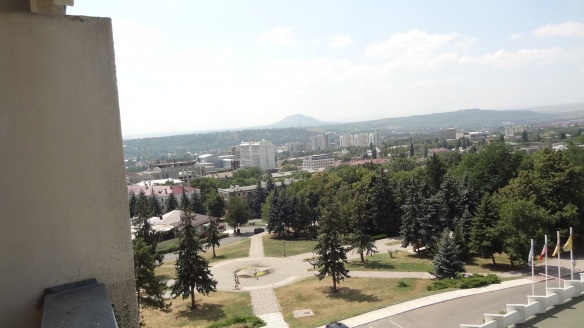 A view over Pyatigorsk from the third floor of our hotel.

Pyatigorsk seemed like quite a nice place, and certainly prettier than I had feared. This being my first trip to Russia, I had expected something more austere, but throughout the trip it was more affluent, more colourful, more friendly, and just generally ‘nicer’ than I expected it to be. On the flip side of that I saw more military checkpoints and machine guns than I had bargained for too, but more of that in a later post.

In the evening Viktor took us to a local restaurant, and we all got to have a few beers and a general unwind before the ‘real’ trip started the next day. 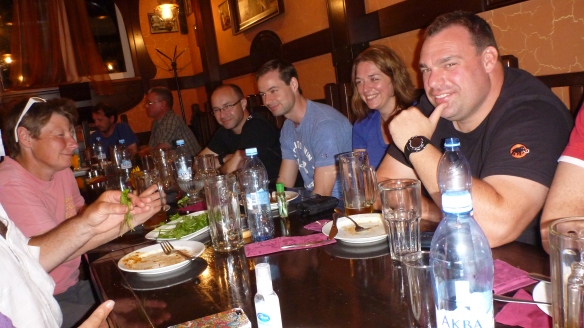 The group chill over beer and way too many herbs for dinner.

On our way back finally to the hotel something quite strange and almost magical happened. We were walking through a park approaching the hotel, when as we got near a large series of water fountains it became clear that there were literally hundreds of people gathered. Then, over loudspeakers unseen, the sound of classical music began, whereupon to coloured lighting in both the trees and the fountains themselves, the waters danced a coordinated song to the music of Strauss! It was mesmeric, and quite beautifully done.

I stood transfixed, and grinning from ear to ear, as a large crowd, young and old, late at night, enjoyed the majesty and simplicity of the spectacle in front of them. This was something that would not occur back home in the UK – it was almost too cultural if you like. I decided that I already loved Russia, and realised that experiences like this, whilst unplanned, were very much part of why I love travelling and going to new places in the first place.

Back finally at the hotel, and it still being about 30 degrees outside, sleep was not terribly easy to come by (air conditioning being as missing in the hotel as it was in the minibus earlier), but eventually it did, as we were all really tired from having not been to bed the night before. It would not by any means be the last loss of night’s sleep to come on this trip, and the adventures ahead of us would start to properly unfold the next day. We were ready – it was time – we were finally here.