So following on from my last post, day 10 would see us pack up early in the morning after a relentless buffeting from the wind in our hut all night long. Our Elbrus North Side attempts were over after two aborted summit attempts (one at 4,800m due to high winds, the other last night where we couldn’t even leave the safety of the hut, again due to high winds).

The hastily made, but now incredibly exciting, plan for the next 24 or so hours was now as follows:

1. We pack everything we have with us and head back down to Base Camp at 2,500m (about a four hour trek).

2. Two trucks had been booked to take us the four further hours out of the Caucasus mountains altogether and back to Pyatigorsk where we would spend the night back at the hotel we stayed on Day One.

3. We would be transported tomorrow morning by bus to a ski station on the South Side of Elbrus (another four hours) called Terskol.

4. We would get a cable car up to about 3,700m tomorrow afternoon whereupon we would rest before making a summit attempt on the South Side at midnight or so, probably with a little help from a snowcat to get us to about 4,500m. We were already acclimatised to this height and had been there only yesterday by our own steam, so this was alright with me. In fact it was a lot better than alright – it was fantastic.

With the wind now finally at manageable levels, we said our goodbyes to High Camp on the North Side for the last time, and headed down the mountain. Most of us had more kit than our rucksacks could manage and so we arranged some porterage for the bits we couldn’t fit in at a cost of €2/kilo. Some brave (or more parsimonious :)) souls like Andy strapped everything they had to the outside of their packs and soldiered on. I was very glad of the assistance I have to say!

Katherine happy to be heading out and down….

The weather improved remarkably within about 30 minutes of getting out of camp, and got warmer and warmer as the air got richer going down the mountain. 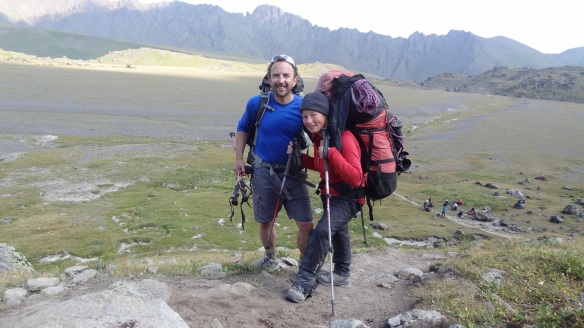 Heading down towards ‘The Airfield’ – Adele with a pack practically bigger than she is!

The trek was easy going and relaxed, which made a nice change after such a hard few days on the glacier struggling against the winds.

Heading through ‘the gorge’ – Base Camp finally in view in the distance.

Finally getting to Base Camp at about 11.30, we changed into T shirts and had a very welcoming lunch and (for a few of us at least) a well deserved beer – bliss! 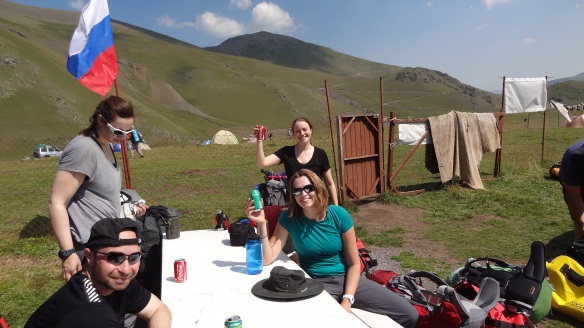 Base Camp warmth and happiness!

It was then back into our trusty little trucks for the long journey back to Pyatigorsk, which went without incident.

On the dirt road out of Base Camp – even Viktor had to hold onto something!

It was almost weird being back in Pyatigorsk. The temperature was in the 30s (centigrade) but the shower was extremely welcome it has to be said after over a week without one.

In the evening we went to a pizza restaurant, and the first thing I noticed was that it was odd to be able to choose your own food. Strange how the mind adapts so quickly to your circumstances where you just put up with (even if you don’t always enjoy!) whatever food is put in front of you up a mountain. It was great though not to have buckwheat and borsht, and tuck into something tasty, washed down with more beer too – fabulous!

Then it was a case of trying to sleep in a temperature of (still) 30 degrees, but I think most folks managed it just fine. I hadn’t slept for the last two nights almost at all, and so could have slept standing up in a blast furnace if I had to.

The next day would determine whether we would be likely to get up Elbrus finally. The logistics alone of us getting into the right position to be able to even attempt the summit meant it was going to be a long and amazing journey in just 24 hours, and on top of the one we had already had, it just added to the fantastic adventure that it already was. This time though it was even more binary, as we had now less than 48 hours before our visas expired and we had to leave the country altogether. In what was now a race against the clock, as well as the elements, we would thus either summit tomorrow night, or would be going home empty handed. The weather forecast didn’t look too bad, but the term “fingers crossed” had never been so apt……