Our second day at Plaza Argentina at 4,200m would see us ascend to almost 5,000m for the first time for our first proper ‘carry’ of the expedition. This would both move equipment ready for us to use even higher up the mountain, and also assist in the acclimatisation process – the tried and trusted adage of ‘climb high sleep low’ which helps your body to adjust to the ever thinning air at altitude. And 5km upwards is already high altitude – I’d only been northwards of this three times in my life, and so this is where it all gets very serious. We would thus basically go up to the next Camp and then return later the same day to where we were.

We were awoken at about 7am by the sound of a helicopter coming into camp, the first of about 4 that morning. They may have been dropping supplies, as opposed to picking up medical emergencies, I never found out.

This got everyone going though, and we began the process of finalising packing for the carry to Camp 1 at 5,000m. It became obvious very quickly that this was going to be the heaviest carry I have ever made. We also had to carry between us all of the cooking equipment, gas, and food for the next ten days. I have no idea how heavy my rucksack was, but it couldn’t have been less than 25kg. With it finally on, if I just rocked from side to side it almost made me fall over. 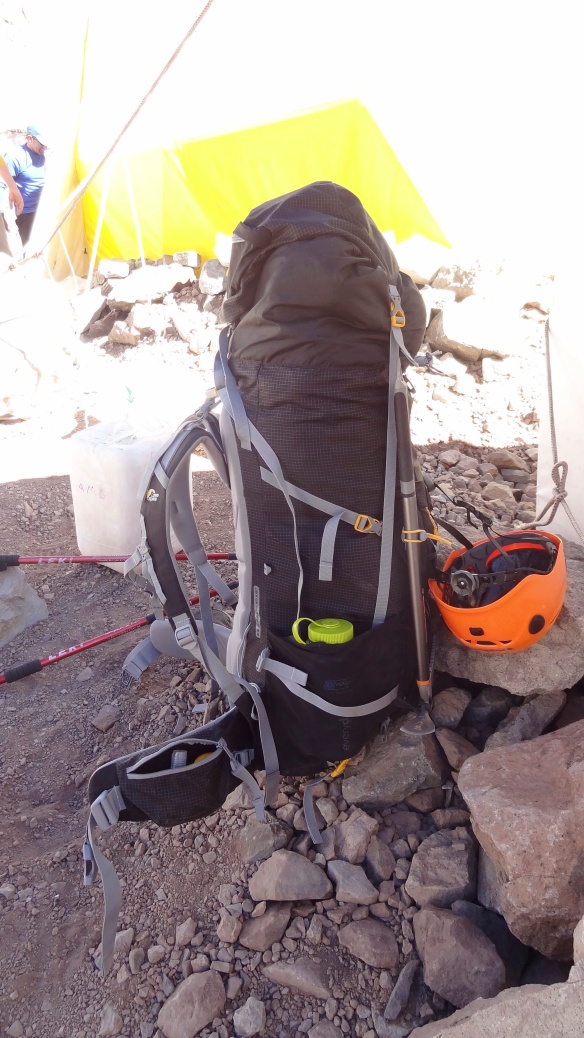 I couldn’t have packed anything more into here if I tried…..

Following a hearty breakfast of porridge, eggs, yoghurt, and toast, we we ready for the first seriously hard day of the expedition, although everyone knew that there would be harder, much harder to come if we were to get that far. 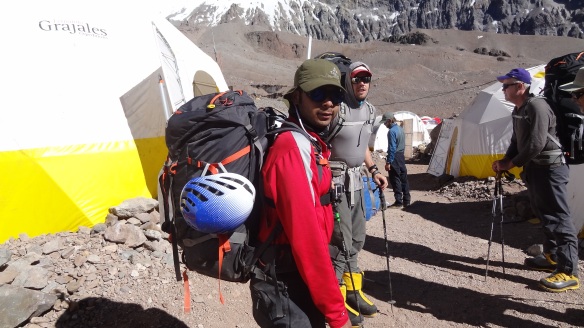 Kuntal, Pete and Fred are ready to go… 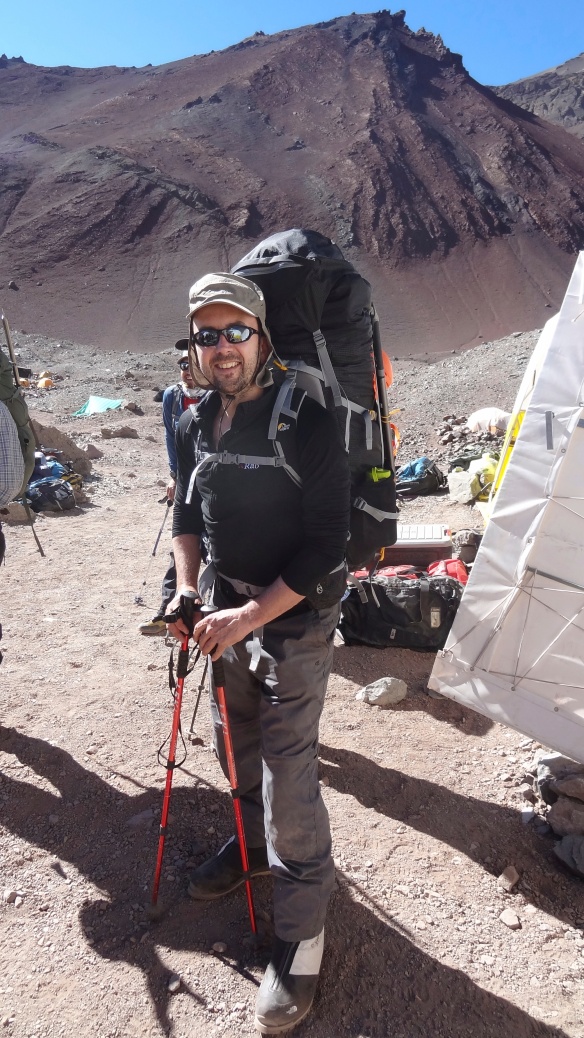 ….and so am I. This is what you call a brave face when you have 25kg on your back.

Setting off was such hard going. I was out of breath within five minutes, and until I could find a rhythm I wondered how far I would get. The day was also hot, much more than expected at this altitude. Thankfully the pace set by Peter was manageable, and once into a tempo I found I could at least keep up, if just.

After a break at about an hour I found I had hotspots in my new boots (never a good time to try them out), so about four pieces of Compeed later and I was good to go again. For the next section we donned helmets as this as a section notorious for rockfall. Thankfully my new helmet is fairly light and didn’t cook my head too much. 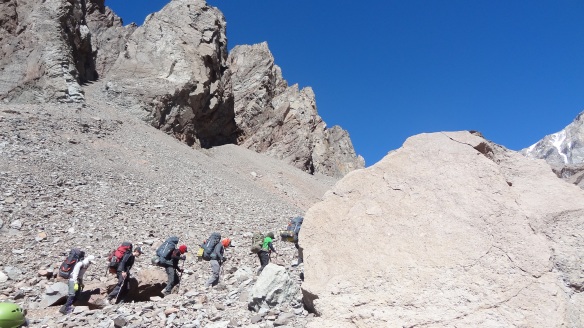 The trail continues, this is hard work, very hard work.

The whole walk up to Camp 1 gains about 800m, but it feels more than that, as there are three very steep sections. The last section in particular, of about 200m ascent, is as hard a stretch of walking as I have ever done, especially with 25kg on my back. Not only was it extremely steep, but there were scree sections which saw you go one step forwards and sometimes two back. They key here is never to panic or try to go too quickly – it will take every breath out of your body, quite literally. Thankfully the sun shone for us throughout and the winds were low, which helped considerably, and I stayed in a base layer all day, other than for breaks when an extra layer was necessary. 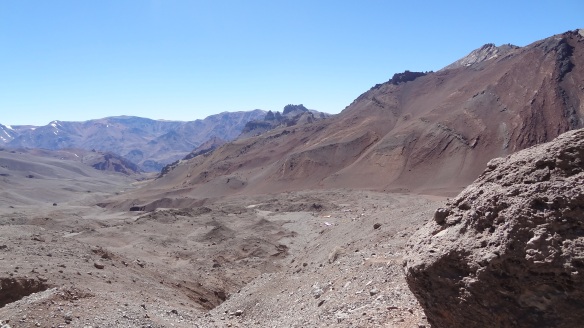 Not yet half way, but Base Camp is already a long way back down there. 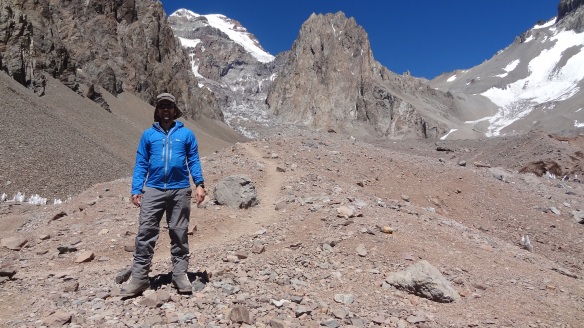 At a break, the top of the mountain is in sight, and Camp 1 (not yet in view) is just over the shoulder of the ridge at the top right. 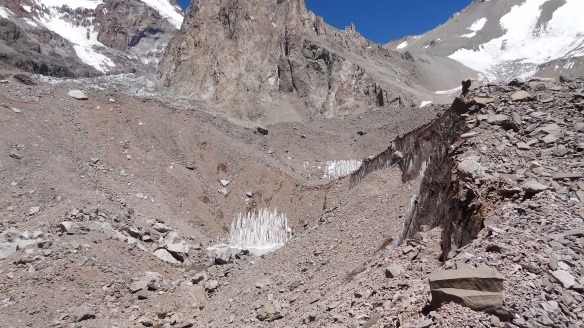 The ice pinnacles (penitentes) come into view as Camp1 gets closer. 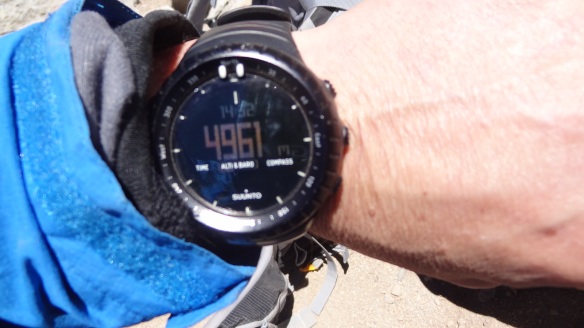 When we finally reached Camp 1 at about 2.40, we unpacked our kit and group gear, and placed it under rocks to stop it blowing away. Camp 1 is a notoriously windy spot, and Peter told us that last year they got stuck there for 6 six days with 120mph winds. I could only hope and pray that that didn’t happen to us. Six of the eight of us made it up at this time, but both John and Kuntal had found the going even tougher than the rest of us, and came in about half an hour later, fairly exhausted it has to be said.

When we were all ready to turn round again we scree-skied down the first section, and really motored down the rest. The journey which had taken 5 and a half hours up took little more than an hour and a half down.

Following a great chicken dinner, our final one at Base Camp, Peter and Johnny had a chat with both Kuntal and John. They advised them that it would be best to hire individual porters for the remainder of the trip as they were unlikely otherwise to keep up a sufficient pace. The mountain was only going to get higher and harder after all, and next day we’d be up there trying to sleep at 5,000m. After some prolonged discussion and thought, both took the view that they had come to do the mountain expedition style and didn’t want to take the option of porters, and so decided that their trip would end at this point.

It must have been a hard and emotional decision for both of them. Kuntal was really disappointed when he came back to the tent. He’d put a heck of a lot of time, effort, money and emotion into this trip (as everyone had), and this was not the way he’d expected it to end. But he’s young, and dedicated, and had been a great team member. He’ll be back I’m sure, older, wiser and ready for the challenge next time round. John had been a brilliant guy since the moment I met him in Mendoza. We’d shared stories of golf and tennis and the like, and he would love to come over to the UK to see either Wimbledon or the British Open one day. I hope if he ever does to be able to see him there, John is simply one of the nicest people you will ever meet.

Tomorrow then we’d move, and the mountain would get tougher, as if it wasn’t already tough enough. The hardest parts were starting to bite, and we all now knew, as if we didn’t already, that this was one bloody hard mountain.