Day two in Kathmandu starts with breakfast at a fairly civilised 8am. I am tired as I had a bit of a fitful sleep due to having the window wide open all night, which in itself was entirely necessary due to the air conditioning in the room seemingly pumping hot air out instead of cold, and the dial not making any difference no matter which way it is set. Outside you can hear dogs, monkeys, endless traffic and all manner of other strange sounds. It is all so different too that it makes you want to listen to it and try to make sense of it all.

After breakfast we meet Ngima, who then does a full briefing with us. We have to get our trekking passes issued, and then he explains the route to us for Everest Base Camp and Island Peak. The journey will differ slightly it seems from the trip notes, but for the better. He gives us a map each which has been highlighted and noted where we will spend each day.

We will spend two days around Namche Bazaar it seems, which is great, as this will be the first night at altitude proper (above 3,300m). Whilst there we will also get to spend time at the Edmund Hillary hospital, which actually makes me really emotional thinking about it for some reason. We will also I think get to spend the 8th night at Everest Base Camp! This is so unexpected (whilst EBC was always part of the route it was due to be a very fleeting visit) it about floors me, and I have to look out of the window as I think I am welling up. We will also spend just two or three nights now (as opposed to what I thought was four) in tents on the glacier at Island Peak, which still seems like a long way away for some reason, probably because it is.

After breakfast we head back into Thamel, to ‘The Summit Brothers’ mountain hire shop. 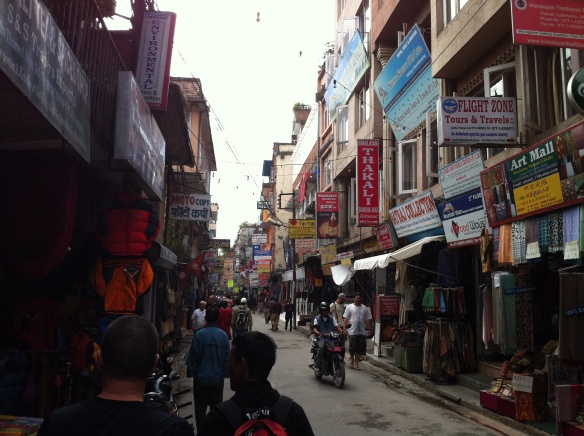 A typical shopping street in Thamel..... 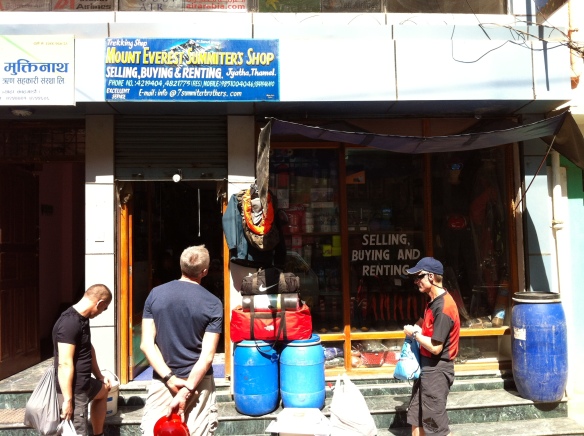 And the 'Summit Brothers' Hire shop.

We are duly decked out (for those of the group who don’t already have them, which is about half) with plastic boots, crampons, ice axes, helmets (mine looks like it is off a building site and it is suggested that I look like Bob the Builder) and the like. We have to pack all of our Island Peak equipment separately as it will be taken today to Everest Base Camp and we will thus not see it again on the trek until the climb itself.

After a leisurely lunch of pizza in Thamel, we go back and pack for the trip proper. Everything has to be sorted into four bags. One for Island Peak with the climbing stuff, one for the trek with all clothes, sleeping bag, toiletries etc, one day bag/rucksack with waterproofs and camelbak and the like, and then anything else is left behind at the hotel so that you have a clean set of clothes to change into when you return from the Himalayas. As I am packing I realise that I have forgotten to pack my Camelbak, and so I head back into Thamel again to buy one. After a bit of haggling I get a rather cheap and nasty looking one, which is probably because it is actually cheap (about 8 quid including an albeit flimsy insulating tube) and nasty, and I hope will last the course.

Duly packed and ready for the off, I get a message from a friend I used to very recently work with, Louise, who is trekking in Nepal with a friend of hers at the same time as me. She asks if I would like a beer and dinner, and that sounds like a perfect way to round off my stay here, and so we meet at 7pm. A thoroughly enjoyable evening is had and we have some great food and a copious supply of Everest beer. I find out during the evening that Lou had altered her trekking plans to come back to Kathmandu so she could see me whilst I am out there, which was very flattering. Thanks Lou if you ever come to read this 🙂 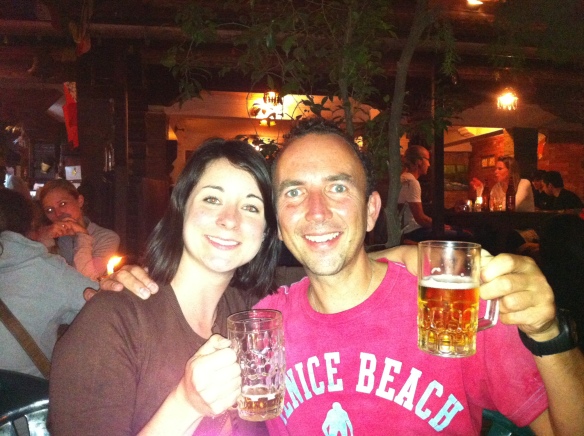 Lou and I at 'Old Orleans' restaurant in Thamel, much recommended if you are down that way.

I get back to the hotel rather later than I should for what will be a 5am start in the morning, but nomatter, it was so good to meet up, and I actually wish afterwards that I had stayed longer.

Tomorrow though is effectively here already. At 5.30am we will head to the airport to fly to Lukla. I have been dreading this flight for some time to the world’s shortest runway, banked at 15 degrees. Then shortly after arriving at Sir Edmund Hillary airport, (which sadly and ironically claimed the lives of his wife and son in a crash landing there) we will start walking right away, towards Everest. I will at last be on the path of giants, the same path that Edmund Hillary himself took in fact. The trip is now on, well and truly.

In just over a week’s time, I will stand directly underneath the tallest natural phenomena on the planet, Mount Everest. And if that doesn’t get you out of bed by 5am in the morning, then nothing ever will. See you in the mountains 🙂