So I woke this morning for the second night in Dingboche at 4,370m or so, and my head was thankfully reasonably clear, despite not the best night’s sleep I have ever had. Nights at this altitude when you listen to your heart beating and you cannot properly get your breath are just not easy, and certainly not condusive to restful sleep. My terrible dreams (like really horrific grisly nightmares) seem to have abated slightly however, which I was having slightly further down the valley.

Yesterday we did an acclimatisation walk up to around 5,100m, which involved my first ever Himalayan peak, called Nangkartshang. It was stunning in every way, if very hard work at this altitiude.

The morning was again totally beautiful, without a cloud in the sky, and barely a trace of wind. We would again today get to an altitude of around 5,000m (16,500ft), with our destination being Lobuche, the final resting place before Everest Base Camp on Saturday. 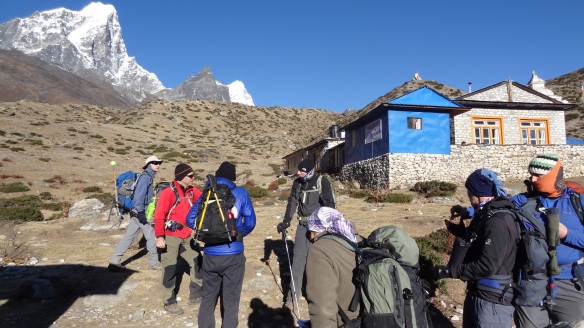 Ready for the off to Lobouche, and a very cold start despite the sunshine.

The walk begins at around 7.20am with a fairly steep uphill section, the start of the same trail that yesterday took us up to Nangkartshang Peak at 5,050m for our acclimatisation walk. It then flattens out into a valley, and is a beautiful walk between the peaks of Cholatse (6,440m), Taboche (6,376m), and Pokalde (5,749m), mountains that we haven’t seen before, but are breathtaking the whole way. 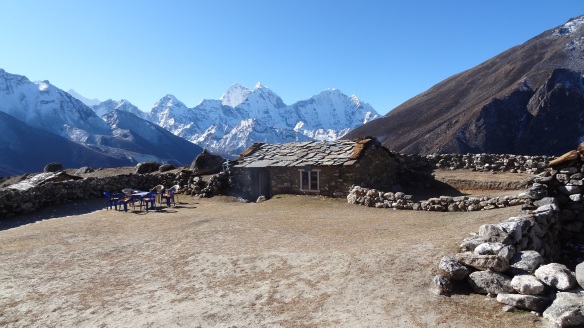 After about an hour and a half the path then descends and reaches the Khumbu river and crosses it at Thokla (4,600m). We stopped here for tea before a brutal uphill section which takes us up a further 300m or so. During this stretch I thought on several occasions that my heart was going to literally burst out of my chest, and that was walking almost as slowly as I possibly could. It made me think (or should I say ‘know’) that I will struggle even more than this when more than one and a half kilometres higher and on a 50 degree ice wall.

I did make it to the top however, alongside my now very regular walking partner Mo. She and I are ‘on a par’ I would say in the struggling stakes, although I should give her the benefit of the doubt as she is feeling terrible with a bad cold and sinus pains. She christens us the ‘tail end Charlies’, which is very apt I have to say.

Reaching the top I had my biggest (in terms of emotions) ‘moment’ to date. At the top of the pass, at 4,840m (15,479ft), there are a large number of memorials. These are to the climbers who didn’t make it back down Everest, including Babu Chiri, a very famous Sherpa who summitted Everest 11 times, but died in 2001, and Scott Fischer, a legendary climber who was one of the eleven who perished on that fateful night in May 1996 (and to anyone who hasn’t read “Into Thin Air”, I would heartily recommend that you do so). 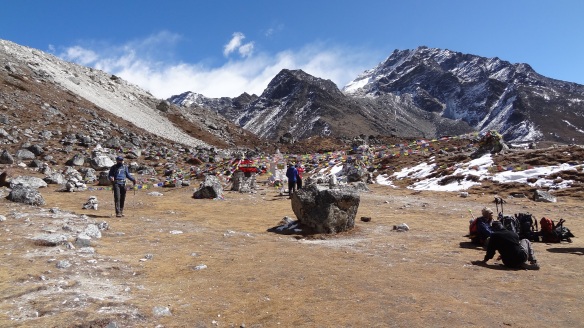 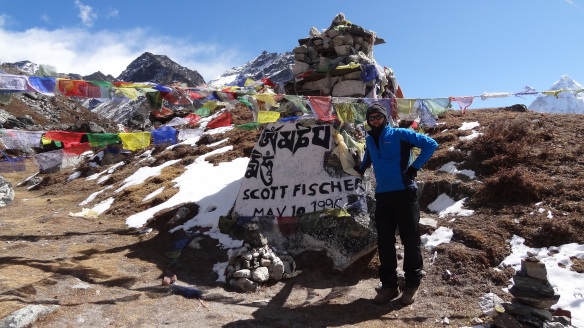 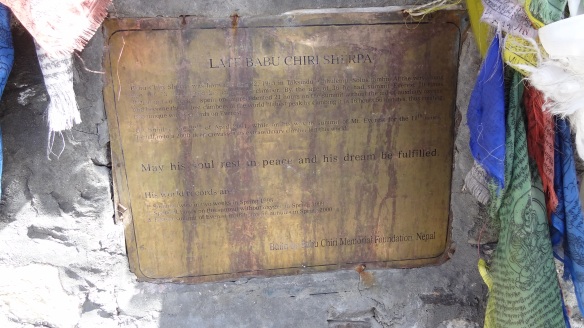 At this point my emotions come out totally, and I have to walk to the other side of the plateau so the others do not see me shed a tear. I realise that here am I, struggling to walk up a path to 15,500 feet, and here I stand, totally unworthy, in what is effectively a graveyard to the greats of mountaineering. In total, 162 people have lost their lives on Everest. At this point in time I want to be at home, with a glass of wine. I stand here, inadequate, but very humbly respectful and in tribute to the people who have succumbed to the mountain.

The views from here are breathtaking too, and composing myself I take a few shots (click to expand these, as you can actually with all the photographs in my blog). 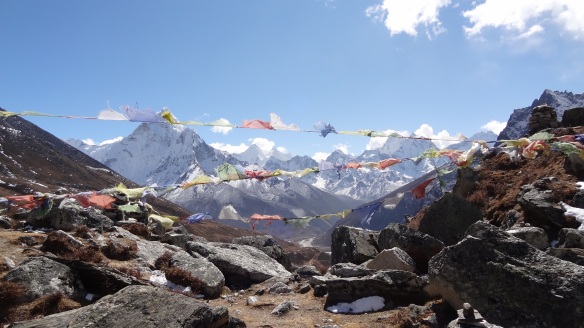 Looking back down from the memorial ground towards Thokla 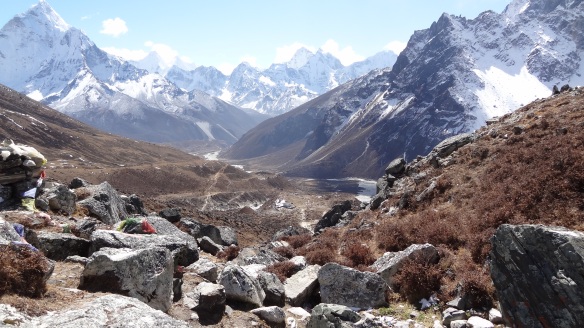 And a wider shot back down the valley again. I think this photograph is going on my wall as a picture somehow.

From hereon upwards the walk changes perspective quite considerably. We are now in the main part of the Khumbu valley itself, in what is principally miles of moraine (debris, rock etc) from the glacier as it originally was. It is again stunning, and we are now in the shadow of even more staggering peaks. In front of us looms Pumori, at 7,165m, and on our right the towering mass that is Nuptse (7,851m). In the distance now also are Lingtren (6,813m) and Changtse (7,583m). We are looking in fact now directly at Tibet (Changste is in Tibet, as in fact is half of Everest) which just makes me have yet another gasping awestruck moment.

We cannot yet see Everest or Lhotse as they are hidden behind Nuptse – they will (hopefully) be tomorrow’s reward, but today’s rewards are more than anyone could wish for in a normal lifetime. Around every corner everything gets simply better and better and better. I probably uttered the word “fuck” (excuse my French here, but if you were here you would too, believe me) in total astonishment about 30 or 40 times this afternoon. 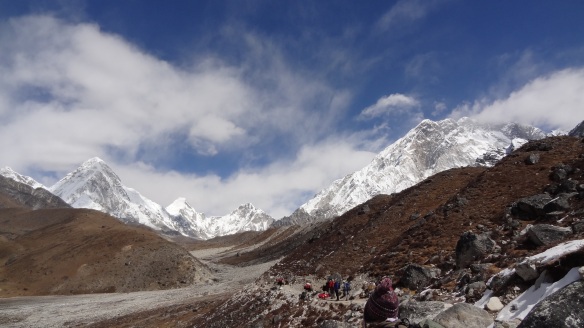 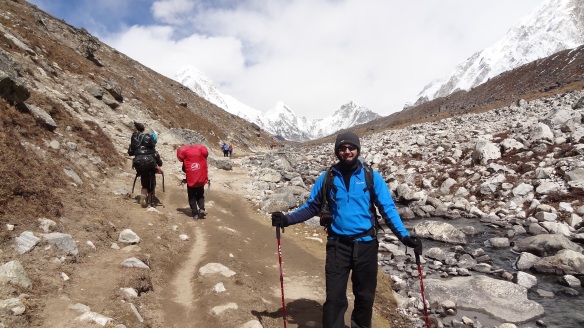 We reach our destination, the Eco Lodge in Lobouche, in the early afternoon. We start early and finish early to get the views and the best of the weather, as in the afternoon the clouds always roll in up the Khumbu valley. I sadly have a crippling headache when we get here, and immediately take two painkillers. I’m just grateful it didn’t really affect me during the walk itself. Thankfully my appetite is ok, and I wolf down a rather enjoyable (and surprisingly good) Spaghetti Carbonara. The lodge here though is not terribly nice, and has outside dirty squat toilets with icy floors where you fear that you are going to slide through the hole. I have to say it didn’t bother me, but just thought I would mention it in case you expected something else! 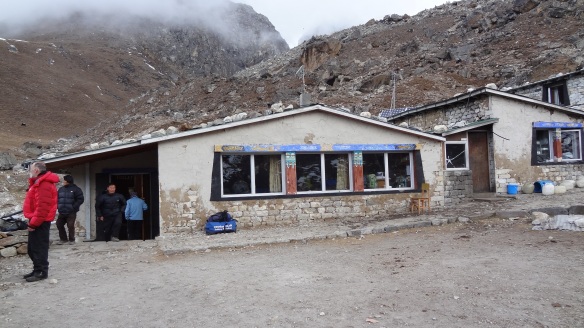 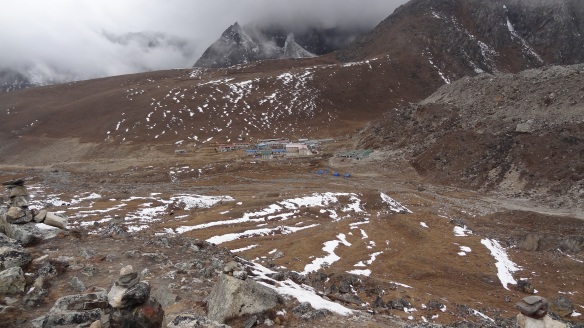 The settlement of Lobouche, a desolate place indeed

After sorting our stuff out in our rooms and a quick half hour’s sleep (I am exhausted), at 3pm we walk up to the glacial moraine to the right of the lodge, so gaining another 75m or so in height to around 5,050m. Sadly the clouds have rolled in by now, but all the same the sight is totally incredible. The swathe cut into the valley by the Khumbu glacier is incredible, the blueness of the now receding glacier itself still shining through in places.

The swathe cut by the Khumbu glacier below us

Better still, there up the valley, clearly visible, is snow on the Khumbu glacier itself, alongside Kala Pattar, the iconic viewpoint for Everest herself, and in the far far distance, Everest base camp. It is not really visible from where I stand, but Tony points to me where it is. We will, I hope, stand there tomorrow morning.We are nearly there! For now, I feel like I have almost made it. I am at 16,700 feet, and I can ‘see’ Everest Base Camp. The Khumbu Icefall, about which I have read tens of books in the last six months, will be there in front of me tomorrow. I feel like I can almost touch it, that I can smell it, feel it. 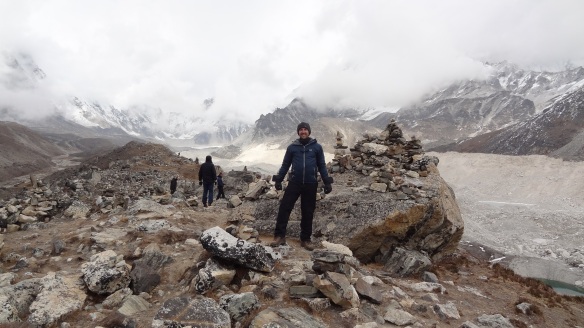 Looking up towards the head of the Khumbu Valley, and the Khumbu Icefall itself.

Back at the lodge, and after dinner, we are informed that tomorrow morning we will get up at 5am for our trip to Everest Base Camp. It will be a very long day, the longest day so far in fact, but this is the reason I am here. I so want to be able to be there. I know it will be an incredibly emotional day whichever way it goes.

The feelings I have here right now stagger me, I can’t even describe them to you, but if you ever hanker to go into the Everest region, all I can say is do it, experience what I did this day, and you will get the biggest buzz of your life.

From everything that I have now seen, and knowing that tomorrow is Everest Base Camp, I know full well that if this were a world of superlatives, then tomorrow would be the day when the world simply came to an end.