Day four was the real first day if you like. The day when we would finally start moving up the mountain.

We woke up in the Hotel Ayelena in Los Penitentes and assembled for an 8am breakfast. This would be our last day with a roof over our heads until we returned to Mendoza, so it was nice to have a final shower and the like before waving goodbye to creature comforts for a while. It was also Christmas Eve, although it certainly didn’t feel like it, as it was already hot by 9am, and most people donned shorts for the day ahead.

The gang ready and assembled – time to march!

We’d finalise our readiness for the day by leaving anything that we didn’t need for the mountain at a locker in the hotel, and then got our rucksacks ready for the off. All of our high mountain gear was going by mule for the first three days of the trip, and so we didn’t have to carry too much on our backs.

By the time we set out (about 10.50) it was sweltering, and I was grateful for having bought a hat with a neck flap to keep the sun off the backs of my head and neck. The trail head started at about 2,400m, and after a quick group photograph, we were off, this was it! The going was fairly flat for the main part, as this was the trek in to the mountain itself, a journey of about 30 miles over three days. 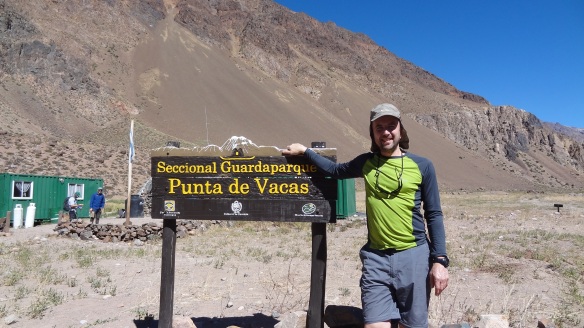 At the trailhead on the Guanacos route to Aconcagua.

We walked almost entirely along the edge of a river, which consisted of glacial meltwater from Aconcagua itself. The valley was sheltered from the wind, which made it hotter still, and after a while I felt the backs of my hands burning. Clearly factor 30 sun tan lotion doesn’t cut it round these parts, and so I nabbed a bit from Kuntal who had bought some factor 80, although he said he didn’t need it, has never used it, and therefore had to ask me how to put it on 🙂

The first break, much needed, in the Guanacos Valley.

We stopped for a drinks break after about an hour, and the valley was starting to open up by now.

Further up the valley we begin to climb a bit as it opens up, the temperature still very hot.

We then trekked on looking for our mule train, which eventually overtook us about half an hour from camp.

We spot the mule train coming up the valley behind us, always best to let them pass 🙂

We reached camp at about 4, after about 10 miles, and then had fun putting tents up. There is no way on the rock hard ground that you can bang tent pegs in, and so you need to find the largest rocks that you can to secure the tent against strong winds.

We finally reach camp just after the mules do.

Tents can take some careful rigging when the ground is so dry….

….and even if you think conditions are good, as much shelter from the wind as you can get is crucial.

After discussions about AMS from Johnny and Peter it was straight into dinner. A bunch of the muleteers had cooked up an absolute feast over an open fire, and so we dined in fine style on steak and salad. Two bottles of Malbec mysteriously appeared, and it would have been rude (and way beyond my willpower) to say no, so I didn’t. 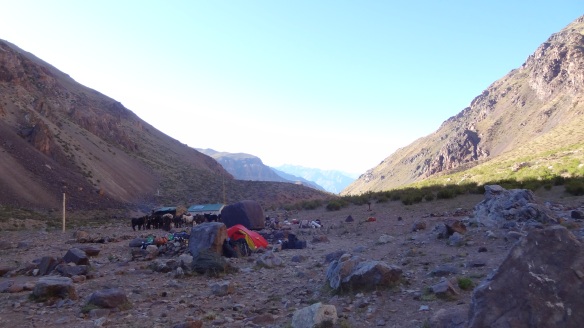 The sun goes down over the Guanacos Valley, Christmas Eve – even the mules are still.

First dinner on the mountain – the temperature has dropped dramatically by now.

The temperature had dropped from probably 30 degrees to 0 degrees by the evening was done. Retiring into our two man tents it was strange to think that it would soon be Christmas Day. I thought of home and the presents I’d bought (of which more tomorrow), and thought how strange tomorrow would be.

As the night drew on and I fell into sleep, I was woken up at some point by the muleteers, who were clearly celebrating Christmas itself. The cries appeared to be “yeehaas” and the like, probably fuelled by whatever muleteers carry in their saddlebags during the day – they were clearly very happy. I was happy too – happy to be in the Andes, on my way finally to the mountain which I had not yet even seen, but which I knew lay close at hand and presented the challenge of a lifetime for me. Roll on Christmas Day, when I may finally see it at long last!