Waking up under canvas for the first time this trip was somewhat strange for a host of reasons. For one it was unexpectedly cold – having been baking under a 30 C sun for all of the previous day it was clearly hat and gloves weather outside. Secondly it was almost surprising to be finally moving – this was after all six days after I’d left England, and this was only day two of the trek. Thirdly it was Christmas Day, and this was the first time in my life I could say that on Christmas morning I’d be waking up next to a bloke who I’d only just met a few days before too! Such is life on a mountain though 🙂

I hadn’t slept as well as I would have liked, as I could certainly feel the altitude (even though it was only about 9,500 feet), and also the aforementioned tentmate did snore a bit more than I would have liked, but again such is life on a mountain!

Today we’d trek about 9 miles further up the Guanacos valley. There wouldn’t be too much ascent, only about 400m or so, and this would be the last time we’d be at a ‘sensible’ altitude of 3,000m or so. Tomorrow Base Camp (Plaza Argentina as it is known) would take us above 4,000m for the first time.

It is amazing how quickly the temperature changes once the sun comes up. Within about 10 minutes of the above picture being taken the sun had warmed things up to the point that I was already in shorts. 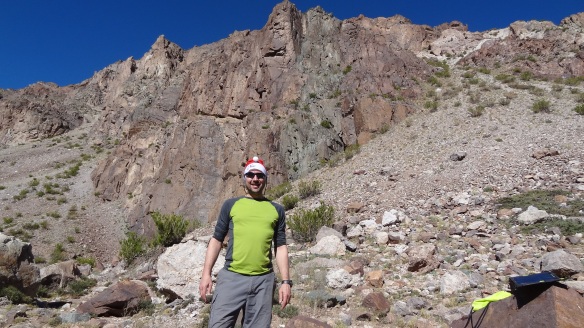 Breakfast outside was great, coffee, granola cereal and then bacon and eggs. By the time tents and the like were unpacked it was about 10am, and we set off very soon afterwards. I took my first Diamox of the trip here and vowed to stay on it from hereon in – am not sure if it is an effective antidote against snoring but it might help in other areas!

The trek on up the dry and dusty Guanacos Valley continues…. 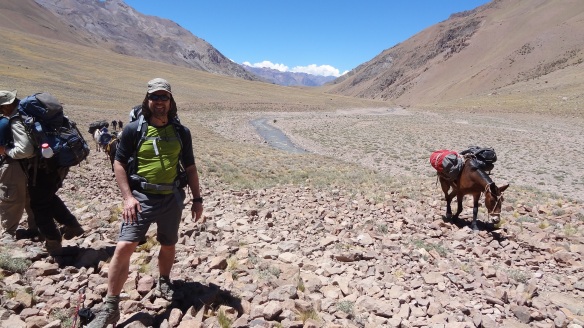 Still really hot as the valley opens up – even the mules are taking it easy..

The mules overtake us of course and we end up about half an hour behind them into camp.

We spot some Guanacos near to camp – these were the only ones we saw all trip.

By the time we got a few hundred yards from camp, there was an opening in the valley to our left, and a view (our first) of Aconcagua herself. You could immediately see why she is called The Stone Sentinel – apart from how massive the mountain is, it looked dark and broody, a very inhospitable and cold place. 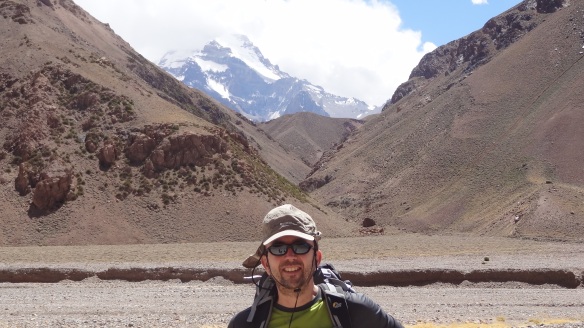 The first sighting of Aconcagua – a great Christmas present!

We pitched tents and got some downtime before dinner, the evening was calm but again got very cold very quickly, and it would be a very cold night with a hard frost.

Camp 2 – the stone hut was where the muleteers slept and cooked our amazing dinner in a fire pit outside.

Dinner was fabulous. The best chicken I think I have ever tasted – done over hot coals and crispy and wonderful. I don’t think I could have wanted for more. It was the perfect Christmas dinner in fact. It was also washed down with (of course) two bottles of Malbec! I hadn’t expected wine to still make an appearance this far up the valley, although (thankfully I suppose) this would be the last time – we were about to ascend a fair bit the next day, and it was time to get serious now.

Unfortunately the day nearly ended very badly. At the end of dinner we were told that we had to get to breakfast for 5.45 for a 6am start, so once the packing up was done, I went up the hill to the toilet (the green enclosure in the above photo). When I was done, I found that I couldn’t open the door and it had locked shut from the outside. There wasn’t so much as a handle let alone a key and so I was stuck. The only way out might have been down “Slumdog Millionaire” style, and that even went through my mind for a fleeting moment.

I actually had to shout for help in the end, and thankfully after a few valiant efforts from Pete and Gary to break the door down, one of the muleteers appeared with something to unlock it. I can only say that I have never been so relieved in my life. I was there for the longest 20 minutes of my life!

Back to the tent and I reflected on the fact that this was Christmas Day. Those who know me know that I have both been inspired and moved (and that’s a massive understatement I can tell you) for some long time now by a group of people who have given so much back to society, following a most tragic event in their lives. They are known as Pete’s Dragons, and although I won’t go into the whole story here, I would urge you to read about them, and if you can, to please find a way to make a donation to their principal two causes, which are Samaritans and the Cornwall Search and Rescue Team:  http://www.petesdragons.org.uk/Core/PetesDragons/Pages/Default.aspx

The point of the above illustration here is that for Christmas, a long way away back in the UK, I’d left letters and gifts of Pete’s Dragons Bears (amongst a few other things) for my son and daughter. They’re 23 and 21 now, but no-one (most certainly including me) is too old for a bear. My own bear came with me on this trip and reminded me of the gift of giving, and it made my Christmas Day a happy one for me.

My “Pete’s Dragons’ Bear, back the day before in the Los Penitentes Hotel.

To Dan and Becca on this Christmas Day, I love you very much indeed, and am so proud of you both.

To everyone else, most importantly to the folks at Pete’s Dragons, I wish you a wonderful and very happy Christmas 2014.