So yesterday I got to climb a volcano, and today I got to ride a camel. The volcano was fun, the camel wasn’t. Smelly, hairy and very big, I would describe it as. The camel, strangely enough was on another volcano, this one a big one, after yesterday’s little one, if you’re still with me. Oh and there were like hundreds of them – camels that is!

Today’s volcano was an organized trip. Yes a coach trip, full of old people, of which there are copious quantities around here. I’m not sure that some of them knew where they were going. Maybe they thought the bus was taking them to the bingo or something. Maybe not, they wouldn’t have paid a king’s ransom (£50 I ask you) to go on it.

I have to say though it was great. And it involved all sorts of other places than just the volcano. The tour guide was very ‘educational’ too, so I learned lots of good stuff. One of the most amazing things was about the viniculture (and agriculture generally) on the island, which thrives due to the agroscopic way in which things are planted. Volcanic ash is apparently seven times more water retaining than any soil or clay. I like that! The vines for example (of which there are thousands, planted individually) attempt for the roots to reach down to where the earth was before it was covered in lava (or if they don’t then the above agroscopy takes effect), and the little pits that they are planted in let the morning dew run down to where it needs to get.  It basically never rains on Lanzarote, and they never need to water the vines due to this method – this is true ethical/ecological farming right here: 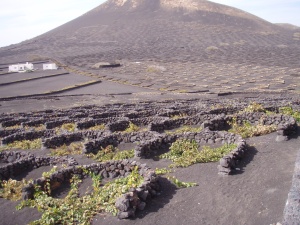 the vines grow in sort of mini-craters

The volcanos themselves were fantastic. They basically destroyed about a third of the island in the 18th and 19th century, and are still, as I understand it, officially ‘active’ even if there hasn’t been an eruption since then. The eruptions were the second biggest anywhere on earth in the last 500 years apparently. The areas are called locally the ‘Badlands’ – nothing can grow other than lichens until they have prepared the magma, and this takes apparently about 500 years or more.

I don’t know how many volcanos  there are (should have been paying more attention!), but I’d guess at 100 or so. The landscape is incredible – over a quarter of the whole island, over 200 sq. km, basically looks like this, taken from the seat of my camel: 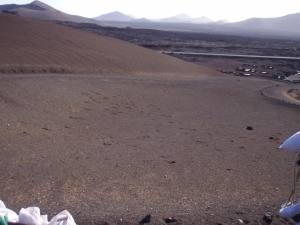 So I also got to learn some of the stuff and properties of volcanoes. They apparently are quite violent affairs:). And apparently one of them is going to burst out of the Atlantic Ocean one day and cause the biggest tsunami ever which will destroy the eastern seaboard of the USA, amongst other things. Sobering stuff – had me headed to the bar right away.

Oh and speaking of camels, here are a couple of pictures of them from the camel journey up one of the volcanoes.

Firstly, here is what I think is technically called a bunch of camels: 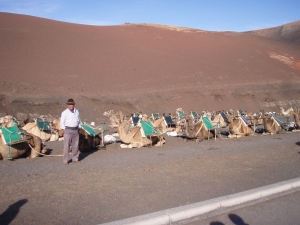 Anyone seen my camel?

Oh and I learned after that they are not camels at all, but dromedaries, but hey who’s counting humps? 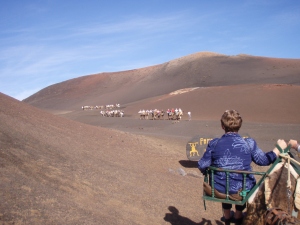 On the way up to Timanfeya volcano

At the top we were served up with various demonstrations of earth, fire, water and air. All were fantastic. The temperature of the rock about 12 inches under the surface is around 80 degrees C, too hot to touch – we tried it. About six feet under the surface the temperature reaches 250 C, enough to set fire to a dried bush, spontaneously as it were: 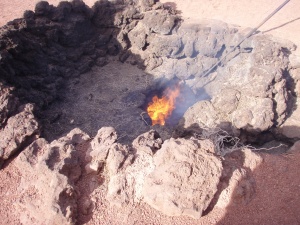 Anyone remember the Life of Brian scene?

Then there was water, and geysers and stuff. They even cook all of the food for the restaurant over a big hole they have dug and so the earth cooks it for them.

On the way back from the volcano tour the coach stopped at two other great places. One, ‘El Golfo’ is an example of a subterranean volcano, which had basically sprung up at the edge of the sea: 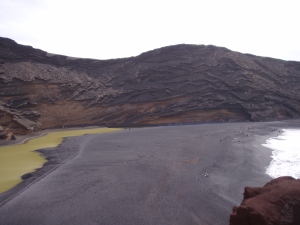 The other place was where a whole field of lava had ended up streaming down into the sea, and had actually increased the size of the island by about 20%. Difficult to see from the photo, but basically everything that you see here for about three miles (apart from me) is magma, in what was a colossal (5 cubic km of lava flow apparently) displacement of whatever was there before (about 20 villages were destroyed): 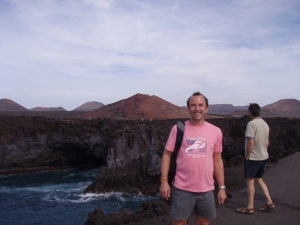 I am at least not quite as pale as the guy behind me.....

So anyway, that was part of my day, and all that I am going to post for now, as I have the need to go out on the town, it after all being Friday night, and me being on my holidays.