I had no idea that you could go Scuba diving on Lanzarote. Did you? Having been to The Maldives a couple of times and snorkelled, I have always fancied diving, but just never done it for a host of reasons – fear and cost being just two!

So it was the second last day of my holiday and I am lying with my book (“A Thousand Spendid Suns” by Khaled Hosseini – outstanding by the way) by the pool, and just contemplating life’s rich tapestries, as it were. Now often during the day you would hear some of the ‘animations’ team walking round the hotel pool trying to drum up some people for activities. You would therefore hear “boules in 10 minutes!”, or “Sangria demonstration in 10 minutes!”, or even “putting competition in 10 minutes!”, whereby you would then see some of the residents trundle off for sundry events. I had switched off to all of these cries, as nothing sounded terribly entertaining to me, when all of a sudden I hear “Scuba diving in 10 minutes!”. I sort of did a double take and cannot think that I have heard correctly, when I look up and see a girl wearing a “Dive Centre Lanzarote” shirt, and think that maybe this is real after all.

So I approach her with a strange expression on my face and ask her if she was serious. As she was holding an oxygen cylinder, and sundry other diving equipment she looked at me back with a “do I look like I’m serious?” expression, and so I guessed that she was. So to cut a long story short (why do I always do or say that?), within ten minutes I am in the hotel pool with full diving gear on, and trying desperately to breathe properly through the mask. It is harder than it looks. Breathing itself is OK, but what I didn’t realise is that you have to totally empty your lungs in order to descend, and that is a leap of faith. It is so unnatural, as you think you want to fill your lungs with all the stuff that the tank gives you, so as not to, well, die, but that does not get you anywhere I can assure you. You just float at the surface like a piece of cork, it is strange for sure.

After about 20 minutes or so of very patient teaching by the instructor (I would have given up on me, I really wasn’t getting it at all), I eventually manage it, I get going down, empty my lungs (I mean you have to breathe out for at least a count of eight, and that goes against everything that you feel like doing when you are underwater – you either want to hold your breath or breathe in), and I am at the bottom of the pool. Wow! When the penny drops it is fantastic – you just need to be really calm. Like caaaaaalllllllllmmmmmmmmmmmmmmmm, with capital letters and things.

So having ‘got it’, Elsa (she’s the instructor) asks if would like to dive in the Atlantic the next day. I look at her like she has just asked me if I want sexual favours or something (she’s very nice too:)) – and I say “yes”. The word “yes” comes out of my mouth like “that is the most stupid question I have ever been asked, of course I want to!”. And so the next day I am sat with three other virgin divers, enlisted from other hotel pools like me, and we are being given diving instruction by Bart, a Dutch guy who will be our diving buddy on the south coast of the island.

Here is a picture of us in the room beforehand having got kitted up and after our classroom training.

Do I look scared? I should do, I was!

The girl next to me has a very small head, don’t you think?

We had been taught in fairly scary fashion all about equalisation (that’s your ears and sinus passages etc), and also the lungs, and not having them overinflate when you ascend, and how bars of pressure work etc. Then we had the stuff about what hand signals we needed. The instruction was very good indeed. 45 minutes later we were kitted up and ready for the ocean as seen above.

To start with, the same thing affected me as the day before. I have a 10kg lead belt round my waist, and rocks stuffed into the pack on my back, and the cylinder must weigh a bunch (and so do I), but still I cannot sink. Bart has to get a bit in my face, and show me again how to not breathe in, at all, and in fact to only breathe out, for as long as I can. But this is the Atlantic Ocean, and a bit scarier than a four foot deep swimming pool! I mean it is deep, and big, and there are things down there!!

We spend probably 45 minutes altogether under water, never surfacing during that time at all. That feels weird, but once I am breathing properly, I never have to think about it again. It is a fantastic feeling, believe me. Fantastic!

The fish are a lot more plentiful than I expect also. There are lots of bream, fairly colourful, and lots of urchins and anemones and smaller fish, but pretty too. I am amazed. The guys from the diving school are right by you at all times, and they take plenty of pictures too, which are of course available for a fee on disc afterwards. Sold! Sadly I am having problems getting some of the photos loaded from the disc at present, but here is one of them below – more to follow when I get the rest up and ready. 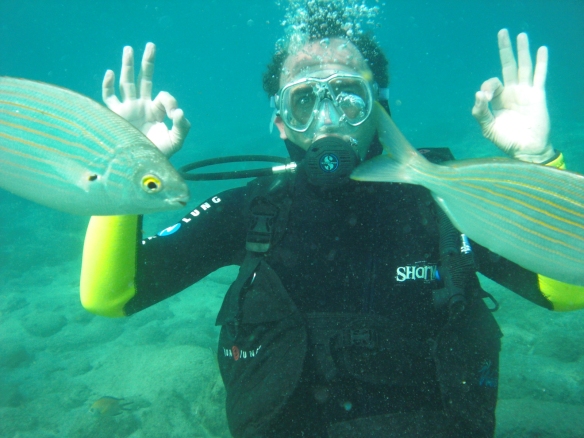 Me and some bream, I think

We don’t go too deep, apparently it was about 7 or 8 metres, but it is enough.

I resolve to more diving when I get the chance – maybe it’ll have to wait a while, but this for sure is a whole new world.