In my last post I mentioned that I was looking to try to get a few more trips booked into my calendar, and as I’ve done just that, I thought I should say so right here, so here I am :).

In May I have the Welsh Three Peaks already arranged. This consists of Pen Y Fan, Cadair Idris, and Snowdon – the former two being done on the Saturday, and Snowdon on the Sunday morning, bright and early, or 5.30am for those of you like me will not be very bright by that time of the morning. I haven’t actually been up Pen Y Fan or Cadair Idris before, so it will be nice to tick off two of Wales’ most iconic climbs, even if neither of them are exactly giant peaks. The whole challenge does however involve some 19,000 feet of ascent and descent, and about 20 miles of distance covered, so it should be a really good challenge.

But the news now, is that I have booked THREE more very exciting adventures, all firsts in their own right…..

First in June, I will be doing the Three Peaks (not to be confused with the Welsh Three Peaks). The Three Peaks involves the highest mountains in each of Scotland, England and Wales, done traditionally in that order, being Ben Nevis, Scafell Plike, and Snowdon. There is this time over 20,000 feet of ascent and descent, and 27 miles of distance to cover, and all within 24 hours. Add to this somewhat exhausting schedule the fact that there is about 600 miles of distance to drive between the mountains (about 13 hours on the road, these are not motorways in the main), and you have a brutal schedule ahead of you. Oh and just to add to all that, you need to do Scafell Pike in the dark :O. Should be a fantastic adventure, of which I will tell more as the time draws near….

Then comes even more excitement in July, with, wait for it, Mont Blanc! Mont Blanc is the highest mountain in western Europe, at 15,781 feet, and is a brute.

Here is just one of the ridges that I get to face:

The Bosses ridge on Mont Blanc.

I’ve never been up Mont Blanc, and never had the chance to even try it, so this is massive for me. It is not to be taken lightly at all, and has a high fatality rate. In fact around 100 people a year sadly lose their lives trying each year. Alan Arnette has a great FAQ on Mont Blanc which I will post below:

There is so much more to say here, but again I will leave that for another time, as it deserves a good few posts of its own. I’m more excited about this than I am Elbrus actually, as it is just one of the most talked about mountains in the world. One of the amazing things about Mont Blanc is that is has a massive prominence from the surrounding valleys – something like 4,000m in fact. To put that into perspective, Mount Everest has a prominence of 3,500m from Base Camp! I have also seen it many times, from many angles, but the main angle I wish to see it from is potentially there in July………:)

So whilst I had a busy week in booking up these two lovely trips, I thought to myself – why stop there? I therefore contacted International Mountain Guides and booked up for Aconcagua! Now as you may know I have had Aconcagua booked for each of the last two years, but had to cancel it on both occasions. So without tempting fate, I am hoping for third time lucky :). I was originally going to wait to see if I made it up Elbrus (booked for August) before attempting Aconcagua, but then I decided that if I can’t make it up Elbrus then I shouldn’t be doing this whole thing, plus I really need something to aim for at the end of the year.

This is my year of the mountains – the one to really test myself and see if I am up for maybe 6 of the Seven Summits…….if I do what I have just booked for then that’ll be three out of the way by the end of the year, or almost – Aconcagua will start in December and end in January. More, much more, on that to follow too. Nearly 7,000m more, in fact……..better get training, and hard.

Aconcagua – so far away still……but getting nearer.

I thought it (well beyond) time that I updated my blog, so here goes:

The year so far for me didn’t get off to a good start. In fact it was awful. In January, four days before my 50th birthday, my Dad passed away. He had been ill, as I think I’d said in a previous post, for some 6 months or so, with cancer. He (only at the end, at least) was in pain, and so I should to some extent be grateful that he is now in a better place, or something like that. But that doesn’t help at all really. Fact is that I’ve watched both of my parents die of cancer now, and it took them both from (far far better) places of apparently otherwise fitness and good health, to being dead in a matter of months both times. I therefore hate cancer, and in this case, hate is by no means a strong enough word. I shall dwell no more on this, and put it away now :(.

I haven’t had the appetite for cycling much so far this year, and let’s face it, the weather has been woeful. I think we’ve had three weekends where winds topped 50mph, and also the wettest start to the year since records began. For this admittedly fair weather rider, and coupled with all else that has been going on, that was too much of an excuse for the bike to stay locked in the garage. Oh and I did also suffer a broken toe, but I shan’t dwell on that one either – it’s healing now!

I have been out in fact, only on four occasions altogether. Once on a brief ride in January, twice (although only about 35 miles each) on a short trip to Northern California, where the riding was fabulous, and then last weekend, when I did my first sportive of the year. The sportive was the aptly named “No Excuses” around Huntingdon, so called because as long as you turn up, they refund your £35 entry fee, and if you don’t, they give the money to a worthy charity, in this case prostate cancer. They apparently raised £22,000 for the charity, which means a whopping 630 people didn’t show up having entered. The stats are copied below in case anyone wants to take a look, but suffice to say I was absolutely knackered by about two thirds of the way through. Over 80 miles had me cramping and not really having fun, but I was very glad to be out there, cold as it was.

I have cycled only 200 miles this year though, and it is scarily almost a quarter of the way through. I must get out more now….

The weekend that is now just ending (9th March as I write) has seen me decide to get my walking legs back, having done basically none of that either. I did join a gym a few weeks ago, but the attractiveness of a stair climbing machine has and probably always will be lost on me I’m afraid. So blessed with some rather fine sunshine at last, I went and put some good old miles in, with a smallish (10lb or so) pack on my back for good measure. Yesterday (Saturday) I got in about 12 pretty flat miles around Milton Keynes, and today I headed out to Woburn, just about 6 or 7 miles away.

Blessed with totally beautiful weather (and frankly if we get days like today in the summer I won’t be complaining) I put in just over 14 miles, making 26.2 for the weekend. Although that is not exactly a huge number, I cannot actually remember the last time I walked 26 miles in two days, so that has to be a good thing. I also saw so many deer it made my head spin – witness this shot below for example: 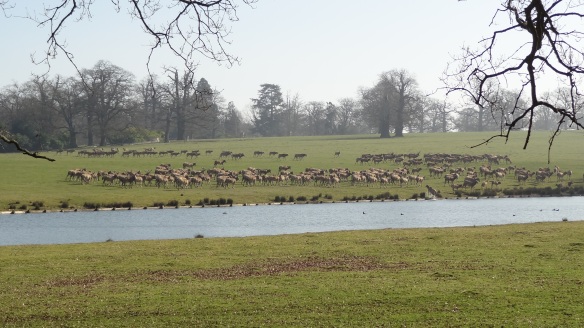 The deer at Woburn Abbey

Here are some a little closer with part of Woburn Abbey in the background:

Deer in front of the Abbey

So with me planning to be back to full fitness as soon as I can, I am now starting to look forward with relish to the rest of the year. I have planned the Welsh Three Peaks in May http://www.thethreepeakschallenge.co.uk/welsh-three-peaks-challenge/, am trying to get a full Three Peaks http://en.wikipedia.org/wiki/National_Three_Peaks_Challenge trip in June , and am also looking to try to get a Mont Blanch trip in in July, prior to Elbrus in August. I have also contacted International Mountain Guides to see if they can’t get me that Aconcagua trip back on for the end of the year. Third time lucky, all being well……….