Today is New Year’s Eve, and just like Christmas Day, it would be spent in a tent on a very windy mountain. For those of you who wonder, yes I do question at times why I do this. I could for example be sat somewhere warm and pub-like with friends, music playing, a nice bottle or two of wine, and some end of year festivities. Instead it is -10 outside, snowing, there is a 60mph or so wind blowing, and I am holding onto a tent in case it blows 8,000 feet down below me down the mountainside. Oh, and I have a headache, not through any festive reasons, but because I have mild altitude sickness. Happy New Year!

So anyway, onto today’s events. We didn’t need to look out of the tent to know that the wind was still howling and it was snowing hard. I did however have a look at the sky towards the summit, which told me that we weren’t going out anywhere soon this morning. It was black and foreboding, with sheets of icy snow cascading down the very slopes we needed to be walking up. Peter our guide came around with breakfast to the tent (a nice touch always) and told us that as long as there were gaps in the clouds we’d still do our carry starting at 11am. 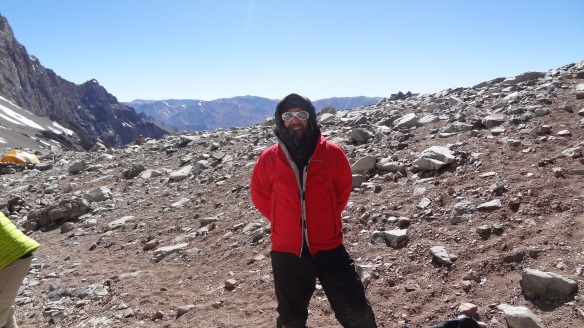 All wrapped up and ready to go – even though the sun had come out this was one cold day!

We had about 1,800 feet only of ascent to do, but in these conditions (and bearing in mind we were starting out at 16,400 feet) it was going to be a tough day. This was particularly the case as some of the ascent was up a scree slope, and we’d be carrying about 20kg or so on our backs.

Setting out with three layers on my legs and four on top (including Goretex shell) the going was hard from the start, but well paced so as to keep us moving. By our first rest break we got a fantastic view of part of Aconcagua’s summit (it isn’t visible at all from Camp 1) and the severity of the mountain really hit us all. We were still two whole vertical kilometres from its upper reaches, and it looks nothing at all up close like it does on any picture I have ever seen of it. 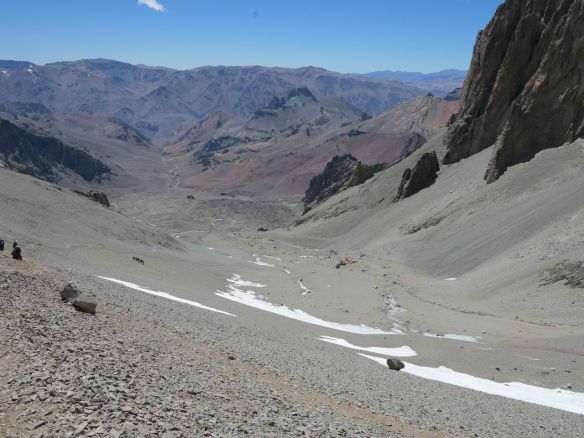 Looking back down to Camp1 from about half way to Camp 2. 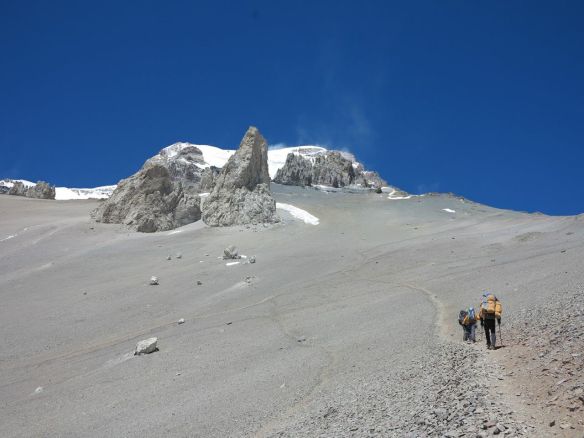 And looking up towards Camp 2 – the top of the mountain is still 6,000 feet away! 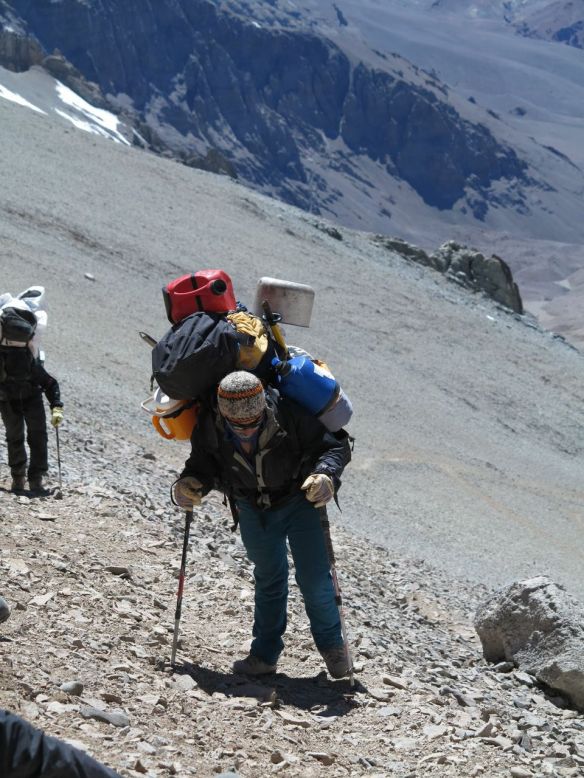 A porter passes us on the way up – we didn’t have them of course, and I didn’t envy them at all!

I felt fairly thirsty on the way up, never a good sign, but otherwise physically fine. We reached the Col between Camp 1 and 2 at about 1.30, and from here there was a big traverse to take us round the north side of the mountain. We got a great close up view of the Polish Glacier, which is incredibly steep, at 70 degrees in places. It apparently hasn’t been climbed now by anyone for four years. 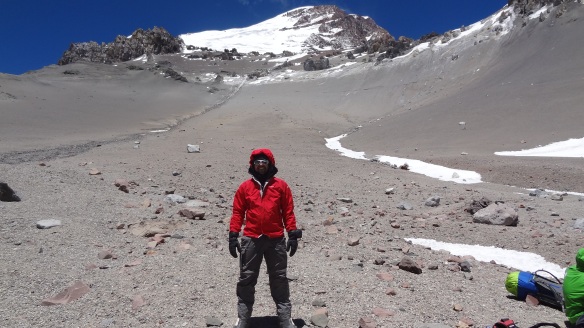 Looking towards the summit and the Polish Glacier at around 5,500m. The photograph  really doesn’t do the steepness justice at all. 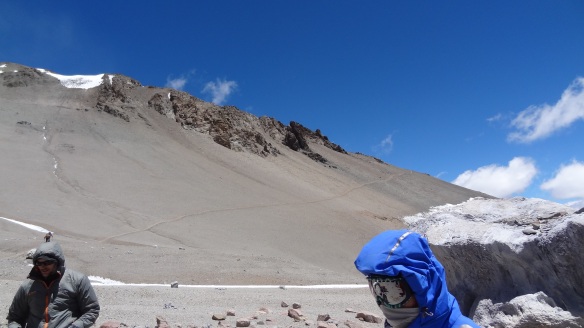 The traverse in the background which goes over the shoulder to Camp 2. 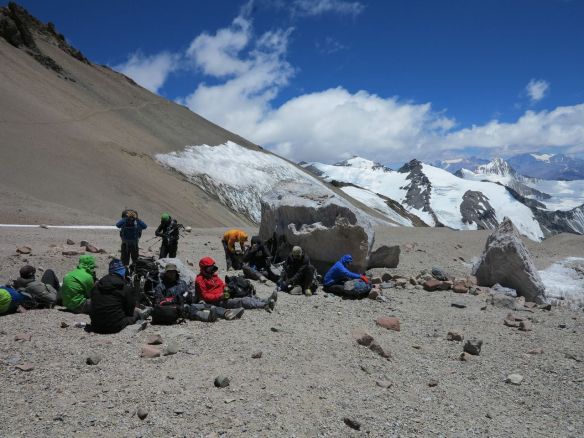 Lunch break for the group just before the traverse.

After a lunch break below the glacier we began the final climb up to Camp 2. The wind was howling and my hands were cold even in ski gloves. This mountain is really unforgiving. Towards the top of the slope I began to get dizzy. I felt a bit like I had when I had the HACE episode on Elbrus this August, if not quite as bad. I stopped, waved everyone else by me, and was attended to by Johnny and Tincho. They were great, calmed me down, got me deep breathing, and took my Sats. My pulse ox was 74, which they said wasn’t too bad, and after a further examination they took probably 18 of the 20kg in my backpack off me, and said I was good to continue if I so wanted. I did, not at any cost, but I felt ok enough to carry on slowly.

I came into Camp 3 probably 20 minutes behind everyone else, feeling pretty down. I thought my trip was over right here. Having sat down and had a drink and a bite to eat I tried to survey my surroundings. Camp 2 is a very inhospitable place, very exposed, albeit with utterly incredible views over the Andes, something we hadn’t seen up until now. I was too weak to take my camera out of my bag, sadly, but if I get a picture from here from anyone else, or manage to ever get back, I’ll post one right here. 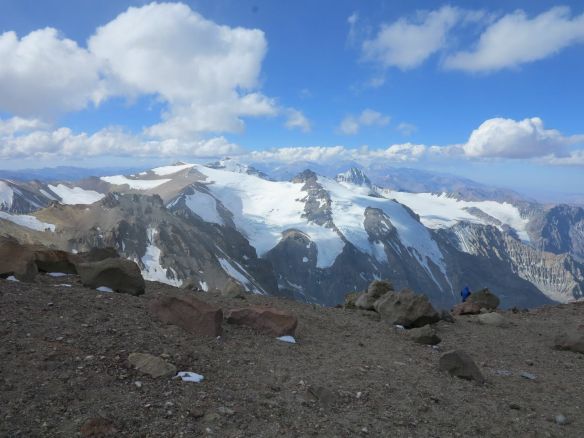 So here is a view from Camp 2 looking northwards over the Andes – the mountains facing us are just under 6,000m in height.

We headed down pretty sharpish, and I began to feel better with every step, the relatively oxygen rich air helping my hypoxia by the minute. The weather got worse though, and a big blizzard swirled around us – I was only glad that it wasn’t like this on the way up. Aconcagua was baring its teeth and reminding us who was boss around these parts.

We all got back into Camp 1 together at about 4, and I crashed out straight away. I wondered if I had gone as far as my body was going to take me on this mountain, or indeed ever, as far as altitude was concerned. I didn’t want to quit, but I think it is important to be philosophical about these things, particularly given my recent experience.

The weather continued to be shocking – the wind howling, and snow not falling, but beating on the tent in sideways and sometimes upwards swirls. Down jackets, long johns and woolly hats remained firmly on, even inside.

Peter brought us a pasta dinner at about 7pm, and took my Sats again. My pulse ox was up to 78, although I had a headache. I asked him straight if I could or even should continue. He said I’d be fine as long as my headache went away and I felt fine later in the evening. I felt a mixture of happiness and trepidation at the news – on the one hand I’ve come so far and am so close (although 1.5 vertical kilometres) to getting to the top, and on the other I don’t want to die trying, to put it bluntly. I decided to see how I felt in the morning and not dwell too much. The phrase “tomorrow is another day” had simply never, ever, been so apt, and in this case, tomorrow would literally be another year!