So day one trip to India and then Nepal is fairly uneventful to start with except for a bit of a momentary panic at Heathrow. Having packed and unpacked (and weighed and re-weighed) my main holdall fairly religiously I knew that I was at around 22kg. I also knew that my weight allowance was 20kg, but I have my rucksack with me as my carry on, and so I am braced to have to take a few things out at check in if I get a strict check in clerk. 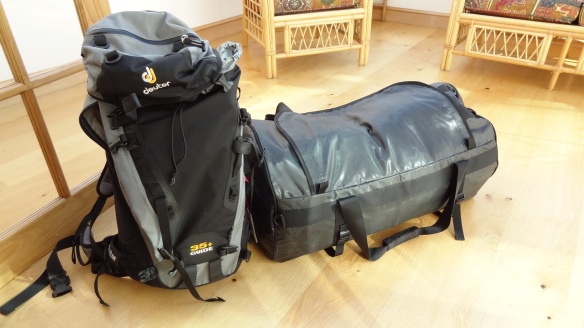 This lot has to see me through 22 days somehow...

As my bag goes onto the scales however it is 24.4kg! Whoops – that must have been the extra few pairs of underwear and T-shirts I threw in at the last moment 🙂 Anyway I needn’t have worried, and it doesn’t even trigger the slightest flicker. Most people around me travelling to India seem to have three or four suitcases each. I don’t see too many rucksacks or walking boots in evidence, so there aren’t a whole load of people going my way it seems.

So my first time on what is almost Indian soil, except it isn’t, as I will not be leaving the airport, is a shock, in actually a great way. I had expected Delhi to be all, you know, third world. My only real thing to base that on was flying to places like Sri Lanka and The Maldives. Neither of those places would you wish to spend any longer than the bare minimum in the airport. Then there is Africa – when I went to Kililmanjaro it was definitely a case of ‘welcome to Africa’ when I first got to Nairobi Airport. The place is filthy and horrible at best. Delhi airport however was actually pristine. 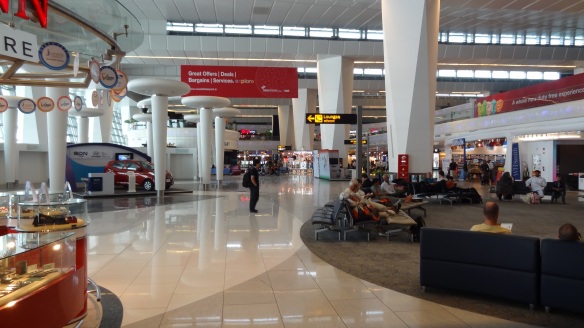 Inside Delhi Airport - what a pleasant surprise it was.

My flight on Jet Airways from Heathrow was actually great – I had not heard good reviews on them, but the service was friendly, the plane was clean and modern, my food was very nice, and they didn’t charge me for three gin and tonics and a couple of glasses of wine, so they get top marks from me.

When you do land in Delhi, the very first thing you notice is the smog. I have no idea how many quadrillions of people live in Delhi, but you cannot even see from the airport terminal to the runway. It is also hot, unsurprisingly, but the airport is very nicely airconditioned.

I arrive and find my way through the International Transfer lounge, and expect a tin hut. I couldn’t have been more wrong. I find the plushest terminal I have almost ever seen. I find shops by Boss, Gucci and Tiffany. I see the most beautiful and clean architecture. The floor is polished so beautifully you could eat your dinner off it. There are almost no indications that you are not in say Copenhagen. I do see a few signs, like the odd presence of a ‘Self Medication’ room. I decide to pass that one by, and instead hook up to free Internet access and plentiful (British three pin!) plug sockets to charge my various Apple devices.

I then board another Jet Airways flight, this time to Nepal. The flight is reasonably short and uneventful, other than sitting next to a guy from Wisconsin with a very dubious looking haircut, and a diplomatic passport, whom I decide is some sort of air Marshall type, unlikely as that sounds over in these parts! 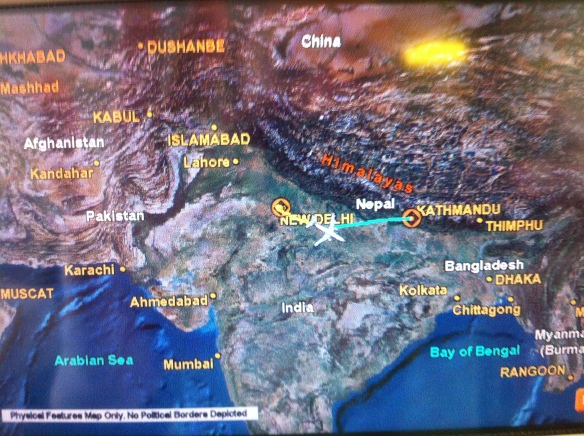 Landing in Tribhuvan International Airport in Kathmandu, I am met by Ngima, who is to be our guide for the whole trek. He is Nepalese, and a really nice guy. I also immediately meet six of the other seven people in the group. They are Stefan from Manchester, Tony from Hull, Ben and Bruce from Norwich, and Dave and Mo from Hampshire somewhere. All seem great. The remaining guest is on a different flight and will arrive later – he is Rob from Surrey, and he is to be my roommate/tentmate for the entire trip. Most people apparently have oodles more mountaineering experience than me with the exception of Ben, who like me has only done Kilimanjaro before.

Journeying through the streets of Khatmandu to our hotel, the Royal Singi, is a real eye opener. It is almost like being back in Arusha, Africa, all over again. The place is filthy, with ridiculous traffic congestion and air pollution, a thousand horns blaring a once, and the streets lined variously with beggars, street sellers, cattle and dogs. Every vehicle stops for nothing, it is a complete free for all at all times.

The Royal Singi Hotel is not bad at all, and better than I was expecting. We have a quick briefing with Ngima, and then after surrendering passports and filling in various forms, he tells us he will take us out for dinner into Thamel, the busiest part of town. We head to a place called Kilroys, a restaurant run by a British guy and the food is a very eclectic mix of British and Nepali. They have Dhal Bhat on the menu, and whilst I feel like I should be eating something local, I’m told that I may well be eating that every day on the mountain, so I opt for a Balti Chicken instead, which is great, if really spicy. It is washed down by my first Everest Beer, which is just what the doctor ordered. 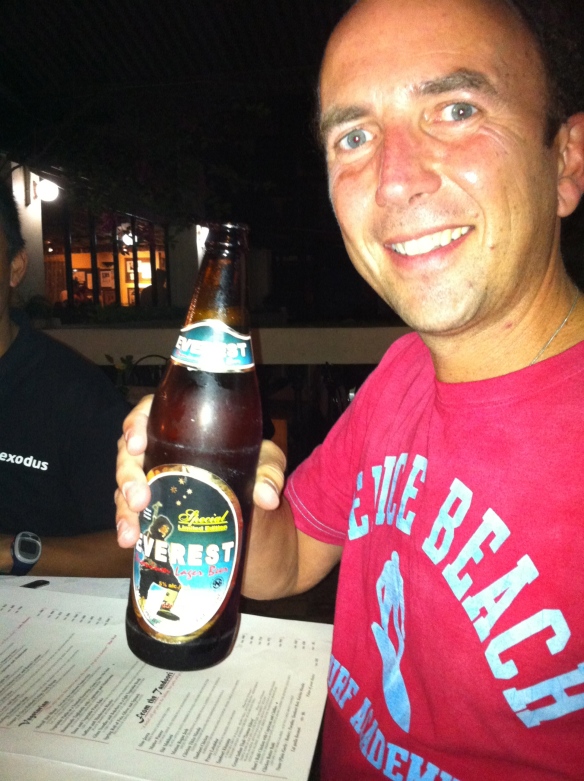 My one and only beer for some time methinks......

An early night ensues, as having spent the previous night flying to India, no-one has been to bed for effectively two days. Sleep therefore comes ridiculously easily, and I look forward to seeing some of Kathmandu the following day. It is great to be here, although I am feeling a bit uneasy about the trip itself, as all of a sudden I am here, and it cannot get more real than this, and yet it is all so different and unknown all of a sudden. Tomorrow morning we will also get kitted out with our climbing equipment, and that is certainly something to sharpen the focus entirely.