The rest day at Base Camp (4,200m) was much needed for two main reasons. Firstly we had ascended 1,000m the day before, and everyone needed a chance to try to acclimatise. Secondly I had one of the worst nights sleep I think I have ever have had,. This was caused principally by the fact that Kuntal (my tent mate) was snoring so loud that it could have woken the dead. I learned later that Gary, whose tent was some ways away from ours, had to put earplugs in himself to get to sleep. So in my case without earplugs it wasn’t fun at all. I did wake him up about three times and ask him to roll over, but it made little difference. It also went on all night, and twelve hours is a long time to listen to that.

After a ridiculously good breakfast of porridge, pancakes and eggs, everyone set about doing what the day was for – i.e. resting. We then had a scheduled appointment with the camp doctor at 11am to check on whether we were healthy and acclimatised enough to climb the mountain. This in my view is a very good thing. The tests would measure pulse, blood oxygen saturation, blood pressure, and then listening to heart and lungs. It is compulsory for everyone who climbs Aconcagua, and if you do not ‘pass’ the tests you are not allowed to continue. 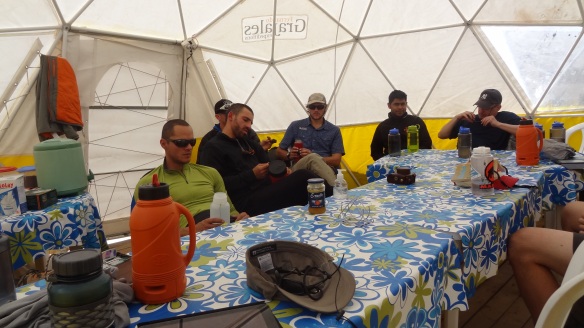 Down time in the dining tent – we don’t look too happy do we!

Unfortunately just before 11 as we were waiting we were told that the doctor wouldn’t be ready, as he was dealing with an emergency evacuation. Within about 30 minutes of this a helicopter arrived and some poor soul was taken somewhere to hospital, ailments (although presumably serious AMS) unknown. Such are the perils in the high mountains, and it is a good thing that this Base Camp is so well equipped to deal with them. The fact that there is a resident doctor also shows how high the incidence is of such happenings, and it wasn’t the first time we saw the helicopter that day. 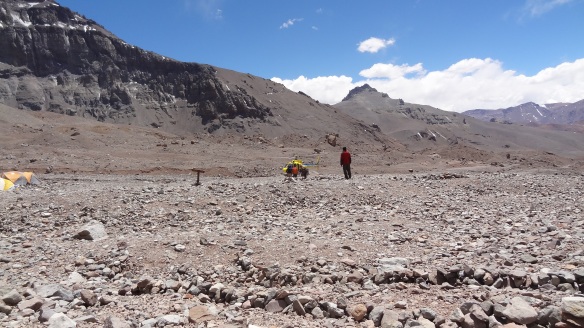 The rescue helicopter on one of a number of visits to camp.

Our appointments were rescheduled for 6pm, and so the afternoon was spent generally faffing with kit. We now basically had to do he reverse of what we had done so far, as the really serious stuff was ahead of us. Tomorrow the mules would take down our duffle bags, and we would begin the process of carrying everything up the mountain. We had to therefore pack all of our mountain equipment, and anything in fact that we might need between now and the 9th January, into our rucksacks. I had a short walk to just above the camp, and was exhausted in the thin air even without a heavy pack on – I could only imagine how hard it was going to be the following day with full pack on. 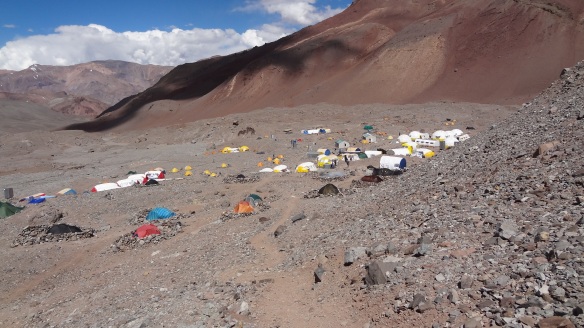 A look down on Base Camp from just above…… 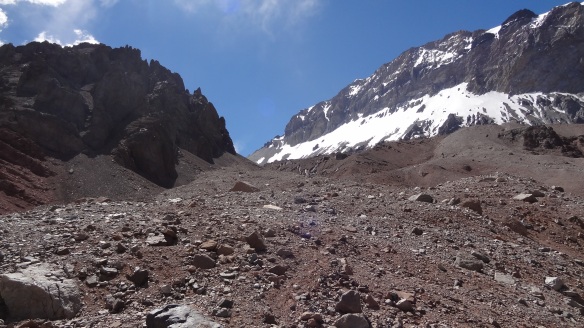 ….and a look up at the slope we’d face early tomorrow on the first of our proper carries.

The packing over, and my 90 litre sack bulging at the seams (and this before being given a further 8kg of group gear the next day), we could finally see the doctor.

The examination was thorough, and lots of questions were asked. I disclosed my HACE from Elbrus, and this was duly recorded, but it didn’t phase the doctor. My stats, for the record, were pulse ox of 88 and 120 (pulse the latter, obviously), and my blood pressure 145/85. Everything else in terms of heart and lungs were normal.

The doctor told me that my blood pressure was a little high, if nothing to worry about unduly, and that I should lay off any salt for a few days. He also said that my resting pulse of 120 was a sign that I was dehydrated, and to drink more. I was already drinking a good four litres of water a day, but now that we were higher I knew I needed more, particularly as the Diamox makes you pee a lot more than normal. Everyone else passed too, but with a couple having to return the next day for further blood pressure tests.

So with that we had dinner, surprisingly of pasta not steak, and an early night at about 9pm. Tomorrow morning we would have to carry about 25kg, the biggest load of my life, up to Camp 1 at 5,000m. I can only say that I was a little apprehensive……

Day six began with a very early and very frosty start at 5.30am. We’d be climbing about 1,000m today to Plaza Argentina, which is Base Camp on the Guanacos side of the mountain. The plan was to set off at 7am before it got too hot so we could get up the valley just after lunch, by which time at 14,000 feet (4,200m) the temperature should be very bearable, and so it was to prove. 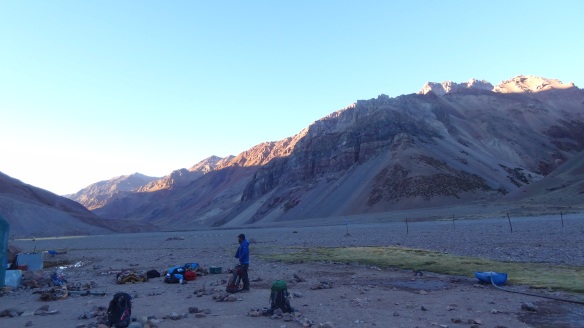 A cold start to the day before setting off up the valley…..

The outside of the tents and the river bed between us and the valley were frozen as we set out. Our first objective was the river itself. We’d been told to bring sandals for the river crossing so we could wade across. The river however wasn’t wide at all, as the conditions were unusually dry, and so the guides had originally asked the muleteers if they’d carry us across on mules. They’d apparently said that there wasn’t enough in it for them, which I assume meant money, and so we figured we’d just do it under our own steam. 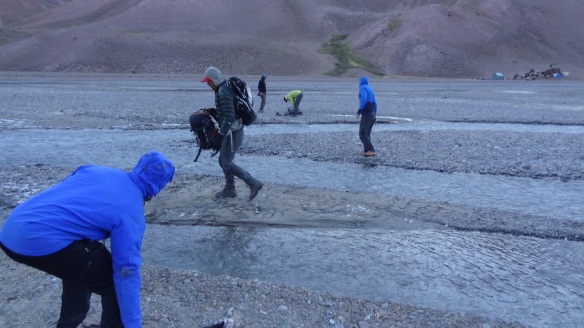 Crossing the river bit by bit, it wasn’t deep, but it was mightily cold!

In the end we did it with a combination of jumping, throwing and passing backpacks, and wading, depending upon your inclination. Either way we all crossed safely and successfully and began the climb up the valley. 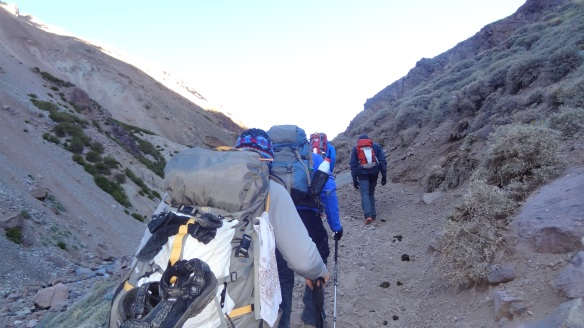 The path starts to climb fairly steeply in places, and it is still very cold out of the sun.

The path up is a bit precarious in places, requiring the judicious use of hands clinging onto rocks at times, and not looking down. A slip down would have meant about a 100 foot fall at times, so this isn’t a trek for the faint hearted. 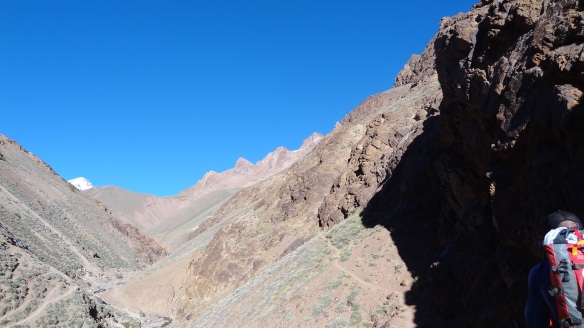 A fleeting view of the top of the snowy peak of Aconagua in the far distance.

Eventually after about an hour and a half’s climbing, steep in places, we got our first sight of ‘the’ mountain. A perfect day, cloudless, the top of the mountain clearly in view above the Polish Glacier, a now unused (due to rockfall and crevasses) and dangerous route. Even from what was probably 15 miles away, Aconcagua looked gigantic. A monstrous and foreboding edifice of sheer rock and ice. It practically looks (to me at least) unclimbable from this side, which I believe it actually is. Our eventual route would take us around the North side of the mountain over a Col, to traverse past the Polish Glacier. But that was a long way off yet, probably 9 or 10 days still. 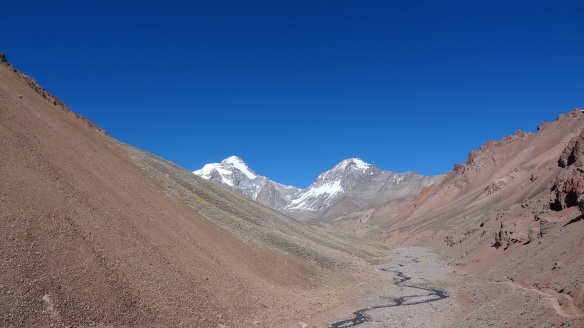 And more of the mountain comes into view – Aconcagua is on the left.

We carried on up the valley as it opened out into a vast expanse of rocks and scrubland, glacial moraine from probably centuries ago. Lunch was taken in full view of the mountain, which continued to look even more daunting (and higher) the closer we got. It was easy to forget sometimes that from even where we were, at 13,000 feet, the summit was still 10,000 feet above us. And at other times it looked like it went up forever. 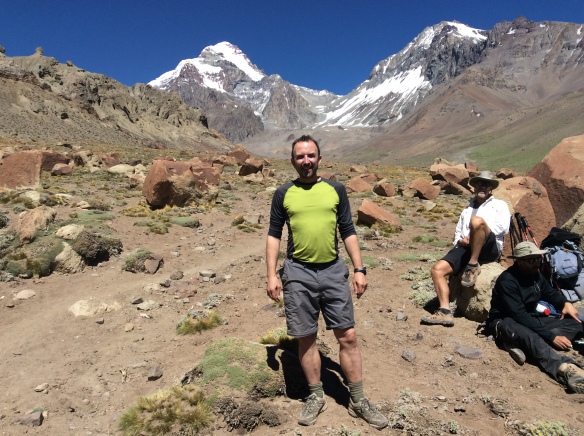 And it opens up more – the day getting really hot now, despite the elevation we were at (about 13,000 feet here).

The path then continued or more obvious moraine until eventually Plaza Argentina, or Base Camp, came into view. We arrived at about 2pm, and were greeted with apple juice, nuts, biscuits, cheese, salami and crackers, all served inside our own dining tent! It was fabulous luxury, and couldn’t have been more well received by all of us.

Plaza Argentina is finally here – home for the next few days.

Plaza Argentina is huge, with probably ten or more expedition companies having semi-permanent tents set up there. This would be our home for the next three nights. The remainder of this day we would set up tents, eat and get established. Tomorrow would be a rest day by and large, with a medical examination thrown in, and also sorting out which kit went up the mountain and which went back down. The day after we would go up to camp one, stash equipment, and come back to sleep at Base Camp. All of this was part of our acclimatisation schedule. Going up 1,000m as we had today is tough on the body, and it needs time to get used to the rarefied air. 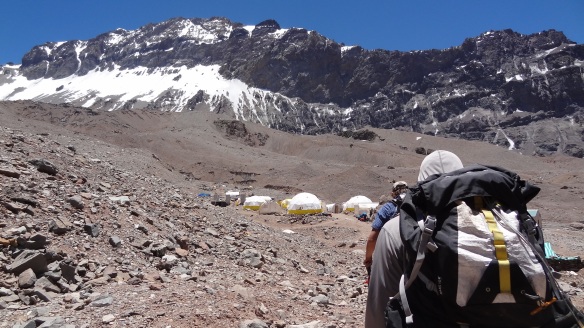 The tents of Base camp finally come into view. We’d still pitch our own of course.

My tent pitched at Plaza Arentina looking up the valley, where we’d head in a days’ time.

By the time evening came everyone was settled in, and dinner of steak (what else?) and mashed potatoes was served. I was enormously relieved to see that Malbec did not make an appearance for the first time on the trek. Odd though that is for me to say, we were now in mountaineering mode, at altitude, and it was time to get very serious indeed, as if anyone needed reminding. The other difference was the cold – it was now getting seriously cold at night, even inside the tent, so the clothes we’d worn up until now would need to be replaced with something much more substantial. The mules had brought our duffles up this far, but they would now head down the mountain as this was as high as they could go – we’d carry everything ourselves from now on.

We didn’t need to appear much before 9 the next morning, the emphasis being on the need to rest for the time being. Unfortunately sleep came neither soon or easily, due to two factors – one the first night at high altitude is always tricky. Secondly my tentmate Kuntal was snoring like a tractor. Now I snore too, now and again – I know that through having been told enough times in my life :O But this was snoring big time, and I wasn’t doing it, I was listening to it.

Nonetheless we were here, at Plaza Argentina, and it was great. It was time to really get down to the business end of affairs now, and the next few days would sort out the men from the boys – I prayed I was strong enough to be in the former camp.