The final day in the mountains saw us waking up in the Pfeishutte in Austria, which is almost due north of Innsbruck. The Pfieshutte sits at about 2,000m, and was very busy. We were in the uppermost dormitory, in a room meant for (I think) 10, and I reckon there were probably 14 in there, which made it a little cosy. Thankfully I had what approximates to a single bed, the only one I have ever seen in any mountain hut, and since I was waking up with my leg strapped up from yesterday’s fall, I was very grateful to be in it. 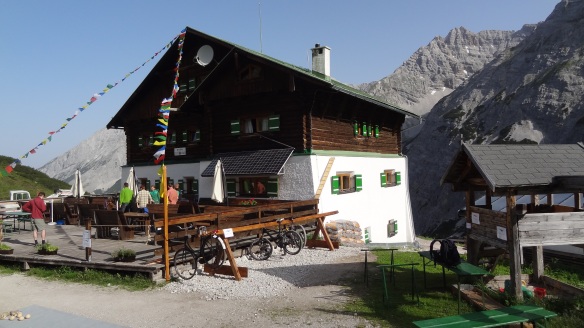 The Pfeishutte, on the morning of our final day

We set out after a very nice breakfast of the usual mountain fare, and headed for a pass which would ultimately take us down a steep scree path, from about 2,250m to the valley floor just outside Innsbruck at around 700m or so.

The top of the pass on the Goetheweg trail.

Reaching the top of the pass was pretty easy going, despite the heat. We had heard that the weather forecast for Innsbruck was 37C (99F), which is much hotter than I think they ever get in that part of the world. Although we were considerably higher than Innsbruck itself, the temperature was still brutally warm to be doing any kind of physical exercise. 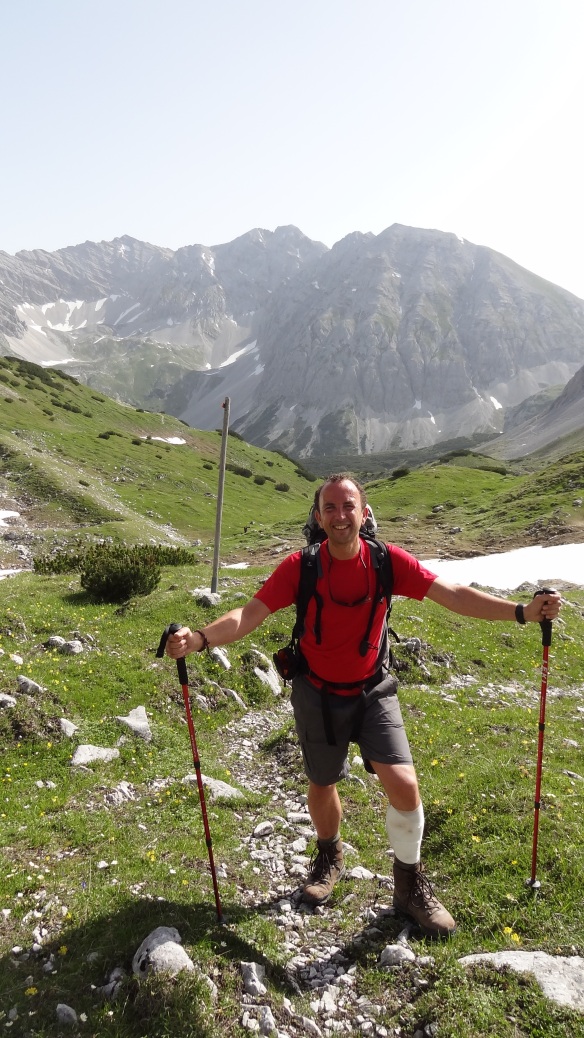 At the top of the pass immediately before the descent to Innsbruck.

We then came to the start of the descent. The path was essentially just scree, and very steep. It was hard not to slide on almost every step, which made the heat seem even worse. It was also hard not to look at the view of Innsbruck and the Alps south of there, which totally dominated every view.

The beginning of the descent, Innsbruck in the valley far below

After a while of sort of stumbling down the hill and wondering how long it would take, we were passed at great speed by a couple who were scree-skiing. The penny then dropped that this was really about the only way to get down, and certainly quicker, and probably just as safe, so we went for it. 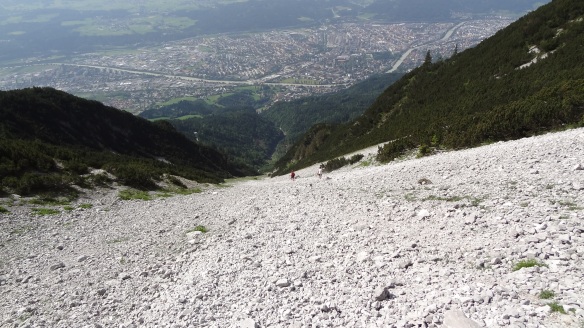 …..which brought Innsbruck ever closer…….

….even if I sometimes ended up……

…….sitting on my backside!

When we got down to about 1,200m or so, there was a very welcome hut called the Rumer Alm, where we stopped for lunch and a drink. the temperature by now was really hot, even in the shade, but the break was very welcome nonethless.

The walk down from the hut to Rum itself (a suburb of northern Innsbruck) was about a further hour, and was basically a beautiful walk through a stunning pine forest. 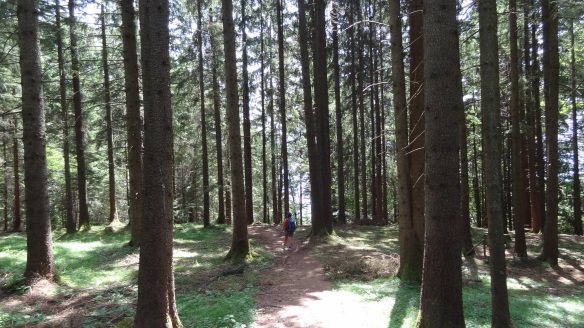 The walk down to Rum from Rumer Alm

By the time we reached the very bottom, where we would get a bus back to Absam (where we had parked the car three days before), we could see back up the mountain to the top of where we had descended from:

The view back up to the Goetheweg (far distance) from Rum, Innsbruck

From here after the bus we returned to Achensee on the way back (and the World Cup final in an Italian Bar full of very miserable Italians by the end of the night!) before returning to Munich for the flight back to the UK.

The Karwendel Alps had been great. Considering I had never even heard of the region itself only a week before going, it had been a real surprise in terms of what it had to offer, including the diversity (and difficulty) of terrain, the beauty of the mountains themselves, and the hospitality and friendliness of the Austrian people. Blessed also with wonderful weather, great company, fine food, and some very fine mountain huts, it made the trip hugely enjoyable. I resolved that it should not be long before I returned to the region, something that as it turned out would be a lot more prophetic, and indeed imminent, than it first appeared……..