This evening would see our summit attempt on Elbrus, at 5,642m the highest point in all of Europe, leaving at around midnight. Before then it was a case of resting up as much as possible, getting kit ready, and trying to pass the time. The day was generally calm, although a bit cooler and windier than it had been, which left people wondering how conditions would be up on top. Yesterday’s acclimatisation walk had been in perfect conditions, but everyone knew that there would be no way we could expect things to be that benign all the way, even if the only forecast we had was a pretty good one.

In fact the weather forecast dominated pretty much everyone’s thoughts for most of the day. It was frustrating (and probably my only real criticism of Jagged Globe the whole trip) that even our expedition leader Adele Pennington didn’t have access to any sort of weather forecast. In fact the only way she could get access to anything substantive was to ring her partner via Sat Phone back home in Fort William, Scotland, to look things up on the internet for us. Sadly he was out, and so couldn’t oblige. The reason we needed it was to try to predict wind speeds at the top of the mountain, and they didn’t look good.

Our in country guide, Viktor, who had summited the mountain over 100 times, spent a fair bit of the time looking at the top of the mountain over the afternoon. He said “it doesn’t look good, wind may be too high”. 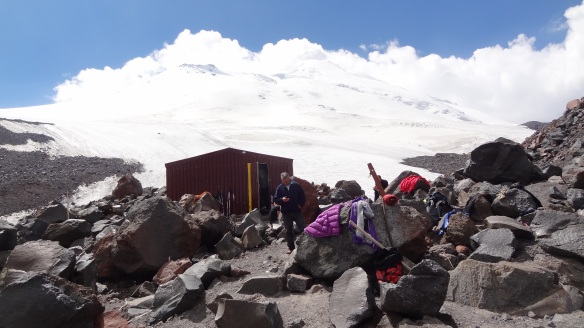 Viktor ponders what to do whilst the clouds begin to gather at pace over the summit.

For the rest of us, we had no phone signal, no internet, no access to anything whatsoever, and it is at times like this that you realize just how much you miss those things. We did eventually manage to get one text message (thanks Hui Ling) away between us, which gave a response of 25 kph winds, clear, and -10 degrees. So on the basis of this, it looked like we were going for it. Whilst nervous, that was just what everyone wanted to hear.

By mid afternoon therefore, most people were basically ready with their equipment, and most (me included) chose to spend time resting or sleeping. We would after all not be going to sleep at all tonight, and would have (if successful) a 17 or so hour slog taking us through from midnight until late Sunday afternoon. The ascent would take a predicted 12 hours (we had over 2 vertical kilometers to climb), and then about 5 coming down all being well.

Viktor by teatime was again looking at the mountain somewhat nervously (or that’s how it looked). He however just pondered and said that we would decide at 11 O Clock when we all woke up. Everyone therefore went back to bed after dinner at about 8pm and tried to sleep. I didn’t sleep a wink, nervously waiting for the opportunity to hopefully get going.

When we got up again at 11pm, all was fairly calm, and a breakfast was duly prepared for us. We got porridge (proper version this time, not the buckwheat variety) and somewhat bizarrely, caviar. I didn’t really feel like eating anything at all, let alone caviar, but took some chocolate off the table for sustenance (there was always plenty of chocolate sweets around, and biscuits, which were considerably better than the bread, and softer too).

At midnight it was into our our harnesses, and this was it – it was happening! It was happening for all of us bar Dave that is – he decided after a day of deliberations (and a bit of a dicky tummy too) that he wasn’t going to make it, so decided to stay in camp.

Headtorches on, crampons tightened, we are off!

So in calm but cold conditions, we set off into the night to conquer this big monster of a mountain, all 2km of further height to go. We were prepared, or so we thought.

Within an hour, and moving well on three ropes (two fours and a two), we were confronted by what was initially just a squally headwind, which although it began to burn spindrift into our faces, was entirely manageable. Within an hour and a half however, and with probably only four hundred metres or so gained, it was battering us with every step.

Within two hours it was actually hard to stand up, with the spindrift sheeting into our faces.  There were other head torches around us on the mountain, but it was very difficult to tell at times which way was up and which was down. All you could really do was look at the boots in front of you, and hope they were heading in the right direction. The wind was deafening to the point that you couldn’t have heard yourself scream, and without goggles there wouldn’t have been any way of seeing through what was now basically a whiteout. It couldn’t last, and something simply had to give, either the weather or us.

By about 3am or so we had reached Lenz rocks, and I am not sure even how, but it was good at least to have some definition and know where we were on the mountain. This was about 4,650m. I have no camera shots of this, as I didn’t dare even try to get it out of my bag. There was another group in front of ours, and they were sheltering at the rocks. They seemed to do so for all of about 5 seconds, before about turning and heading straight back down the mountain. Their decision to go down I suppose made it easier for us to reconcile, and with no thought at all from any of us we very happily and unspeakingly followed Adele and Viktor’s lead and got the hell out of there.

There was no dissention in the ranks at all. It would have been at best dangerous to go on, and each step as it was was getting harder and harder.

We headed down the mountain in one straight shot without a break, and got down to High Camp a little after 5am, totally spent. It had been so much effort just making forward momentum at times that no-one probably could have gone on for much longer anyway, even if the weather had miraculously abated. No-one from anywhere summited the mountain that night – and when I look back now at the forecast wind speed of 25kph well I think you could have trebled that and been nearer the mark. What conditions would have been like further up I dread to think.

Safely down, it was straight into bed for a sleep and a rest. No-one cared at this point what the next day would bring, we just needed to get into sleeping bags and crash. I cannot remember ever sleeping so easily or well, and that is coming from someone who sleeps like a log every night of his life.

So maybe the next day we could try again, as we had a spare day and a half built into the itinerary for such contingencies. That was if we still had the legs. But tomorrow, even though we were already into it, just seemed for now like an awfully long way off.