I have been known to buy the odd gizmo and gadget in my time. From Swiss Army knives with more blades than the entire Swiss Army could use, to kitchen gadgets which do everything but turn the cooker on for you, I have had plenty. They never really get used of course, but maybe that’s part of the appeal!

Take the journey to Kilimanjaro for example. I use an iPhone in ‘normal’ life, but of course the battery life is next to useless even when you have daily access to electricity. I knew that there was no way it would last me a week or more on a mountain, even if it was to be turned off for 99% of the time. So when I went there I took with me my old Blackberry, and before I went I bought me a nice gadget called a Powermonkey, which is a solar charger for your phone. Looked great, £60, sold! I took it with me and it basically never got used, but it was nice to have as insurance, and didn’t weigh me down too much.

I also seem to have started a new trend of collecting watches. I bought me a cheapie Timex one for Kili, as I had heard that it is not advisable to walk around in Tanzania sporting a fancy watch (I wear an Omega Seamaster normally) for fear of getting it ripped off your arm by a mugger (they were probably right – Arusha was a pretty intimidating place at times I found). I then ‘retired’ my Kili watch as I wanted to keep it for posterity after I nearly lost it in a bike crash that I had (see my ‘Alain Jourdain’ post for that little story). I then bought another Timex with stopwatch stuff and the like on it for my bike ride. That one is still going strong :).

So this week I combined my trend for gizmos and watches and got me an altimeter! Yes well I needed one badly, obviously:) I did a bit of research, and looked at various options. Lots of them are ugly, all of them are pretty big, and they vary as what you get with them (e.g you can combine heart rate monitor functionality etc).

I plumped in the end for a Suunto. Suunto are a Finnish company who make compass products, diving watches, heart rate monitors etc., and seem to have a pretty good name. They are also known for their ‘Vector’ altimeter watch, which has been around for years apparently. What tipped it in the end was when I looked at Alan Arnette’s Everest blog ( http://www.alanarnette.com/blog/category/7-summit/everest-2011/ ) and saw in his kit list that he wore one too. That was good enough for me!

I looked at a multitude of different Suunto products and in the end plumped for the ‘Core All Black’, just because to me it looked the best and seemed to have the best balance of functionality (i.e. I hope to use the altimeter function in the Himalayas and take a photograph of it showing +6,000m when at Island Peak etc:)) and style. Well you don’t want something too silly on your wrist do you? 🙂 Here is a link to the watch (oh yes it even tells the time too):

I bought it from an internet retailer I hadn’t come across before, called Facewest. They do all sorts of outdoorsy stuff, including climbing and hiking gear, so I will use them again, as their customer service (having spoken to them on the phone too for a couple of things) was exemplary. I also was a bit worried that it would look a bit big, and quite frankly silly, on my wrist.

So having had a bit of a play with it, I think I have sort of figured out how to use it. It has all sorts of logs and the like for the altimeter, meaning that you can record journies and it will tell you what your descent and ascent was for the last ten trips, assuming you remember to set it etc., which it seems you have to remember to do manually.

So here is a picture of it on my wrist: 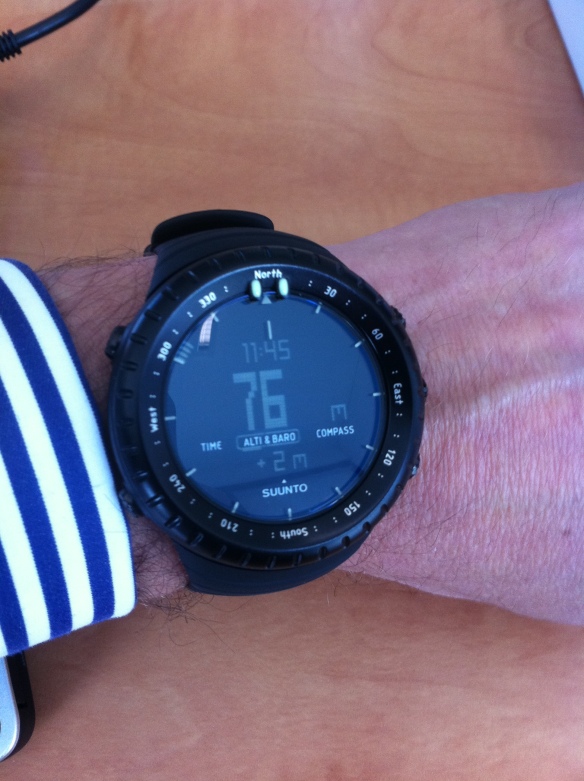 Is it massive? Yep. Does it look a bit silly? Probably. Will I use it? Who knows! I do like it though, so it is coming with me next week to Switzerland for starters, and we will see what it tells me in the Alps. I wonder if it has a button to show you how scared you are? Now there’s a great gizmo to have……