Today is a landmark day. I write that immediately after the end of the day itself, particularly as it has been so wonderful. It is the first day of a five day trip to the Karwendel Alps in the Austrian Tyrol. (As I post this online however it is six days later – the date was the 28th June 2012). It is my first trip to the region, and I have been looking forward to it for so long.

It started so early, with a 5am alarm call, and then a car ride to Heathrow airport which got me there before 7am. But despite tiredness early on, the day just got better and better.

A plane ride to Munich got me into Germany before lunchtime, where I met up with Verena and her friend Susanne, whom I was meeting for the first time. We had only loosely planned the day beforehand, and so upon arrival they suggested that we go and drive to a place called Achensee, where we would stay the night, before heading into the higher mountains the next morning. This was totally fine with me, and so off we went.

The car journey took us almost due South into Austria, and within about an hour and a half we were at a place called Maurach on the edge of the Achensee. I can only describe it as outstandingly beautiful. 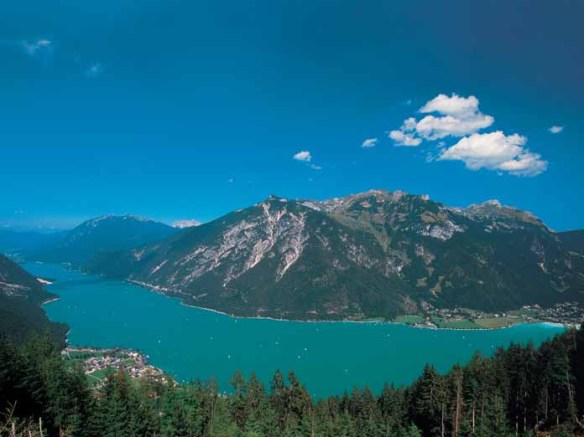 Above the Achensee, Austria.

After finding ourselves a place to stay for the evening we then duly plotted the following three days’ events. Verena had been really thorough and bought local maps and pinpointed all of the places we would go to in the mountains.  We planned to head the following morning to Absam (on the outskirts of Innsbruck), then hike up to the Bettelwurfehutte, and then summit the Grosser Bettelwurf (2,726m) the same afternoon. This sounded fantastic, and with everything sorted, we just relaxed for the rest of the afternoon and evening. 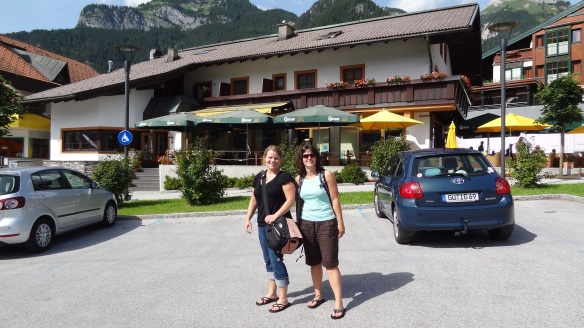 Verena and Susanne in front of our hotel in Maurach,

Maurach is at 931m and is characterised by a beautiful lake (the Achensee) which is a stunning shade of green. The temperature being so warm (around 27 degrees C or so) it just seemed entirely appropriate to go and join the locals and swim in the lake, so we did just that. It was wonderful, and the water was actually not as cold as I had expected it to be.

In the evening we went in search of both food and also football! It was the evening of the Euro 2012 football finals, and Germany were playing Italy (who had just conquered England four days before on penalties in the quarter final). After straying into a very fancy looking hotel where I am not sure if they have ever even heard of Euro 2012, we found (of all things) an Italian Bar!

The hospitality (especially considering Verena was fervently and excitedly shouting for Germany) was wonderful. Susanne is not as much of a football fan, but still obviously wanted them to win. After a great meal and a few Aperol Spritzers we settled down to the game, which unfortunately Germany lost 2-1. It made still for an exciting first night in the mountains, and Achensee made for a great base. We resolved at the end of the night to return on our way back on Sunday night.

So with the build up complete, and a long day over, in the morning we would head out to the Karwandel Alps, only about 30 minutes or so away. It was going to be fantastic. Sleep would come so ridiculously easily…..