I can probably only describe Bangkok as a baptism of everything. What do they say in the song again? “One night in Bangkok makes a grown man humble….” – well now I know what they mean.

I arrived last night on an overnight flight from London, and got in at about 4.30pm, Friday afternoon, and am here on my way to cycle 850km down to Phuket as part of my recuperation from my broken feet due to my running misdemeanours.

On the plane over, I had been talking to the guy next to me, who apparently comes to Bangkok four times a year (I didn’t ask him what he comes for :)), and he asked me how I would be travelling into the city. I said I hadn’t decided (in my own inimitable fashion) and he said “whatever you do, don’t get a taxi, just get the Skytrain”.

I considered what he had said, and worked it out like this: Firstly there are about 12 million people in Bangkok, and it is known for being the most gridlocked and crazy place on the planet. I knew that. Secondly it was Friday evening, and of course everybody wants to go somewhere at close of play on a Friday, especially in a place like BKK (as I know affectionately know it). Thirdly the Skytrain (which is what is says it is, a train on a 20 metre high overground track) takes about 15 minutes to the city and costs like 40 Baht, which is about 75p. So what did I do? I walked straight to the taxi rank having cleared immigration and got in the first taxi I saw. Mistake.

1: Taxi driver has never heard of my hotel (where have I heard that old ruse before), 2: “Gridlock” doesn’t even begin to come close, it is a car park the whole way. 3: Despite it being dusk it is 33 degrees centigrade, and I am sweating like I have simply never sweated before. 4: I am in yesterday’s clothes having not yet been to bed and having had about 2 hours sleep in the plane. Misery. 5: Don’t ask how much it cost me, but the journey was over two hours long. All I will say is that if you ever, ever, ever, travel to BKK, whatever you do, don’t get a taxi, just GET THE SKYTRAIN.

Having eventually freshened up and showered in my hotel after my 12 hour flight and (what seemed like) a 12 hour taxi ride, I took a walk into the neighbourhood. The hotel is nice, The Majestic Grande, recommended to me by the company that I will be cycling down to Phuket with, Spiceroads.

So walking into the heart of BKK, or the heart of the district that I am staying in, close to Sukhumvit Road, just totally blows your mind. It is a cacophony of sound, of smells, of sights. The first thing I see, literally, as I walk out of the lobby of the hotel, is “Annie’s Soapy Massage” staring at me in neon frontage. No joke. I have to walk past to get through to the main drag, and a number of ‘girls’ (or I think they are girls anyway, I’ve heard way too much about Bangkok perhaps for my own good) call out to me from the entranceway. “You come?” they beckon, and I half smile, half grimace, and half totally crap myself at the thought of me getting dragged in there.

And so begins what “happens” in Bangkok. I’d researched beforehand, as I wanted very much to know what places to see, and just as importantly what places to avoid. I’d been told that BKK is ‘safe’, but that’s not to say that you don’t need your wits about you. Being a single traveller is the problem in places like this, and as this is the place to end all places, it would seem!

The above shows a not untypical street scene from Bangkok. I am glad to tell you that I survived the experience unscathed 🙂

It is just ultimately so busy, so noisy, so brash, and anything, just anything, goes. If you want to buy something, you can have it. Almost every street seems to have market stalls running alongside, and you are, if not harrassed, then ‘encouraged’ to stop and indulge. After a couple of beers in a fairly safe looking haunt I managed to make it back to my hotel in one piece. I even learned in there (but not from first hand experience I am very glad to say) what the phrase “love you long time” actually means – maybe I’ve just lived a sheltered life up until now!!

The next morning I was determined to see some of the ‘proper’ sights, and the concierge at my hotel suggested the Grand Palace as the place to hit. He wasn’t wrong. The Grand Palace is made up of a huge number of buildings and has been the residence of the King of Thailand (formerly Siam when the palace was built) since 1782. I don’t know where to begin writing about it, and could put down about four pages just about my experience there. Here are some pictures instead: 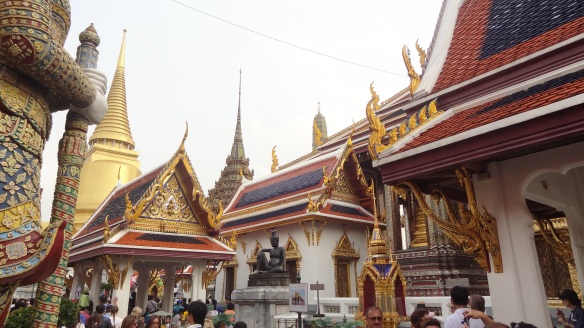 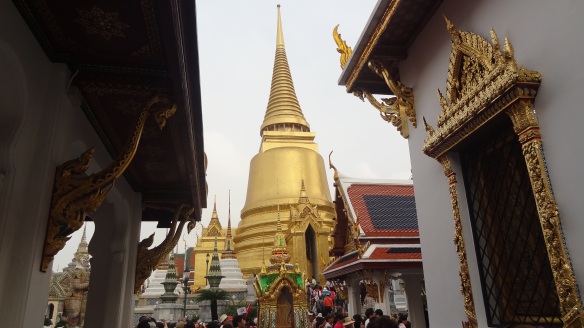 I can’t remember the names of all of the different buildings above, but these were only a few of so many. I said “oh my God” about 447 times as I was walking around. The highlight was the Wat Phra Kaew, the Temple of The Emerald Buddha. The inside (you can’t take photographs in there) is mindblowing, and that’s not the sort of thing I would ever say going into or out of a temple normally. I’d describe the whole thing as the best visit to any man made thing I’ve ever seen in my life. If you are ever anywhere close, just don’t miss it.

After the Grand Palace I went and took a boat over the river (called the Chao Phraya in case you want to know) and went to Wat Arun, another of the recommended ‘must see’ things in Bangkok. 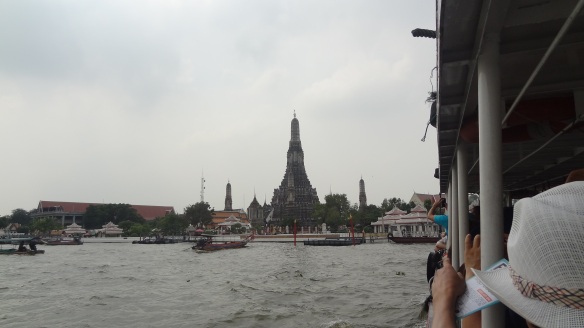 The above is taken from the boat on the river, which cost me all of 3 Baht for the journey, about 6p. Wat Arun, or the ‘Temple of the Dawn’ is a 17th century temple so named as it reflects the light from the early morning sun from its porcelain structure. It is stunning, and again really worth the visit. You can climb about two thirds of the way up, although the steps are precipitously steep and not for the faint hearted. The views back over the river and to downtown Bangkok are well worth it though.

By the time I’d finished at Wat Arun, it was ridiculously hot, and also my right heel (which I shouldn’t be walking on too much yet really) was hurting like hell. I’m still only 8 weeks in from it being broken, and I have only been walking properly for about 10 days, so I called it a day, and jumped back on the boat back over the river.

I tried in vain to get a taxi back to my hotel, but at least six taxis refused to take me. They just didn’t fancy the traffic downtown, even at a weekend. Incredible. Eventually therefore I found the good old Skytrain, which wasn’t too far away thankfully, and I rested up for the rest of the day and evening in a bit of pain.

My only foray out of my room was to get a traditional Thai massage that evening, which I had booked earlier that day, and involved me only getting up and down in the hotel lift. I’ve only ever been in a fight once in my life as a kid, and all I will say is that getting punched and kicked then (which I can still remember) was infinitely nicer than my massage. It felt like I was being smashed with an anvil and beaten with sticks. Thankfully it only cost me about £6, so that was the only saving grace.

In the morning I would get picked up at 7.15am to begin the business end of my trip, the long cycle south. It had been a wonderful and eventful view of Bangkok, my first ever time in the Far East. A wonderful place, and an education in so many ways, and so so happy just to be here in the first place. Happy days indeed……..