As days go, apart from those on the mountains themselves, this day will stand out in my memories for an awful long time. To be on a boat trip in perfect weather, and lunching on The Island of the Sun in the middle of Lake Titicaca, is surely something that few people will ever do. And here we were having it thrown in as part of our acclimatisation routine.

When I had first read the trip dossier and had seen the listing for Titicaca, I had been if not exactly non-plussed, then certainly not over-excited. I can only say now, having had the privilege to go, is that it is a totally stunning and magical place, with some views that will absolutely take your breath away. I will put a picture here below of my lunch spot, taken from the Island of the Sun, looking over the Island of the Moon, with the Cordillera Real spoke of the Andes mountains framed by the sun over Lake Titicaca herself. The phrase “died and gone to heaven”, whilst an overused cliché, is here simply a gross understatement.

We set out at 8am and walked through into Copacabana past the still partying Peruvians. I wasn’t sure if they had started early, or were still going from the night before. Certainly the fireworks has been going long into the night, and made what would have otherwise been an idyllic and tranquil stay at the EcoLodge an interrupted night. 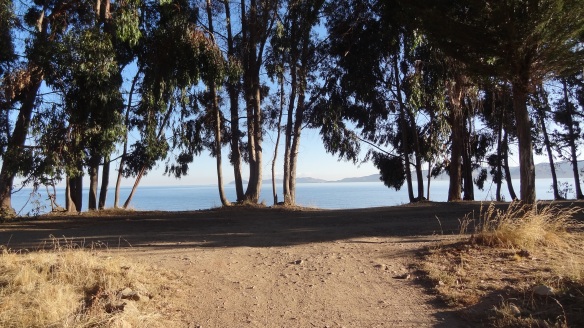 The view of the lake walking out of our lodge….. 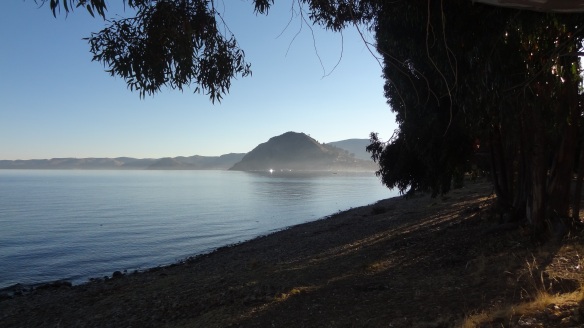 …..and the view along the shore looking towards Calvary Hill where we had walked up last evening. 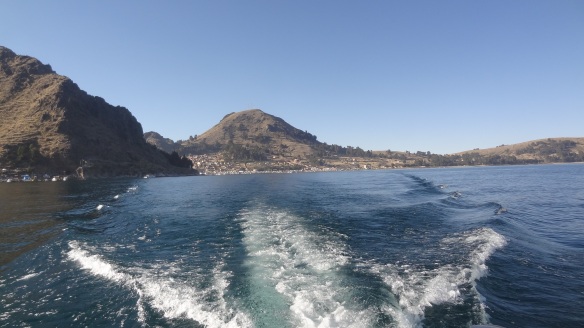 ….and docking on a tiny jetty at Isla del Sol.

A boat awaited us and took us across a ridiculously tranquil part of the lake, past the hill we had climbed the night before, and towards the island which awaited us. Some 10 sq km in area, the Island of the Sun is the largest island on Titicaca, and takes an hour to reach by motor boat.

We reached the island by small inlet and a tiny jetty, the only boat around, and were taken up some steep steps to a ruined 11th Century fort come temple, which looked over to the Peaks of the Andes in the distance, and Illiampu (6,430m) in particular. 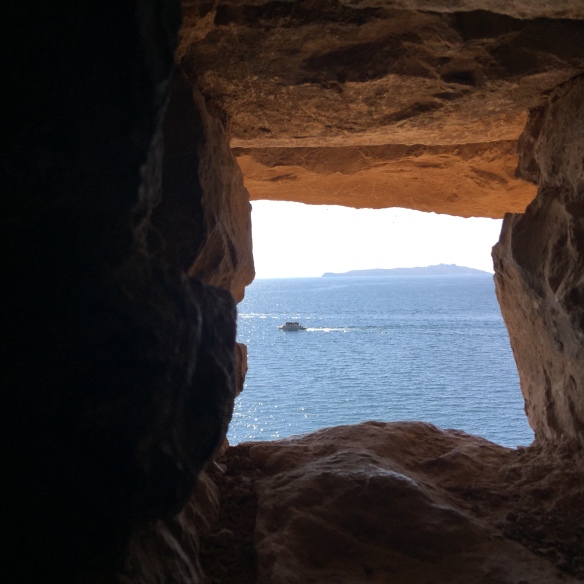 A view out from the stone fort.

After a brief look at the temple, and some really great explanations on the local flora and fauna by César our guide, we began our trek up to the high point of the island, at 4,100m, so some 450m ascent for us. We discovered afterwards that technically there is another part of the island which is 4m higher, but that is a by the by. 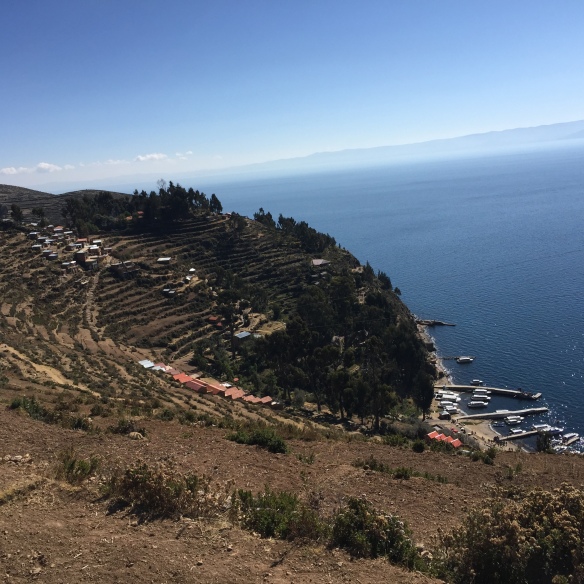 The terraced landscape shows the island’s reliance on agriculture for its produce, some of which we would sample later at lunch.

A typical island building, and its only form of transport in the front garden.

Resting at the high point by a light tower we took the following pictures: 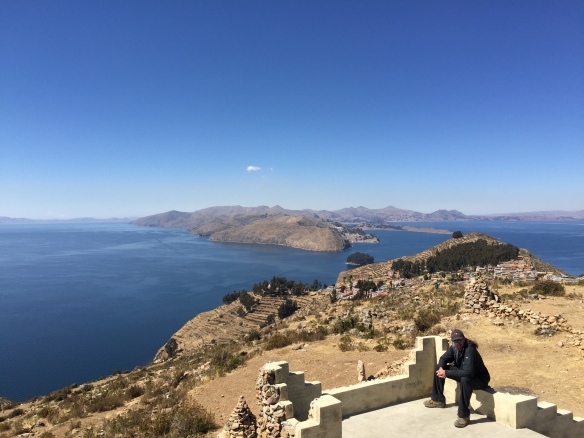 ..and slightly west, back towards Copacabana (out of shot here)… 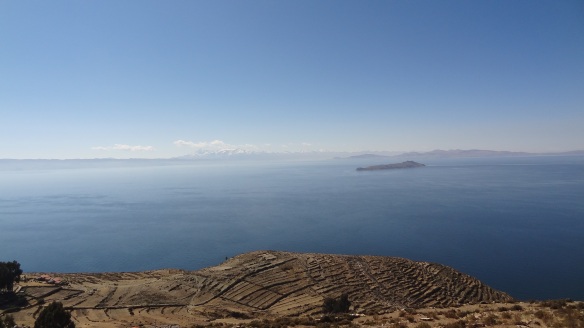 ….and South towards Illiampu and the rest of the Cordillers Real, the Island of the Moon in the foreground. I could have stood here forever.

And here is our whole group – from left to right, Lesley, Alessandro, Jim, John 1, Laura, Yours Truly, Gavin, Lotte, Patrick, and John 2.

We then began our descent towards the main port of the island and to a most majestic and beautiful inlet, with such pretty flowers and walkways that it could have been from a fairytale. Our boat awaited us and took us back around to the inlet we had first docked and we walked back up to a small stone house, where we were served a local Indian buffet of corn, potatoes, trout, chicken, and vegetables. It was amazing, and with the backdrop of the picture earlier, will go down as probably the best lunch I have ever had. 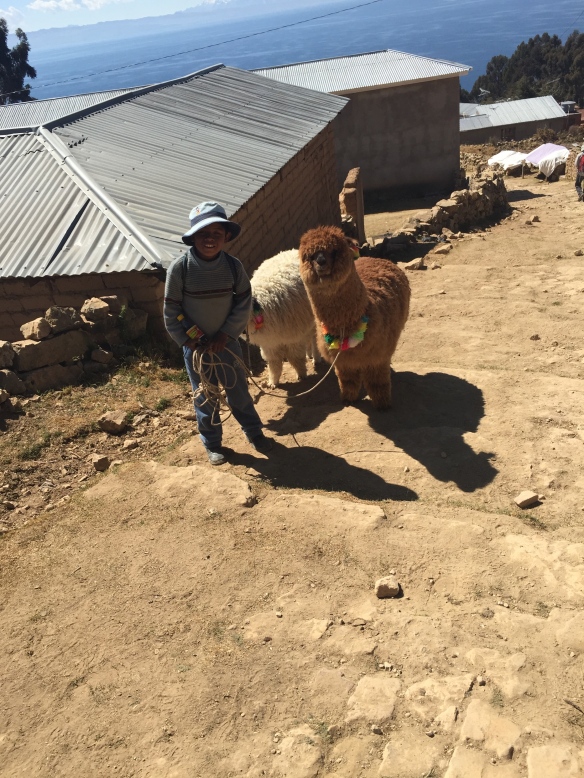 Local boy (who very enterprisingly charged me 2 Bolivianos for the privilege of taking his photograph) tasking his Alpaca for walkies. 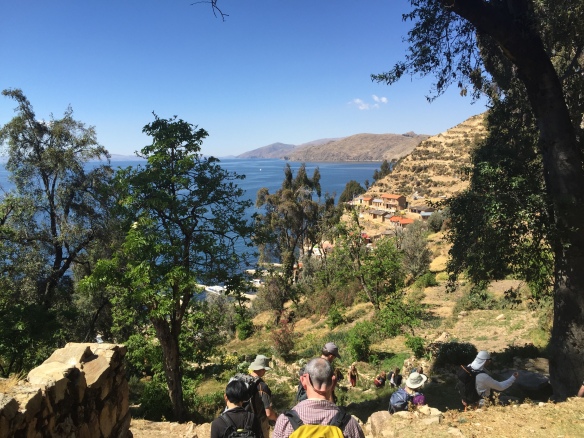 Walking down towards the main port.

And the main source of water for the islanders, apparently the three outlets come from three different underground springs built by the Inca.

After lunch it was back onto our boat for the trip back to Copacabana, the unbroken sun glistening on the water and framing the Andes in the background the whole way. This is a magical and beautiful place in every sense.

A selection of the local produce for lunch, including the largest corn kernels I have ever seen!

and it is time to bid the island farewell….

…and a ride on top of the boat lets everyone enjoy the scenery even more.

When we got back to Copacabana we went up to the and had a look round the markets of the town. Unfortunately there were so many people as to make it a frustrating rather than pleasurable experience, but the day couldn’t be spoilt because of the morning trip.

…and trying to fight our way through the hordes…. 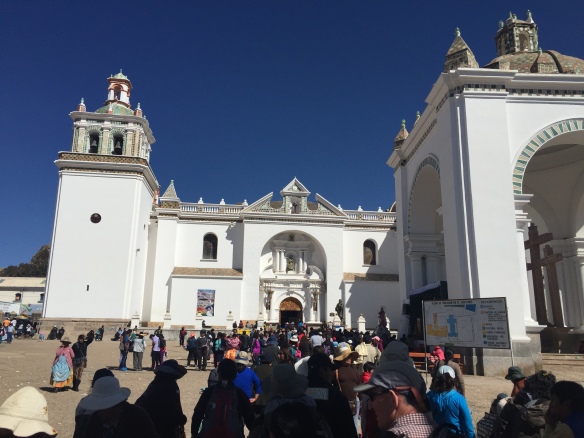 The Basilica of Copacabana, a 16th Century shrine.

After returning to the EcoLodge we ventured back into town for out last ‘proper’ meal of the trip, or at least the last one not in a tent at any rate. Despite a nice meal, the evening was significantly spoilt for one of the two Johns, who had his rucksack stolen in the restaurant from almost under his nose, by whom and how we will never know. He lost jackets, glasses, GPS amongst other things, so the rest of us are trying to cobble together stuff for him to borrow so he can continue his climb. It just shows you that you can never be too careful.

So then it was back to our hotel, the last night in a bed for us (bar one) until the return home to the UK in over two weeks time. Our acclimatisation attempts are over, and if you weren’t ready now you were never going to be. I had taken paracetamol for headaches the last two days, but finally felt free of the need to do so, although a bout of ‘travellers tummy’ reminded me that in foreign climes with substandard sanitation, you were never far away from the wrong side of feeling well.

Bolivia had so far served up some real treats, and had far outweighed my expectations in terms of experience. Tomorrow the ‘real’ adventure would begin – we would head off by bus to the Cordilla Réal and into the Andes. The mountains beckoned at last.