So having had a few days of beer at the Oktoberfest, it was a pleasure/delight and relief all rolled into one to wake up and be heading for the mountains.

We headed off to Garmisch-Partenkirchen by train after an early start, and carried just what we needed for the next few days on our backs. I had booked us into an alpine hut, called the Reintalangerhutte, which was half way up the mountain, for the Friday night, and we would need to walk all day after arriving just to get there before nightfall.

Despite a bad weather forecast, we arrived into Garmisch-Partenkirchen with typical German efficiency exactly on schedule about an hour and twenty minutes after leaving Munich, into glorious sunshine. The winter clothing was heavy on our backs, but we were naturally glad of the beautiful conditions. Shortly after leaving the train station, and after getting stocked up with picnic supplies for the journey, we began the trek – and soon came upon the site of the 1936 Winter Olympics – the famous ski-jumping station – shown in the picture below in the background:

The Olympic Ski-Jumping slopes in Garmisch

By the time we were on our route at the base of the mountain itself it was around 11am, following a little bit of ‘ahem’ bad planning by me (in fact I had no idea which direction our route was going to take us at all, but ‘all’s well that ends well’, as they say:)). Stopping to ask someone how far away the Reintalangerhutte was, we were told six to seven hours, and so figured we’d need to move quickly to ensure getting there before darkness fell.

Shortly after beginning our trek up the Reintal Valley (there are two routes up the mountain, the Hollerental, or the Reintal – we picked the easier route in case the weeather got bad on us), we came upon the Partnachklamm. This is a deep and amazingly beautiful gorge, about half a mile long, which takes you up and through onto the base of the Zugspitze. Some information on it here below:

﻿It was stunningly beautiful, and it came as a total surprise. Here are some pictures in the gorge itself: 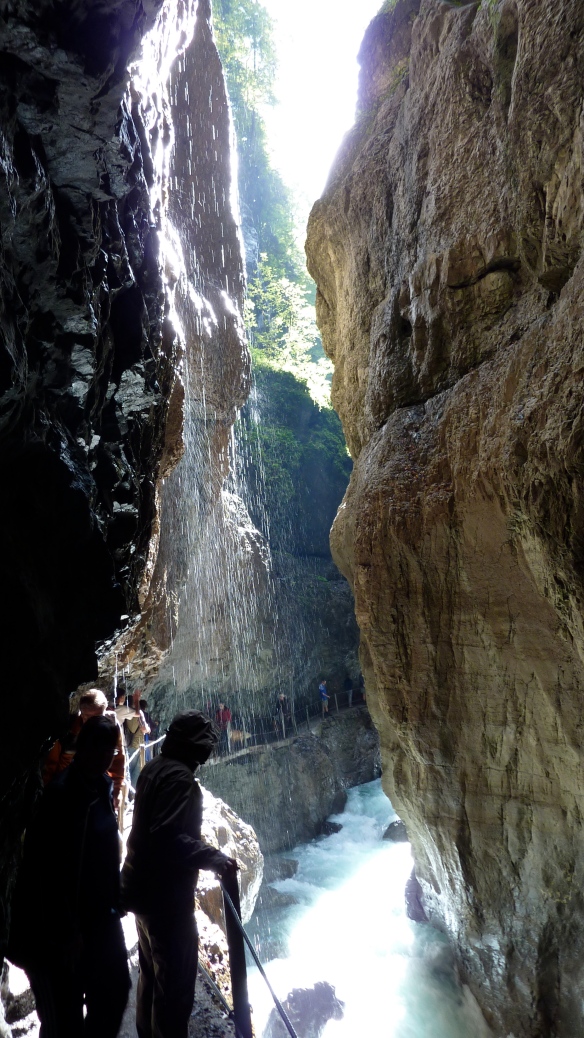 Part of the path plunges you into total darkness, and then you are out to the incredibly loud torrents of water flowing from the mountain. It is glacial meltwater, and an incredible shade of blue. It is literally one of the most stunning things I have ever seen.

Coming out from the gorge and its noise was a revelation, all of a sudden the river became quieter, and the place was beautiful.  A few reviews that I had read beforehand had said that the Zugspitze was not an attractive mountain – they were wrong – take it from me it is stunning. Here are a few piccies from the other side of the gorge: 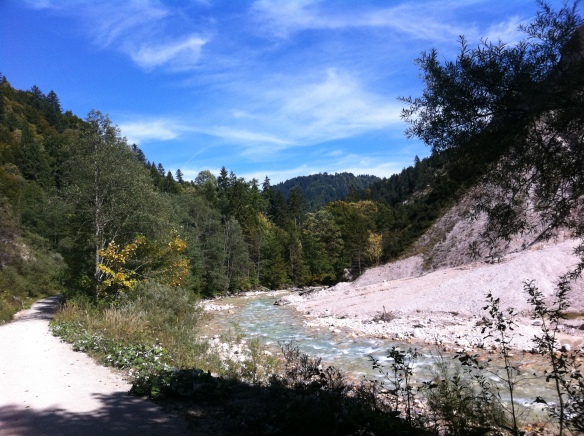 A beautiful day for a walk....

The mountain starts to come into view....

And this was where we stopped for lunch - glorious!

From here the walk began to get much steeper, and we walked for another four hours or so, the path following the river all the way. The weather was so hot all the way, probably 25 or so celsius, and very warm for climbing uphill. I was very glad of my Camelback, and went through almost three litres of water. We passed huge waterfalls and saw the river in almost every stage, albeit it was clearly a very quiet time of year for it – in the spring after the snows melt it must be totally incredible. I made a note at this point I think to say that I needed to come back here, I was engrossed and awestruck by the majesty of this place, it just felt really special.

At about 4pm, and earlier than we expected, we came to our mountain hut. It was bigger than I expected it to be, and quite imposing. It was at about 1,600 metres, or 5,200 feet, basically about half way up as far as ascent of the Zugspitze was concerned.

The hut sleeps about 60 people in total I believe. The best way I could describe it was to be very, well ‘German’. The chap who runs the place, Simon, did an excellent job, and also speaks English, which was certainly a blessing, even though I can get by in my pidgin German. The accommodation is basic, but clean, and was certainly very welcome.

Dormitory sleeping arrangements, Zugspizte style - this room slept 20 or so

After a hearty dinner, and a few glasses of beer, it was off to bed. We were to be woken by the staff at 6.30am for the trek to the summit. Before we went off, the weather outside turned wet and cold all of a sudden. I spent what I can only describe as a fitful night listening to the rain, and was awake by 4. I was rather worried that at the altitude we were at, that the path might become tricky higher up. And by morning, sadly, that was to prove very much the case.