So Day Two of the 24 Peaks Challenge began pretty much the same way as Day One had – with a 4am start! The one saving grace was that the herd of elephant children who had plagued our rest the night before, were probably all as tired as we were, and so everyone at least got a quiet night, unless anyone in the dorm heard me snore that is!! We were also two people down for day two – Peter and Margaret had decided overnight that there were much better ways of celebrating their anniversary than slogging away relentlessly up 24 peaks in two days – and I couldn’t blame them for that!

With breakfast and making sandwiches out of the way for the remaining six by about 5am, the trip to the drying room to pick up our kit revealed that it was every bit as damp as it was the night before. I was immensely glad that I had brought with me a spare pair of boots, even if mine were pretty dry-ish. The rest of my stuff though was sodden and heavy, not a good start to the day, even if the forecast didn’t look too bad – “early cloud, followed by lightning storms in the afternoon” sounded good compared to the monsoons the day before.

Stepping out of the hostel the cloud was low, but everything was unbelievably calm – and so incredibly beautiful that I could have stood there forever. 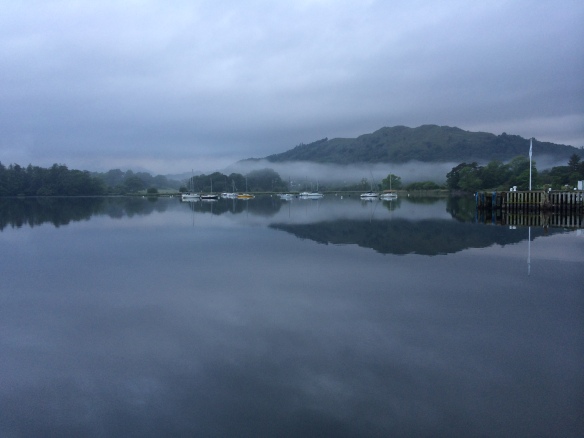 ….and to the North West.

I find that the Lake District like this is the most majestic, captivating, and inspiring place almost of all places I have ever been. This was to be ultimately such an utterly fabulous day for beautiful Lake District vistas, that I simply never wanted it to end. How lucky I am!

And so before I knew it, we were back in the bus, this time heading for the North Eastern fells, and principally those on the Helvellyn range. Alighting around 6.20am at the top of the Kirkstone Pass, we headed straight up the steep ascent of Red Screes, a veritable stiff pull if ever there was one. Unfortunately however, we were already well into the cloud by the top of the Kirkstone Pass, so the climb up was about as unscenic as it could ever have been.

Ascending the steep drag up Red Screes – at least it wasn’t raining!

Once at the top of Red Screes, we ascended over boggy moorland before starting the climb up towards Dove Crag and Hart Crag, which were fairly swiftly despatched. Passing Hart Crag we realized that we were now more than half way to our challenge (i.e. 13 peaks down out of 24), but realized in the same moment that there was still a very long way to go.

The next ascent was that of Fairfield, at the top of the horseshoe range at the top of the Ambleside valley. Fairfield is a fairly flat top, but features no pictures here, and afforded no views, as the cloud was so low and thick as to render our eyes almost useless. In fact we had to navigate off Fairfield to find the path down (or Matt and Kate, our guides did anyway, doing a double compass navigation to be sure).

There then followed a huge and steep descent down to Grizedale Tarn, where we had a break for lunch to get some energy before attempting the Helvellyn range, and also something quite remarkable happened – the cloud lifted!

Descending towards Grizedale Tarn – hard work, but helped by the views at last!

Up until this point, everyone had been pretty cold still, as we were all clad in yesterday’s soggy waterproofs, and it was dreary and windy inside the clouds. The lifting of the cloud made everyone feel better, and the realization that once up the steep climb of Dollywagon Pike, our next objective, we would be on the tops for a while, and be able to rattle off peaks number 14 to 18 in reasonably quick succession.

The climb up Dollywagon Pike was fairly hard work, but with the brightening skies was so much more enjoyable than almost anything we had done so far. The wind by now had also picked up too, and it was really gusty and strong by the time we reached the summit at around 2,800 feet. 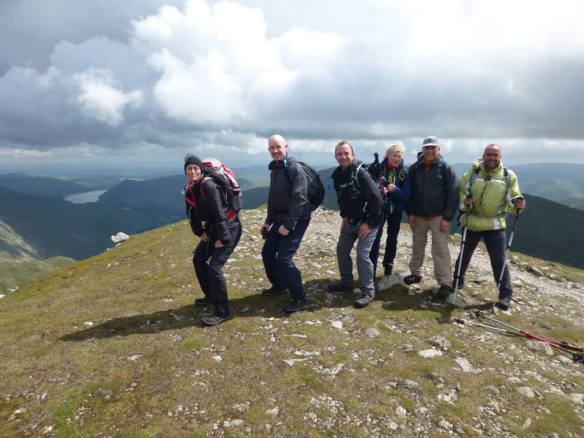 Dollywagon Pike summit – don’t ask what we were doing!

From the top of Dollywagon Pike, the next four objectives were almost laid out in front of us (helped so significantly by the fact that we could now actually see!), and we quickly notched off Nethermost Pike, and Helvellyn, passing by a great view of Striding Edge and Ullswater. 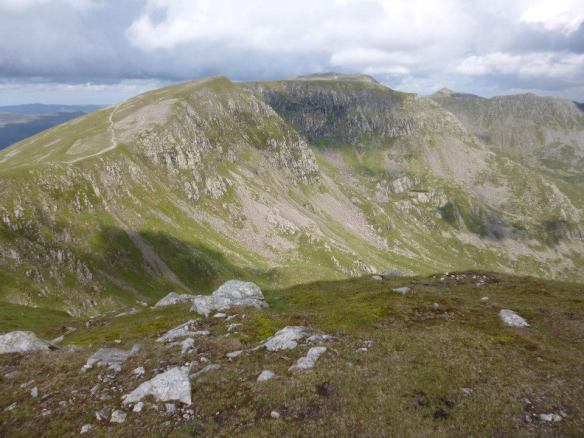 The view towards Helvellyn, centre in the distance, and Nethermost Pike (foreground) from Dollywagon Pike.

I want to stop and mention the above picture. It was taken for me by Lucilia as my camera was feeling a bit wet and sorry for itself at this point, so she kindly obliged when I asked her to do so. The above view, whilst probably fairly innocuous looking, is I think my favourite view in the whole of the Lakes.

There are prettier vistas for sure, but for me it captures so many things: A part view of Striding Edge, the first walk I ever took in the Lake District as a teenager; the side of Helvellyn, my favourite Lake District mountain; Ullswater, such a fabulous unspoilt lake, and my favourite lake too; and down below the villages of Glenridding and Patterdale, evocative of magical and never to be forgotten childhood memories of my first treks to this beautiful land. The view is also one almost the same as a picture I have hanging in my house by Alfred Heaton Cooper, my favourite artist, and a Lakeland stalwart whose studio sits a few miles away in Grasmere, about which I will wax lyrical another time!

I stood here at this point and had a mixture of feelings from wanting to punch the air for joy, and tears of almost unbridled emotion (yes, really!) which well up in me even now as I write about this a week and a half later. That is what this place does for me, and more. That is why I go back, and why I will always go back to this corner of the Lakes.

Anyway, on with the walk :)…..after a very windswept summit of Helvellyn, we headed north to Browncove Crags, before doubling back up the slopes we had just left to summit Lower Man (actually a subsidiary peak of Helvellyn) at 3,034 feet. This brought us to 20 peaks, and by now we knew (or I did, anyway!) that we would finish our challenge. It was a great feeling, and put a renewed spring in my step. In fact Matt, Ian and I literally fell-ran down the ridge off Lower Man towards the Dodds, which was totally invigorating.

From here there were really only one or two final pushes involved to get us up to the Dodds range, a much grassier domain than we had had previously been on, and a nice way to finish (well nearly anyway) our weekend. We first ascended Whiteside, and then Raise (peaks 21 and 22) in quick succession, before heading for the Dodds themselves. There are three Dodds I believe, but we only needed to do the two closes ones, being Stybarrow Dodd and Watson’s Dodd. And we’d done it! Watson’s Dodd is a bit of anti-climactic finish I have to say, if only because it is a flat, marshy, fairly featureless drag, but nonetheless it is 2,588 feet high, and our final objective, so it is forever memorable!

And then all we had to do was descend, which we did via Thirlmere to our waiting minibus. There was still a long trek out, and this took us the best part of an hour and a half in what was finally bright and warm sunshine, a very fitting and perfect end.

In the car park at the edge of Thirlmere we met up with Jim our driver, and also Peter and Margaret, who joined us for champagne celebrations and a medal ceremony, which was a nice touch indeed.

Everyone happy and descended with medals to show for our endeavours.

I have to say that Global Adventures were brilliant throughout, with great organization and communications before and throughout the event. Both of the guides too were excellent, and allowed us to enjoy our weekend to the max, whilst providing exactly the right level of support when needed on the hills themselves, including the priceless navigation in the direst of conditions on Day One.

The route chosen for day two was the best walk I have ever done in the Lake District, and as I may have alluded to earlier, I’ll most definitely be back 🙂